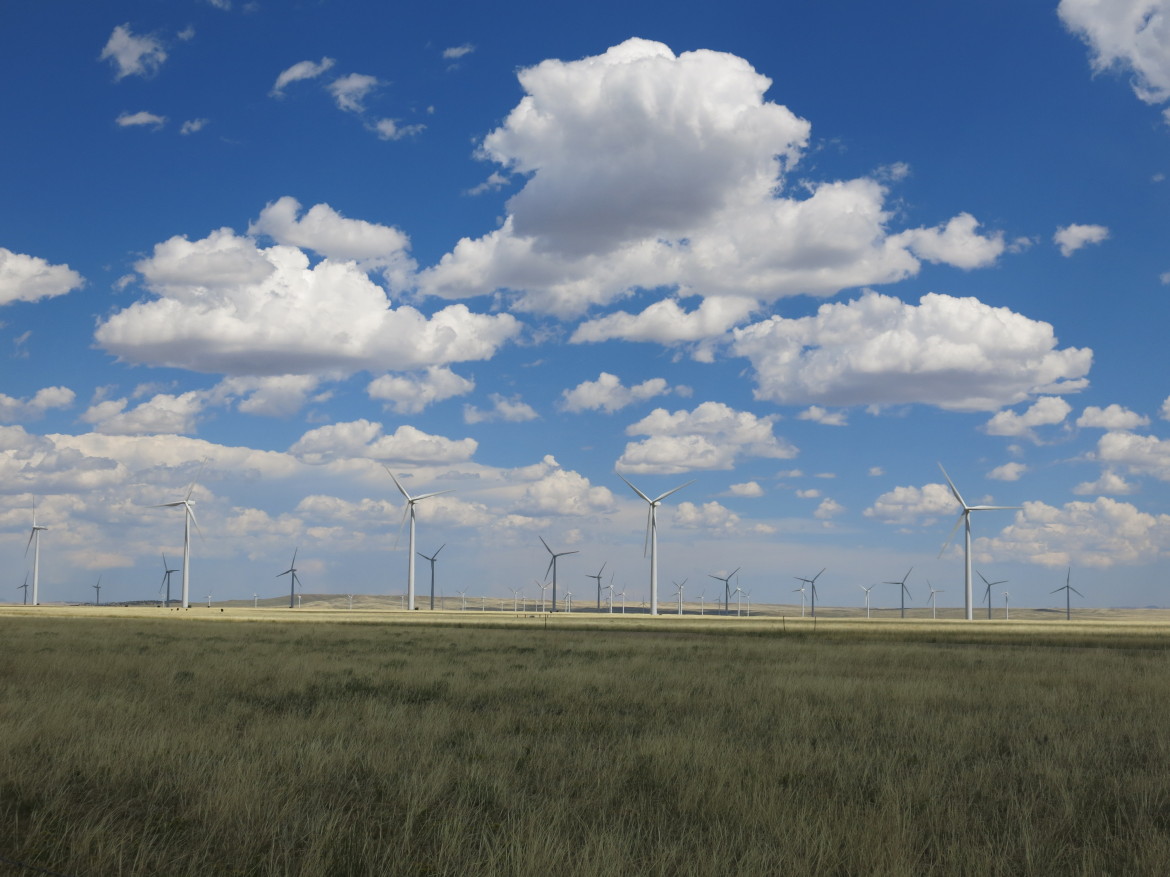 Update: On January 30th, the Bureau of Land Management announced that three key infrastructure parts of the Chokecherry and Sierra Madre Wind Project had passed environmental review.  Approvals of the wind turbines and transmission lines are still in-process.

Standing under a trio of shiny wind turbine blades, slicing through the air, the sound is deafening.

“They’re about 80 meters tall,” Laine Anderson explained.  He is a project manager with PacifiCorp, the utility company that owns High Plains Wind Farm. “When the wind is blowing a certain speed, you can hear the wind turbine operating and the blades whispering in the wind.”

On the day of my tour, the sun was shining, the sky was clear and the wind was blowing like crazy.

“Wyoming is an excellent producer of wind, every day, day in and day out,” Anderson said.

And Wyoming wind is indeed legendary.  When I first moved to the state, people routinely warned me about driving in the winter, because it wasn’t uncommon for cars to be literally blown right off the road.

University of Wyoming’s Wind Energy Research Center claims the state has the best land-based class 6 and 7 wind sites, a categorization based on wind speed and power generation.  But according to the American Wind Energy Association, Wyoming ranks just 14th in installed wind capacity.

The proposed Chokecherry and Sierra Madre Wind Energy Project could change that.  In August, Wyoming issued the last necessary state permit, and if the wind farm gets federal approval, it will be the biggest in the country with 1,000 turbines that could generate up to 3,000 megawatts of energy.

But for now this is all hypothetical, because the transmission capabilities that the Chokecherry project requires just don’t exist.

“In Wyoming, we have a great house and a relatively poor location.”

In his metaphor, the house is the wind power generating capacity; a poor location in that Wyoming is really far from the states that could use its wind energy.

“And in order to overcome that location, we need to build transmission line and those are expensive.”

Thee billion dollars is the projected cost of TransWest Express, the transmission line that would carry some of Chokecherry’s power 725 miles to a station in Nevada.  Both projects are backed by The Anschutz Corporation, a  Denver-based energy conglomerate. In order to build transmission, Anschutz and other developers will have to cut through a lot of private land. Niels Hansen, a Wyoming rancher, expects a wind transmission line to eventually cross through is property.

That includes ranches, like the one Niels Hansen owns near Rawlins, Wyoming.  He drove me up over a fiery-red butte to get better look at the land where Utah-based Rocky Mountain Power plans to build a long distance transmission line called Gateway West.

And he’s been fighting it ever since the first letter arrived in the mail.

“I wrote back and said you’re not welcome one our property. Stay off until you give me specifics of where you want to go and what you wanna do,” Hansen said.

A few years later, Hansen has now worked out some of his concerns with Rocky Mountain Power and Wyoming’s Bureau of Land Management.  But communicating through these public meetings was not easy.

“You can’t have a meaningful conversation with anybody and get any real details or express your concern in detail.  To get involved in the meetings that Gateway was having with the (Bureau of Land Management) for example, it was really tough to crack in there so I had a seat at the table, so I could participate in those conversations and put concerns on the table and get these issues out there so it can be discussed,” Hansen said.

Private landowners aren’t the only barriers to companies trying to build long distance transmission.  In the case of TransWest, two-thirds of the land it will cross is federally owned.  So, I asked Wyoming’s Bureau of Land Management to walk me through the permitting process.

“Once the record of decision is issued, we grant a right of way, and then there is a notice to proceed that actually allows them to break ground. But we’re not the only entity they have to deal with to get this built,” Beverly Gorny explained.

On the state level there is also Utah, Colorado, Nevada, and maybe even counties.

“They have many, many i’s to dot and t’s to cross before they can actually break ground,” Gorny explained. So, why on earth would anyone want to get into the costly, complicated business of wind generation and transmission?  Rob Godby of the University of Wyoming says the combination of the EPA’s proposed emission standards, and the growing number of states that require a percentage of their energy come from renewables makes for a strong bet.

“The business case is to bring renewable energy from Wyoming where there is a very good resource and take it to the largest power market in the western grid which is California.  But like anything else, that remains to be seen, so it is a gamble.”