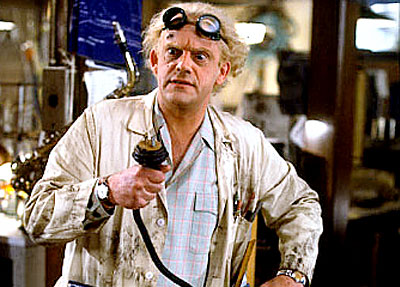 Like most human beings ever, I love Back to the Future.

I spent countless hours of my childhood running around my backyard making crackly-swishing sounds, pretending to be behind the wheel of a souped-up time-traveling DeLorean (I was crushed to find out real DeLoreans don’t have giant exhaust vents attached to the vehicle’s rear). I probably watched those three classic films more than any others growing up – ok, besides maybe Jurassic Park and the first two Terminator movies.

One of my favorite things about those movies as an 8-year-old was they seemed so science-y, so rational. I really felt for 1950s Doctor Emmett L. Brown when he had to solve this engineering problem, as conveyed to him by the 1980s version of himself:

At least, that’s how he pronounces it: “Jigawatt.”

Marty McFly follows up with the deceptively astute question, “What the hell is a jigawatt?!”

What the hell, indeed.

One day, a few weeks back, I was daydreaming on the job (for just a minute, I swear) and it hit me: Doc Brown was talking about 1.21 gigawatts!

In this energy reporting gig, we talk about gigawatts like they’re goin’ outta style – even though they are definitely not. But everybody I know always pronounces the word with a hard “g,” like this:

And I had a little bit of a sinking feeling.

Was Doc Brown wrong? Did the brilliant linguistic coaches responsible for so many other beautifully-pronounced words in Back to the Future make a rookie mistake? Does the mispronunciation betray a pitiful naiveté in the entire film trilogy and, ultimately, the notions of time travel and fun all together?

I was kicking around the internet and found this post on myfluxcapacitor.com (a site that, of course, exists):

I always figured that the word “Jigawatt”was made up just for the movie and meant to sound like a really large amount.  It wasn’t unit I started researching this flux capacitor replica project that I stumbled across a few references to the actual term.  It turns out that the original pronunciation of “Giga” was with the “j” sound (really a soft “g”).

The author pointed out that the Merriam-Webster website had two correct pronunciations for the word: A leading “j” and “g” are both acceptable.

The post contains an update saying Merriam-Webster dropped the pronunciation with the “g” – leaving only the “j” one – earlier this year.

I think I’ll probably stick with the hard “g” version.

But at least I have a renewed faith in Dr. Emmett Brown, and in time travel as a legitimate hobby – as long as you kind find enough energy.

Oh, and a definition:  A gigawatt is a unit of power equal to one billion watts.