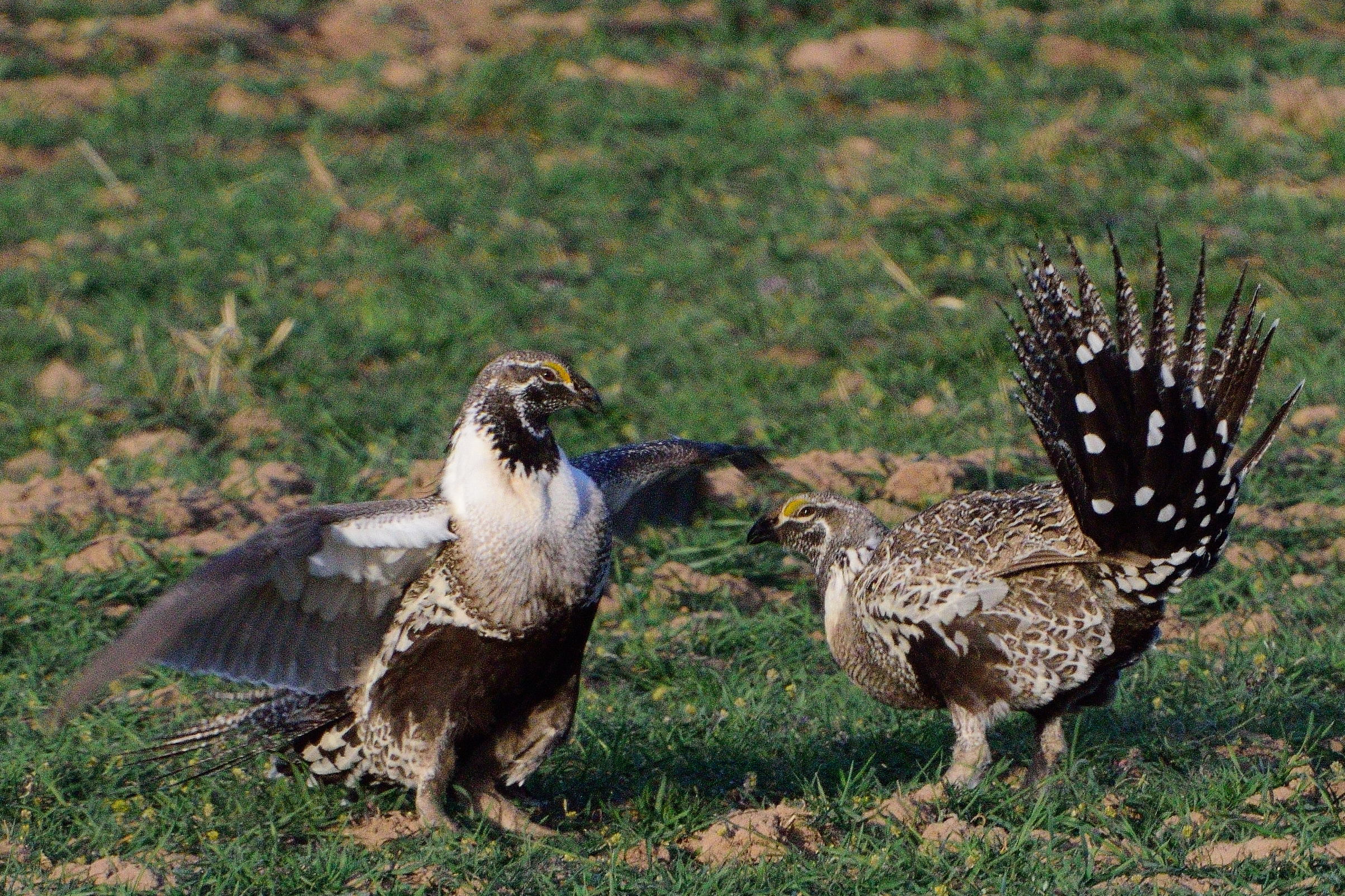 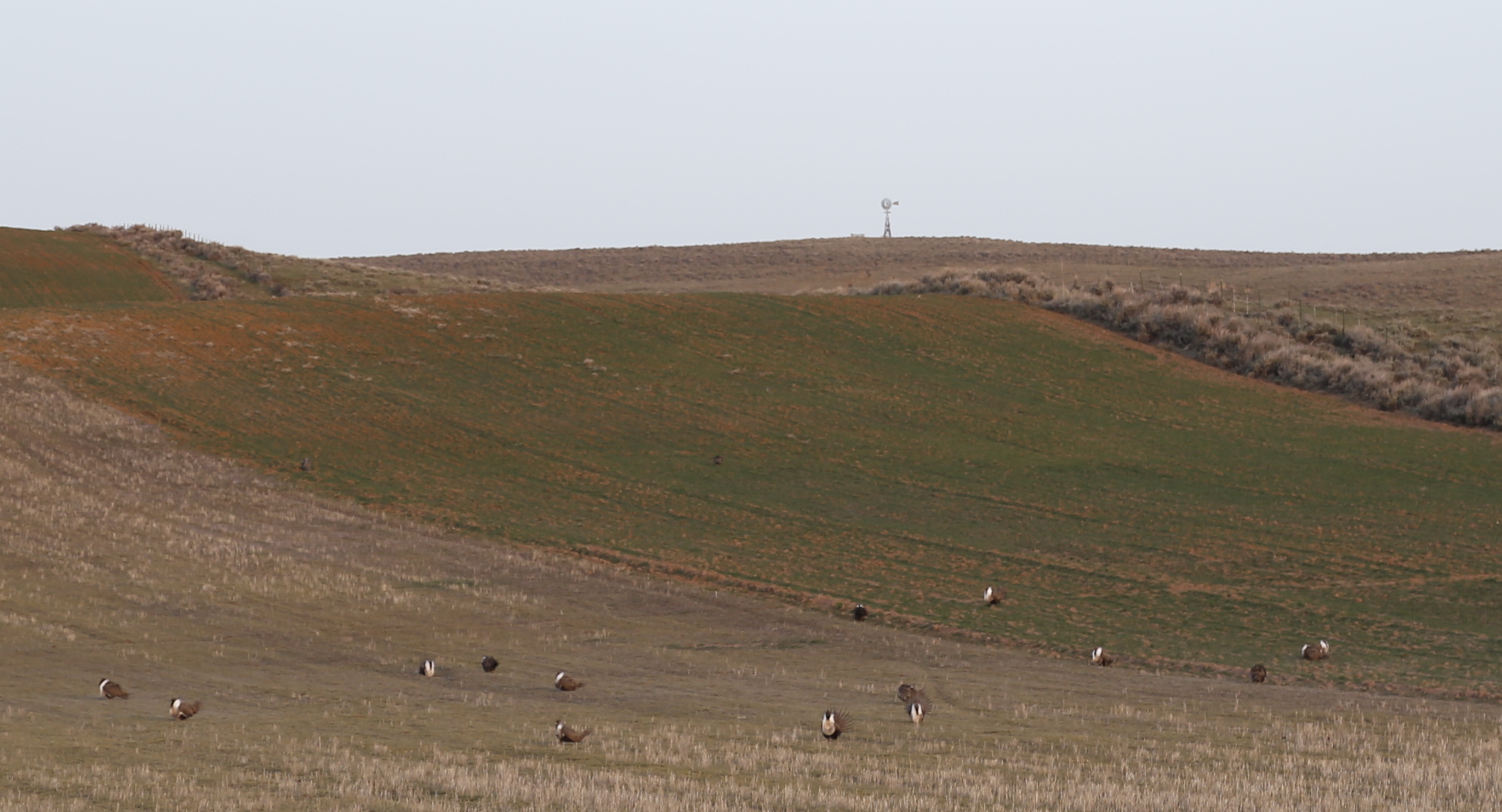 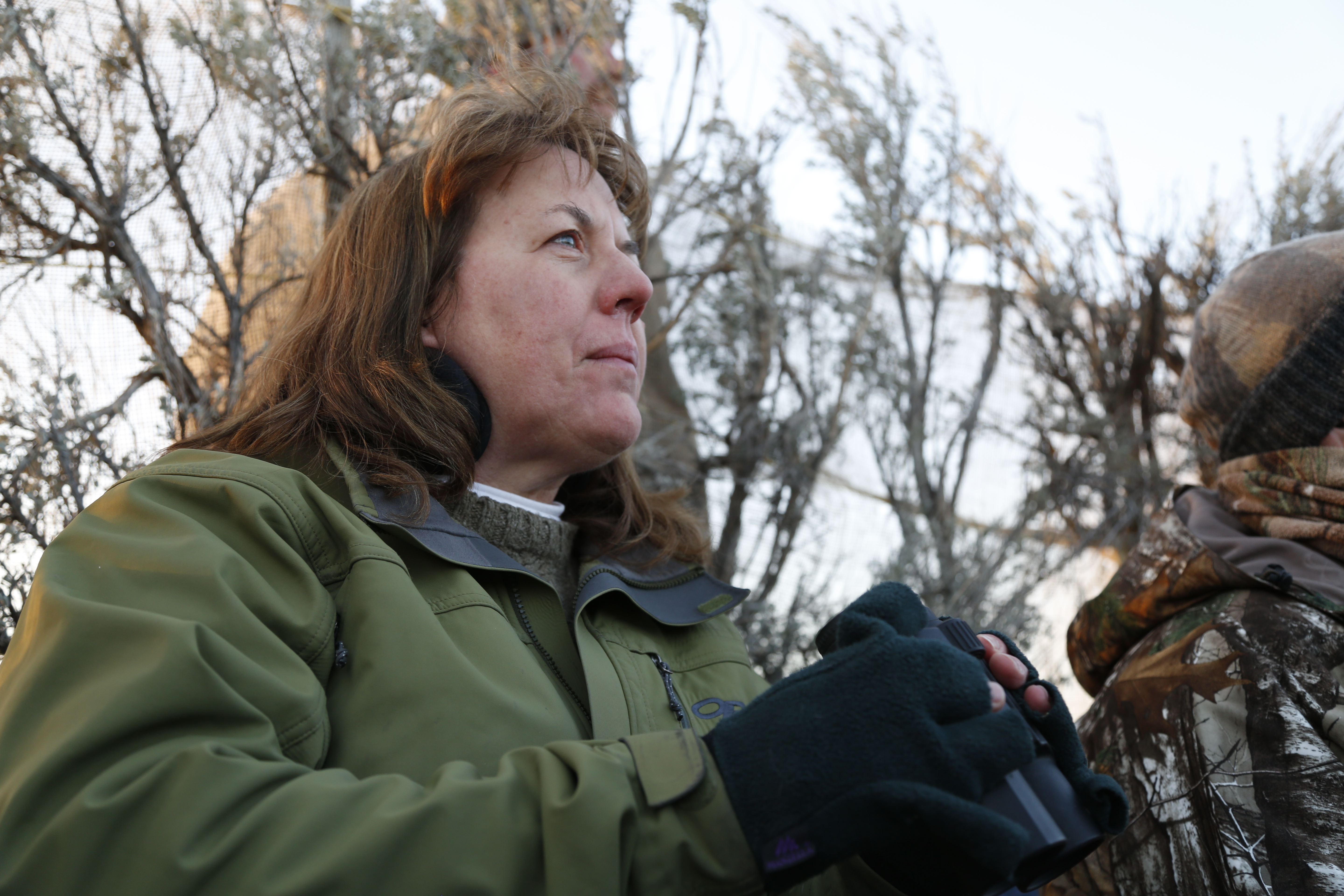 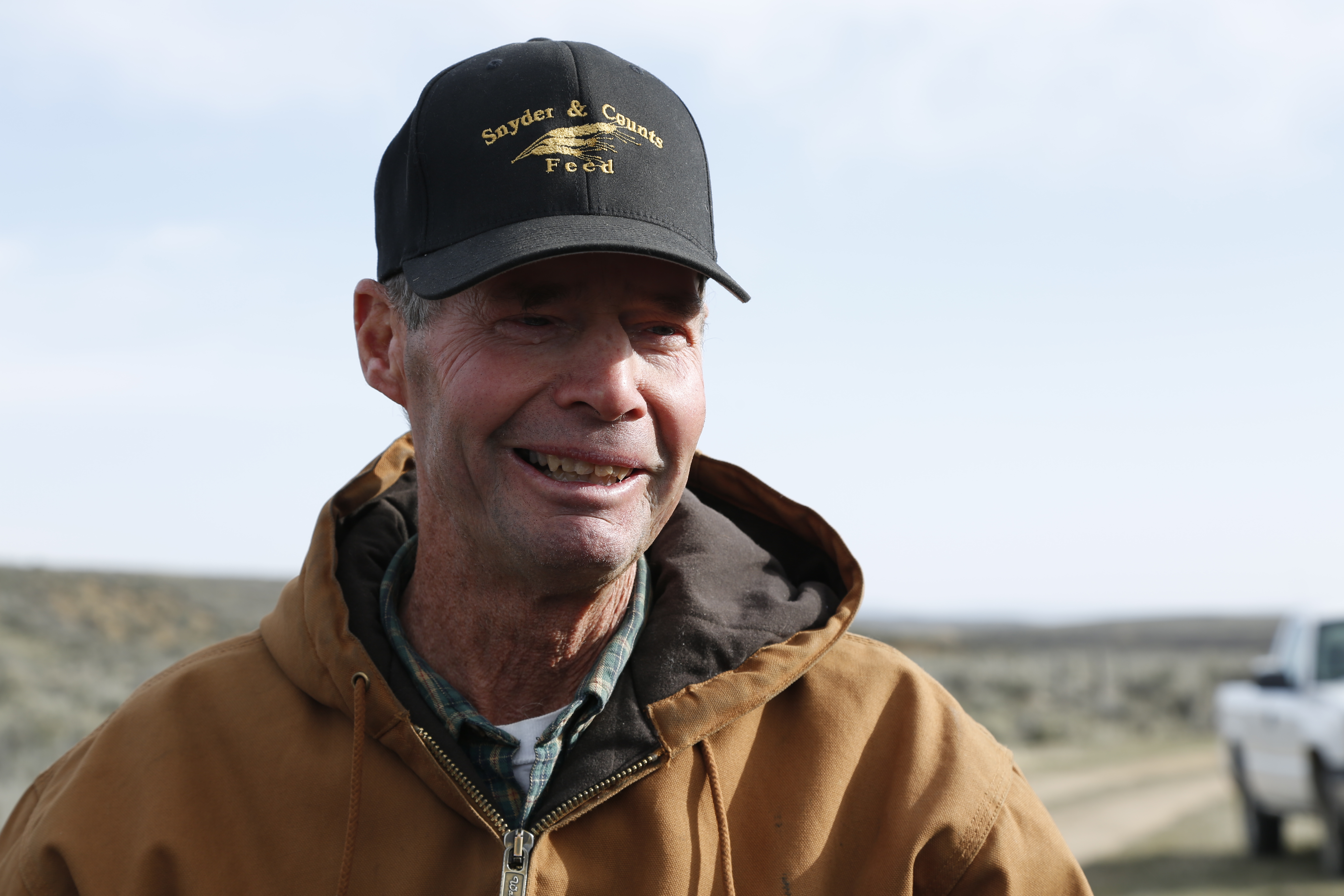 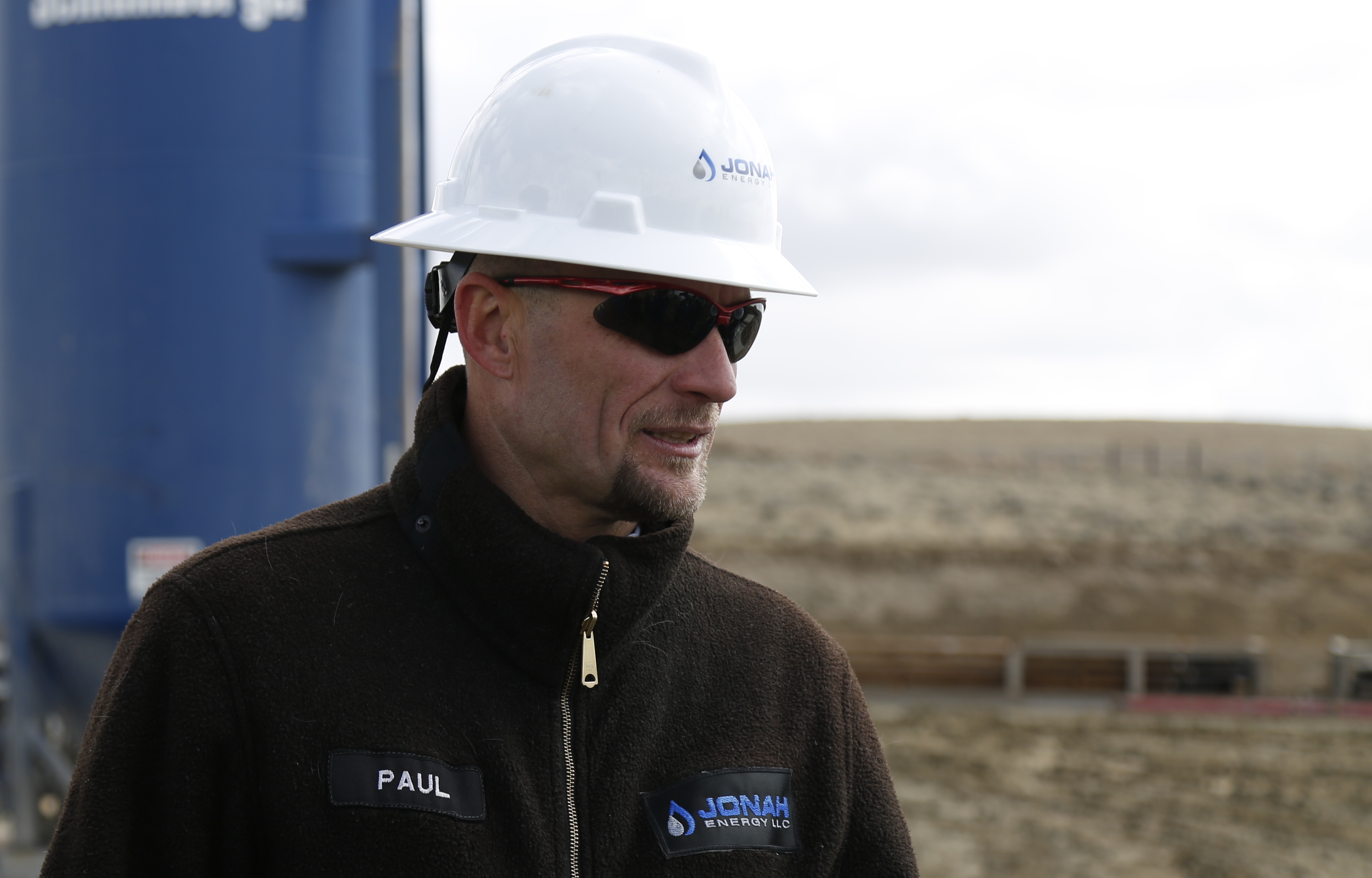 They were in an open field of recently-planted rye. Biologists call such a gathering a lek, where male grouse perform an elaborate mating dance that involves inflating two yellow air sacks in their chest and then releasing the air with a bubbling pop. The national sage grouse coordinator for the U.S. Fish and Wildlife Service was watching the spectacle, her gloved hands holding binoculars tightly to her face.

“This is the biggest lek I’ve seen on agricultural lands,” she said.

Pat Deibert’s agency will decide at the end of September if this bird should be listed as endangered. That’s something many people out here don’t want.

“Nobody likes the red tape, you know, the federal government bureaucracy stuff,” Wes McStay said, who allows conservation groups to host “lek tours” on his ranch.

A listing of the greater sage grouse under the endangered species act could deeply affect the industries making up the backbone of the Western economy like agriculture, oil and gas and mining.

An unprecedented collection of stakeholders across 11 states are working to save the bird’s population before the federal government steps in.

“I’d much rather us do it cooperatively,” McStay said. “Try a different way.”

McStay partners with the Sage Grouse Initiative, a multi-state effort wherein ranchers agree not to over graze habitat and the initiative gives them money to fund range improvements that should be good for both livestock and grouse.

Organizers says the key is targeting lands where they will get the biggest bang for their conservation buck, since even in large expanses of sagebrush, the birds tend to clump together in large numbers.

Nowhere is more important than Wyoming, where nearly forty percent of the entire sage grouse population lives. Wyoming is running the most proactive program in the country to save sagebrush land — significantly restricting development on nearly a quarter of the entire state.

A state-appointed Sage Grouse Implementation Team (SGIT) set aside this core area habitat in 2008, with the hope that minimizing disturbance on this much land will protect more leks and bring population numbers up. SGIT members include conservationists, representatives from agriculture, mining, government agencies and oil and gas.

Paul Ulrich of Jonah Energy is a member of the team. He met a group of reporters at one of the company’s natural gas drilling pads in Southwestern Wyoming. The trucks, rigs and tanks give what used to be rolling hills of sage brush a much more industrial feel, and Ulrich didn’t shy from that.

“There’s no question that you’re going to have short term impacts that need to be mitigated,” he said.

Ulrich said oil and gas companies have spent millions on sage grouse research and restoring habitat in this area. The problem is determining what’s the most important habitat is a shifting target.

Jonah Energy has leased more than 140,000 acres near its current operations where they hope to drill 3500 more wells.  In the last couple of years, biologists have discovered that nearly 20-percent of that land is pretty important for the grouse.

“We found that we have 2,000 birds wintering in this one area,” Deibert said, adding losing winter habitat can significantly harm bird populations.

SGIT is presenting a five year core area strategy update to Governor Matt Mead at the end of the month. The team is recommending special care be taken with key winter habitat like in the lands leased by Jonah Energy. Ulrich said his company will hold off on oil and gas development on those grounds until after a government review finishes next year.

“It’s in our best interest to make sure that we get it right,” he said.

Near to where Ulrich was leading the tour for reporters, a former natural gas drilling pad was being restored to it’s natural state. Right now, it’s just grasses, with some tiny little sage brush poking out here and there. Restoration of this land into full sagebrush habitat could take as long as 50 years.