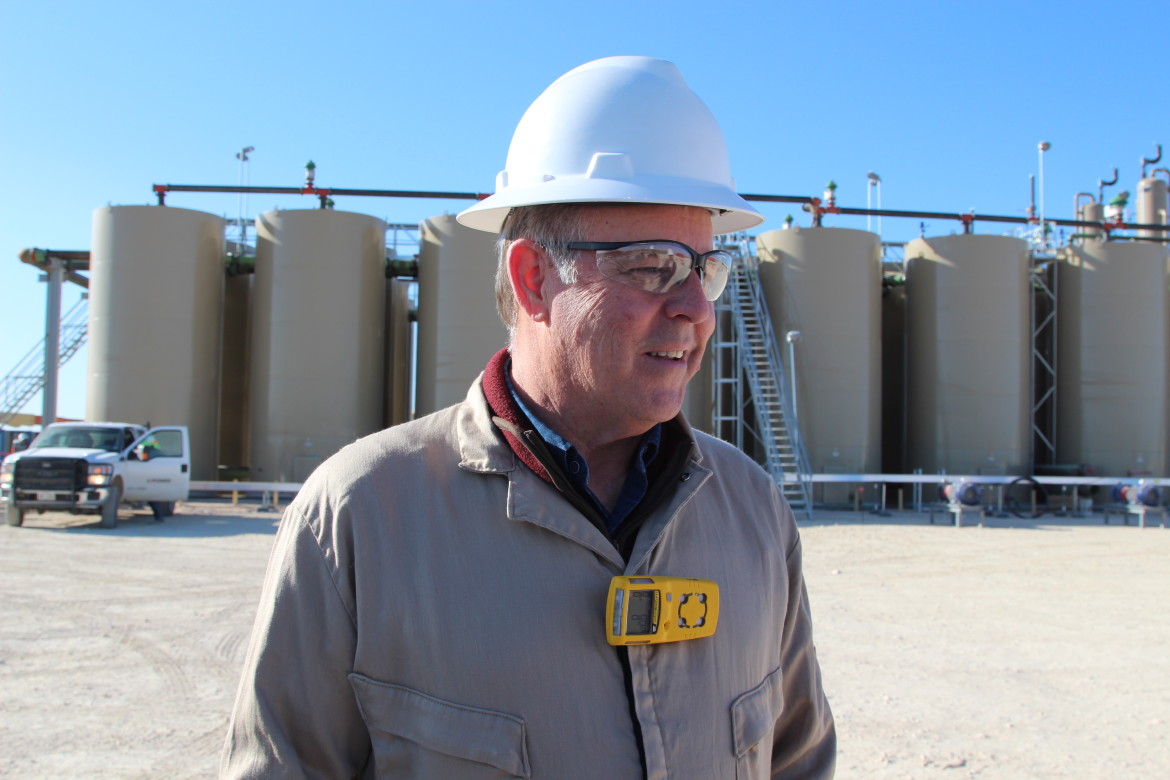 In every downturn, there are survivors who position themselves for recovery. The price of crude oil is down by more than 70 percent since the summer of 2014. Oil and gas companies once flush with cash have cut exploration and decommissioned up to two thirds of their rigs. Many companies have gone under and hundreds of thousands of people are out of job.

Kenny Scudder is the Vice President of Sales for Palmer of Texas. His routine consists of constant travel from Texas to other energy states like Louisiana, New Mexico and Oklahoma.

We accompanied Scudder in the oilfields of the Permian Basin, the country’s highest-producing oilfield, near Midland, Texas. It’s a windswept expanse of flat high desert flatland, and the oil and natural gas that are extracted here are part of an energy complex that represents a key driver of the U.S. economy.

Scudder was calling on some of his his oil and gas customers and their contractors. Palmer of Texas makes storage tanks and separation equipment for oil and natural gas producers. Separation involves extracting crude oil or natural gas from underground rock formations. But right now, the energy business is hurting.

I asked Scudder what the downturn has meant to him and his colleagues.

“I’m with a manufacturing company, and pain to us is less bookings, less revenue, less shipments,” he said.

But Scudder explained that the company has adjusted to position itself for energy’s inevitable bounce back.

“You downsize your workforce, you have pay cuts, you diversify into other areas other than oilfield areas, so as a manufacturer, that’s what you do, you look for other avenues to keep your plant open, to keep your people busy so that when it does pick up back up again, you’re ready to ramp back up where you need to be.”

Palmer of Texas has diversified by makings filters for aquariums in places like SeaWorld. The company is also making storage tanks for a water reclamation plant in Los Angeles County, California .

“One of the upsides of a downturn is if you have a strong balance sheet, if you’ve made wise investments during the last boom, you can still maintain your business and expand and get ready for the next upswing,” Scudder explained.

Scudder says he is fortunate in that he can diversify. The company kept cash in reserve during the boom and his storage tanks can be tailored to suit multiple purposes. But oil producers only have one product and for them, diversification is not an option.

I spoke with David McDow, a construction foreman for one of Scudder’s customer’s contractors.

He described the ordeal of a falling energy market in stark terms.

“Really painful. Lot of people being laid off,” he said.

His hands speak to a lifetime of work in the oilfield. His face is burnished by the heat of oilfield operations and the Texas sun.

“I’m fortunate that I’m not laid off but I’ve had to come, 500 miles from my home to work. Everybody’s hungry. All of our competitors are hungry too just like we are. A lot of them will take jobs for nothing. And that makes it tough on everybody,” McDow said.

McDow says his 40-year career in energy has consisted of peaks and valleys. He said that he can at least visualize the next peak.

“If you want to drill a well, right now’s good time to do it. You know, everything, you can get a good deal on it if you’ve got the capital to work with.”

Distressed companies here are selling off assets—or themselves entirely—to buyers from China and Mexico anxious to snap up a good deal. Major players like Chevron, Shell and BP are also making huge layoffs but analysts believe they’ll be stable financially once the dust clears. Analyst Jordan Goodman said that even smaller players with cash in reserve will emerge stronger for the pain they’re dealing with now.

“You can thrive because you’ll be one of the few left over when all of your competitors go under. So in the long run, the strong will get stronger. The weak will go bankrupt,” said Goodman.

At least 51 American oil and gas companies have filed for bankruptcy as of early March, according to the Haynes and Boone Oil Patch Bankruptcy Monitor. But companies like Palmer of Texas —and there are hundreds in Texas alone—-are hunkered down now with an eye on future profit.