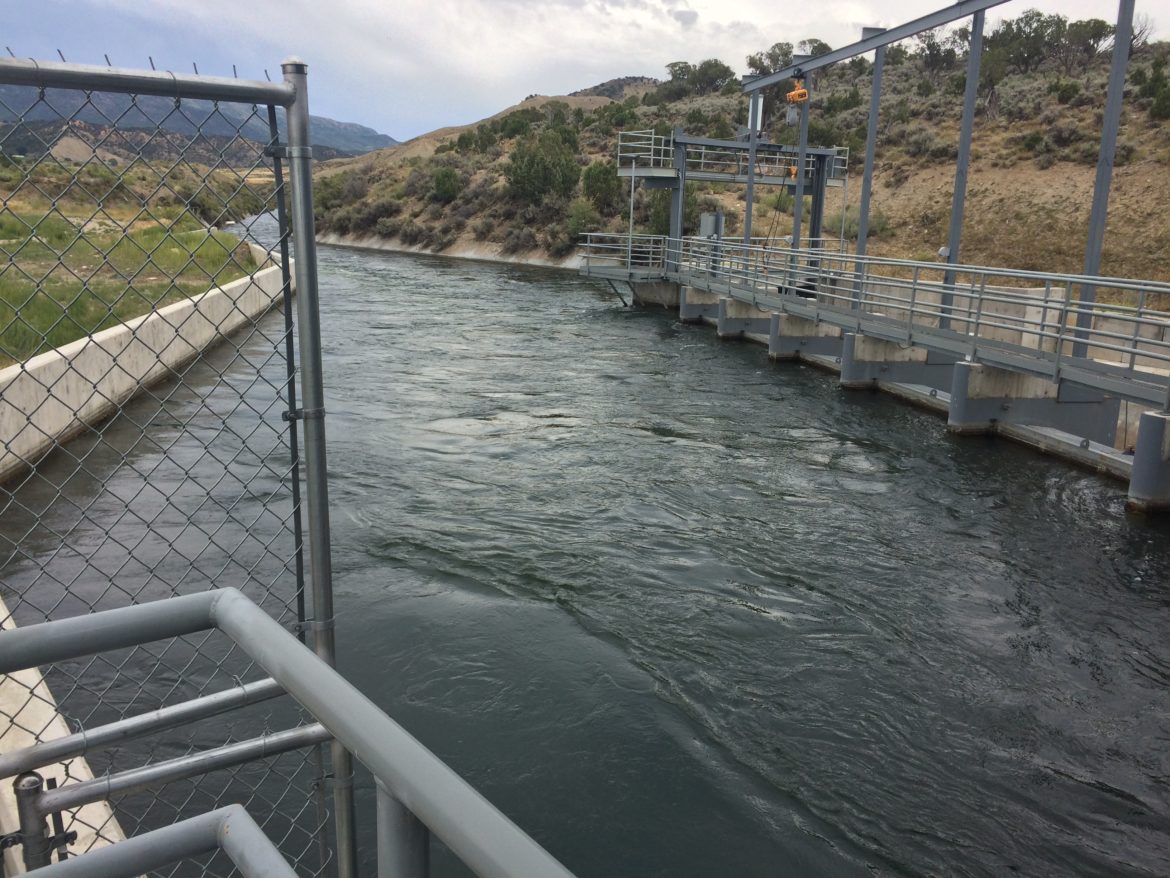 In the 1930s, rural electric cooperatives brought electricity to the country’s most far-flung communities, transforming rural economies. In Western Colorado, one of these co-ops is again trying to spur economic development, partly by generating more of their electricity locally from renewable resources, like water in irrigation ditches and the sun.

Local leaders say that’ll be good for the economy and the environment. The electricity will be clean and affordable, and the revenue from generating it will stay in their communities. But this prospect has started a high-stakes legal battle. It’s pitted renewable energy advocates against traditional wholesale power providers, and it’s a fight that could help define the future of electricity generation in rural communities nationwide.

Outside Montrose, Colorado, Jim Heneghan and I stood on a catwalk over the South Canal. It was a warm August afternoon, and swallows darted across the water. The canal delivers irrigation water from the Gunnison River to local farmers. But Heneghan is not a farmer.  He is an engineer with the Delta Montrose Electric Association, or DMEA, the local electric co-op. And he harvests something else from the water: electricity.

“It’s a pretty simple process, tried and true,” Heneghan said. Water enters a pipe just below us, and flows a quarter-mile downhill, where it spins a turbine and generates power. This plant, Heneghan explained, makes enough electricity to power about 2,200 homes for a year.

There are a few more like it on the canal, and plenty more irrigation ditches in the area to plug turbines into. There are more rooftops and vacant land to blanket with solar panels. There’s even methane seeping out of a defunct coal mine that can be turned into electricity. DMEA leaders want to tap more of these resources, said board president and local businessman Bill Patterson. They think this kind of power, generated in small doses across the local landscape, is the future.

But DEMA has a contract that commits them to buying power from Tri-State Generation and Transmission until 2040. DMEA doesn’t want to wait that long to ramp up local generation. So they’ve gone to the Federal Energy Regulatory Commission to ask for permission to start now. Joseph Goodman of the Rocky Mountain Institute, a clean energy think tank, said the case could remove a major barrier to small-scale renewable energy in rural areas. “DMEA is really taking one for the co-op family as a whole by bringing this case forward,” he said.

DMEA is one of 43 rural utilities in Colorado, New Mexico, Wyoming and Nebraska that buy power from Tri-State. The co-ops actually created Tri-State decades ago because none of them could afford to build big power plants on their own. “There’s an economy of scale that small rural co-ops get by combining together and forming organizations like Tri-State,” said Lee Boughey, Tri-State’s communications manager.

Boughey explained that co-ops’ contracts commit them to buying 95 percent of their power from Tri-State. Much of that power comes from large, centralized power plants, often fired with coal. The co-ops are allowed to generate the other 5 percent of their own. The contracts ensure that each co-op pays its fair share of fixed costs — for maintaining transmission lines, or paying off power plants. If one co-op buys less from Tri-State, thereby reducing its revenues, other members will have to make up the difference, Boughey said. Their costs could rise.

But Patterson says DMEA’s members believe local power generation is key to keeping rates low in the long-run. With the cost of coal becoming increasingly uncertain, and the cost of renewables like solar falling, it makes sense for the co-op to develop the resources in its own backyard. “We’ve been trying to negotiate with Tri-State on this without success,” Patterson said.

So last year, DMEA went to the Federal Energy Regulatory Commission, or FERC, to ask if they could buy more than 5 percent of their power from local sources — despite their contract. FERC said they could. In fact, a federal law called the Public Utilities Regulatory Policies Act of 1978 required it to. The law, passed during the 1970s energy crisis, was intended to promote small-scale renewable energy development.

Tri-State wasn’t happy, and went back to FERC. It wants to recoup costs by charging co-ops like DMEA for buying more local power. In June, FERC rejected the request. Tri-State is appealing, with support from a number of the other co-ops it serves, which worry about rising costs. And because many wholesalers like Tri-State have similar contracts with rural co-ops, Boughey said the outcome could affect rural utilities nationwide: “What’s happening in Colorado could play out across the country with other cooperatives.”

The ruling could effectively lift local generation caps for rural co-ops, explained Kevin Brehm, with the Rocky Mountain Institute. He estimates that if the nation’s rural co-ops were to transition completely to renewable energy, it would create a 200 gigawatt market — the equivalent of at least 100 Hoover Dams.

That’s all theoretical, of course. Still, some locals are nearly giddy at the prospect of independence. “I felt as if I were six years old and I just got a pony,” said former DMEA board member Ed Marston, of his reaction to FERC’s decision.

Marston is an advocate for renewable energy, and for local economic development. He lives in Delta County, where coal mines have long provided the best paying jobs. But two of three mines closed recently. “We’ve lost tens of millions of dollars in public tax revenue,” he says.

A smattering of small-scale power plants could help rebuild the tax base. But they’re only a piece of the economic puzzle. They won’t bring back the 700-plus jobs lost from the mines. Take the modern hydro plants on the South Canal: They’re affordable, efficient — and automated.