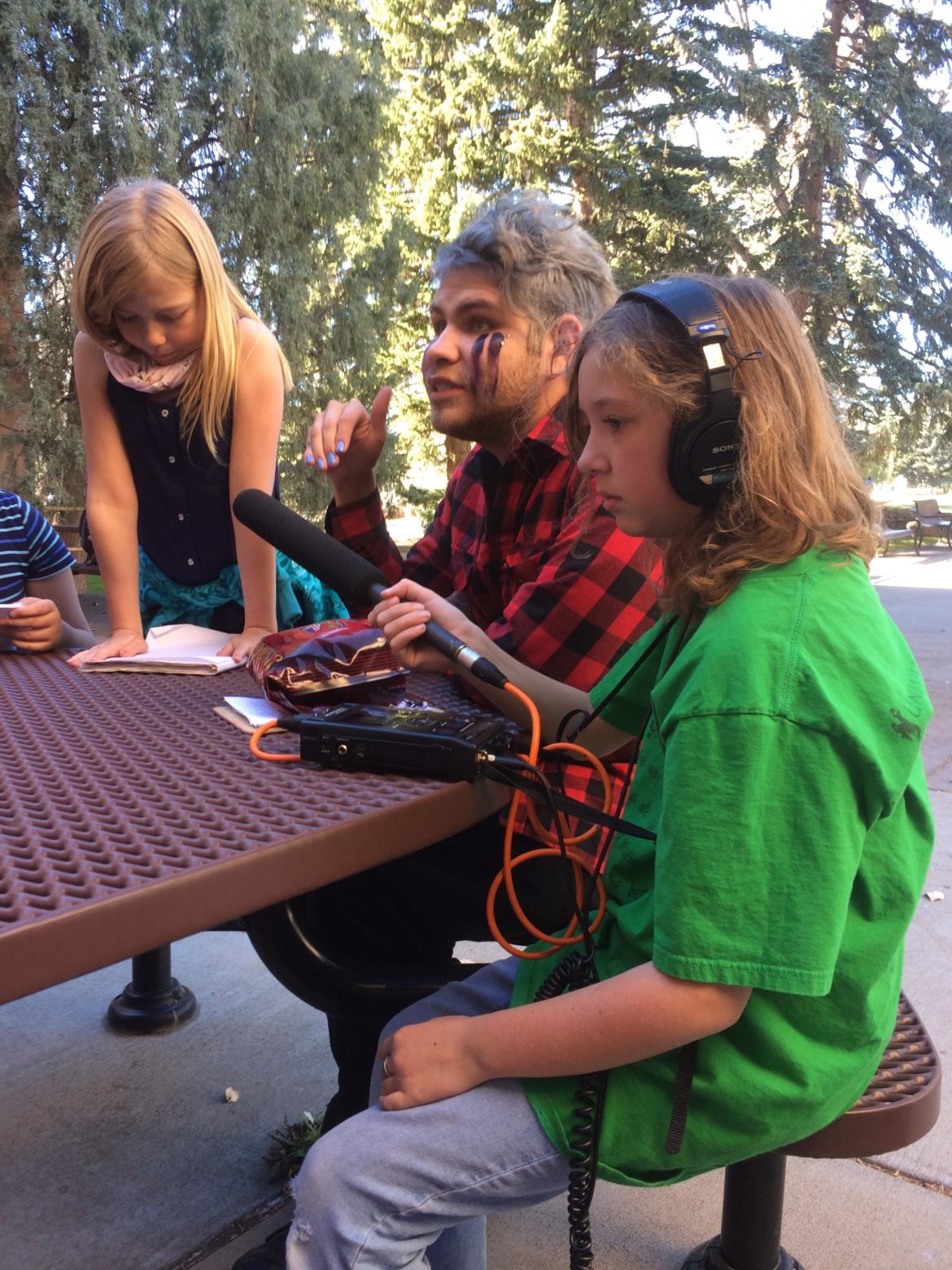 Wyoming’s new Science Standards for schools are encouraging kids to make up their own minds about climate change. Recently, a group of Laramie middle schoolers tackled the issue of the environmental impacts of energy development in Wyoming.

To understand how energy works, we built some wooden cars and put tiny solar panels on them to power their gears. And then we tried racing them.

“One of the cars looks like it’s having trouble,” our friend, Zane Rothfuss, was the race’s sportscaster. “One of the engines isn’t working. Oh, Anna’s started going again…”

We built these solar cars because we’re learning about all different kinds of energy: coal, wind, solar, coalbed methane. Our teacher Mr. Pannell told us Wyoming produces all those kinds of energy and he asked us this question.

So we started talking about the answer.

There was a rally going on outside our school on the campus of the University of Wyoming that had to do with fossil fuels. So we went to it and met a Northern Arapaho activist from Wyoming named Micah Lott who’s been protesting the Dakota Access Pipeline. Lott said if that pipeline breaks, it could contaminate Wyoming rivers too.

“Water is precious. And we’re nothing without water to live. Can we all agree on that?”

“If you say today that your water is gross, you know, you turn on the faucet and it started coming out yellow and black, wouldn’t you want to do something about it?”

“Well, why don’t we do something about it before it happens than when it already happened?” asked Lott.

After the rally we thought, “screw oil, screw fossil fuels, it’s ruining our water and our air.”

Well, then we interviewed John Pope. His daughter goes to our school and he owns Well Dog, an energy service company. Pope agreed that bad technology like broken pipelines hurts the environment and that’s why his company working to invent better technology. Pope said this is really important because nations with more access to energy have less war, less abuse, less slavery. This is the kind of graph Well Dog’s John Pope drew on the board for us. It shows how countries with more energy tend to have greater access to human potential and that’s why we need to help other countries have better access to energy.

“Places that have more energy do those things in a more enlightened way, no doubt about it,” said Pope. “So that makes you want to create energy availability. The problem you have is that energy availability also creates environmental destruction.”

So after talking with Pope, we interviewed a lot of experts and did other research. For instance, we used the NASA website to tracked the rate at which the planet is warming. And we started to realize that Wyoming’s energy economy, it’s a little bit sweet, a little bit sour.

It’s kind of like those solar cars we built. It’s cool that they run on sunlight that doesn’t hurt the environment, but they don’t work that well. We came up with lots of ideas of how to make the cars better and how turn them into real cars.

“I think it would be cool to put solar panels on, like, the top of your garage and then make like a generator in your garage,” said Tommy Brown. “And then, like, plug it into your car. And then, like, you can just make your own energy and have an electric car so two bonuses.”

“But what if you don’t have sun that day?” asked Anna Chen.

“Yeah, and you can’t drive at night,” said Zane Rothfuss.

“Use a bicycle!” Tommy said in a goofy voice and everyone laughed.

But as you can hear, there’s a lot of disagreement among us. We didn’t agree on Wyoming’s priorities either.

“You should make it the number one priority to be helping the planet, not getting money, which is actually counterproductive,” said Edin McBride.

“[But] we are able to go to school right now because of the money that our economy is making, and we need money to help the environment,” said Anna Roesler.

“Coal is going to go away someday,” said Rowan Ahern. “It is not a renewable resource and we have to learn, the Wyoming government needs to learn, to cope with that. And they need to find alternative sources of energy, like solar power and wind energy.

But here’s something we did agree on: that Wyoming kids benefit greatly from all the money that comes from the energy industry, like the brand new $80 million Laramie high school thatcoal bonuses helped pay for. In a couple years, we’ll be driving our own cars to that school.

So, yes, our heart is proud of where we come from and who we are…. It’s just that, as we start getting a taste of our future, we can’t tell if it’s sweet or sour.