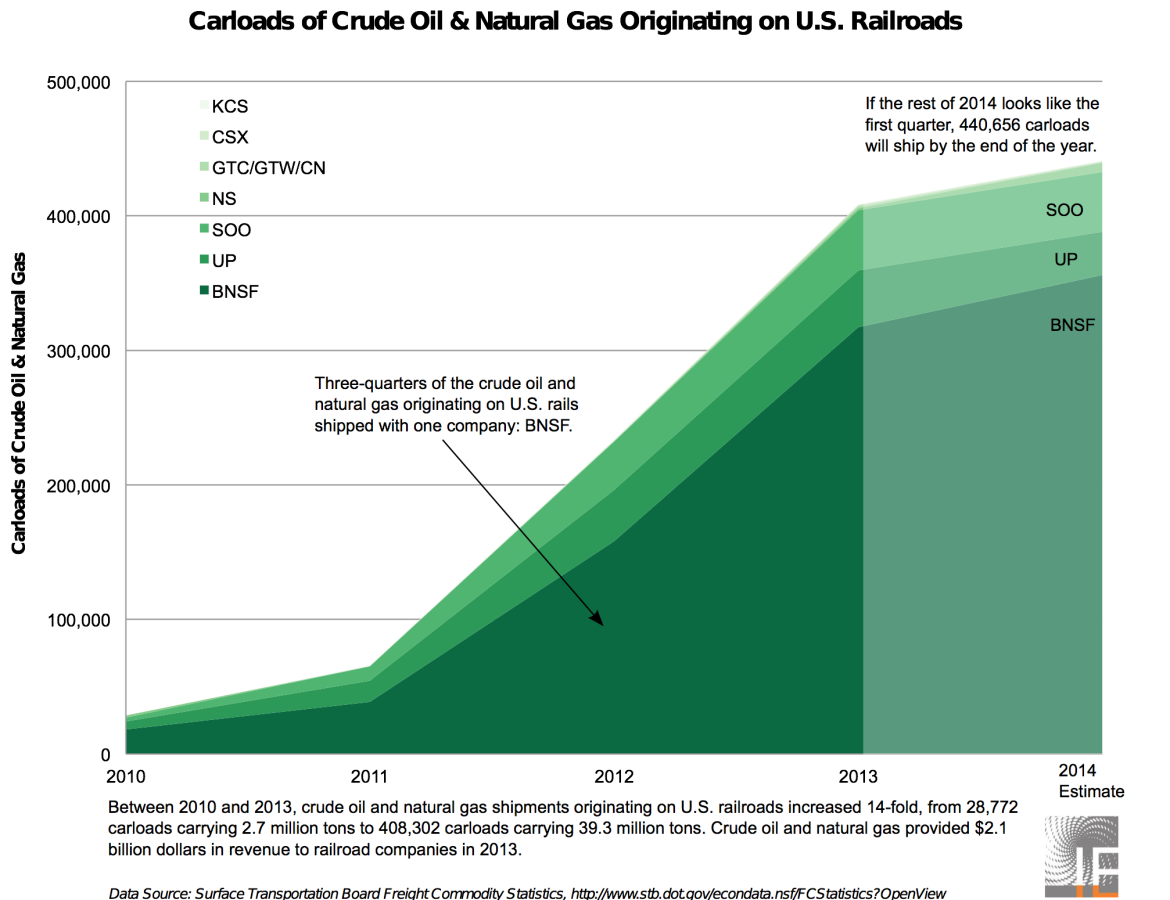 In the wake of a series of deadly spills, the safety of crude oil traveling on railroads has become a national question. A new federal rule requiring railroad companies to notify state officials where Bakken oil is moving went into effect last week (although railroad companies are doing all they can to keep routes secret).

Yet the most basic questions about crude-by-rail – how much oil is moving on railroads and where exactly is it going – have proven difficult to answer.

How much crude oil is moving on U.S. railroads?

It depends on who you ask and how you ask.

According to data from the Surface Transportation Board (STB), 408,302 carloads of oil and natural gas carrying 39.3 million tons originated on the largest (class 1) U.S. freight railroads in 2013. That’s a 75 percent increase from the previous year, and a 14-fold increase from 2010, when just 28,772 carloads of oil and gas originated on U.S. railroads. But the STB is just one source of rail freight data. Many news reports cite numbers from the American Association of Railroads (AAR), which publishes weekly summaries of rail freight traffic. According to AAR data, 407,642 carloads of crude oil originated on U.S. railroads, up from 233,819 in 2012.

What do the STB numbers tell us that the AAR numbers don’t?

And it’s not because most freight travels on BNSF in general. Based on STB data, in the first quarter of 2014, only a third of all freight carloads originated on BNSF railroads.

But BNSF is the dominant player in crude and natural gas by rail. In 2013, four out of five carloads of crude oil and natural gas originated on a BNSF railroad. And BNSF’s slice of the oil and gas by rail pie has been growing over the past five years.

What is this “originating on U.S. railroads” business?

Railroad shipments often travel on more than one company’s track. A carload of Bakken oil from North Dakota might start out on a BNSF railroad track, then transfer to a Union Pacific track before arriving at the next stage of its journey (a pipeline, ship or refinery). When each railroad company reports what travels over its tracks, it distinguishes between shipments that originated on its tracks and shipments that transferred from another railroad.

Because transfers could travel on multiple railroads, the only way to make sure we aren’t double counting shipments is to only look at originating rail cars.

Why are the AAR numbers and the STB numbers different?

The crude-by-rail numbers from AAR and STB vary slightly (they differ by less than one percent), but they tell the same story: by pretty much every metric (tons, carloads, percent of all freight), oil is rapidly expanding on U.S. railroads.

Here are some reasons for the differences:

Where do these numbers come from?

These numbers are coming from the railroad companies to the STB and AAR:

What don’t the AAR and STB numbers tell us?

In reports to AAR and STB, railroad companies provide information at the national level. We still can’t tell, from this data, which states and municipalities oil and gas is traveling through by rail.

This data is tricky, and for good reason: It’s data about a complex, multipart system. The Inside Energy team is investigating important data and policy questions about crude-by-rail to figure out how this issue affects you.