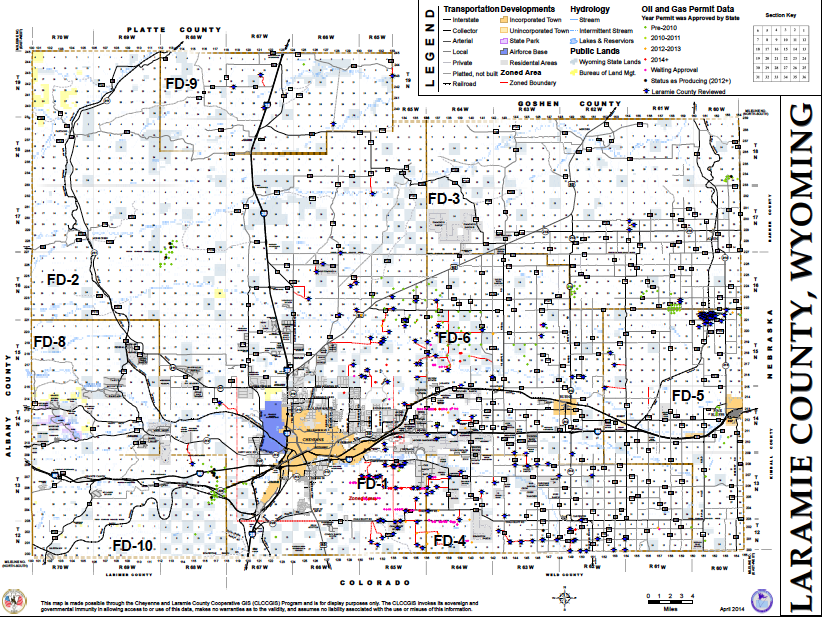 Oil and gas booms can seem remote — it’s not like they happen in your backyard.

Take Laramie County, Wyo., where a surge in well permitting threatens to bring drilling closer to a large number of homes. Although Wyoming has a long history with oil and gas, it’s almost always been in rural areas. A boom in Laramie County would change that, though, and some say the state is ill-prepared to deal with the issues that arise when communities bump up against drilling.

Oil and Gas Supervisor Mark Watson says the sudden flurry of activity can be attributed to a deep sandstone formation called the Codell. Watson says it’s not yet a boom, but that it could be.

“You know, the companies that are down there are serious about eventually drilling those wells. They just need to learn more about the formation,” he said.

Bloomberg News recently reported that even companies that are traditionally conservative in their assessments are saying the Rocky Mountain region has as much potential for oil and gas as the better-known Bakken in North Dakota or Eagle Ford in Texas. In Laramie County, those promising reserves happen to overlap with places where lots of people live.

“That’s getting to be a big issue. Colorado is already dealing with it, and now it’s probably going to be an issue in Laramie County because they’re drilling close to people’s houses,” Watson said.

Deb Schauermann moved to Cheyenne last May with her two horses. She put in a barn and built new fences, and then a few weeks ago, workers started staking out the adjacent property. She found out that the oil company EOG Resources has plans to drill as many as 32 horizontal wells. The closest well pad would be several hundred feet behind her house. Schauermann worries about the unknown consequences: “The health impacts, all the flaring and all the chemicals that are going to go in,” she says.

Hoping to get reassurance about some of those concerns, Schauermann was one of two dozen landowners who attended a meeting in Cheyenne recently about preparing for oil and gas development. She got lots of advice from other attendees.

“Being vigilant, taking pictures, calling people. I mean, I didn’t know that you should probably do all that stuff, so this has been very, very helpful, because I was feeling pretty helpless.”

Schauermann doesn’t own the mineral rights beneath her property, so she won’t profit at all from the new development. Jan Beeken, on the hand, does own the minerals on her property outside Cheyenne, and is planning to lease them to an oil and gas company. But she thinks the state needs stronger regulations, and enforcement of them.

“You know, I understand the need for drilling and oil and gas in Wyoming,” Beeken says. “It supports the economic base for the state. There just need to be controls in to protect the workers, to protect the people and to do it right.

Wyoming’s rules for how far a well has to be from a house — the setback — haven’t been updated since the 1970s. While in many places in Texas, the setback is 1000 feet and in Colorado, it’s 500 feet, in Wyoming, it’s just 350 feet. The state’s regulations governing the flaring or burning of natural gas from oil wells also haven’t been overhauled in decades. The Oil and Gas Conservation Commission plans to review the setback rule this year, but in the meantime some are calling for a moratorium on drilling in Laramie County.

“The state has got to get out in front of the development to address the impacts that are going to occur to people, to property and local governments, and right now, we’re not there,” says Jill Morrison, with the Powder River Basin Resource Council.

It’s not immediately clear who would have the authority to impose a moratorium though. James Kaste, the deputy attorney general for natural resources, says he’s never been asked the question before. Watson, the oil and gas supervisor, says he defintiely doesn’t have the authority.

“You know, people think that we can just stop them,” Watson says. “If a company comes in with a drilling permit and they meet all the requirements of our current rules, I have to, by statute, approve that drilling permit. I can’t just say no.”

Watson is negotiating with companies though. For example, he says just recently, he asked a company in Laramie County to move their wells further back from a house and put up better noise barriers. It may have been a first — historically oil and gas supervisors haven’t exercised their negotiating authority — but it’s not likely to be last.

Inside Energy is a public media collaboration, based in Colorado, Wyoming and North Dakota, focusing on the energy industry and its impacts.