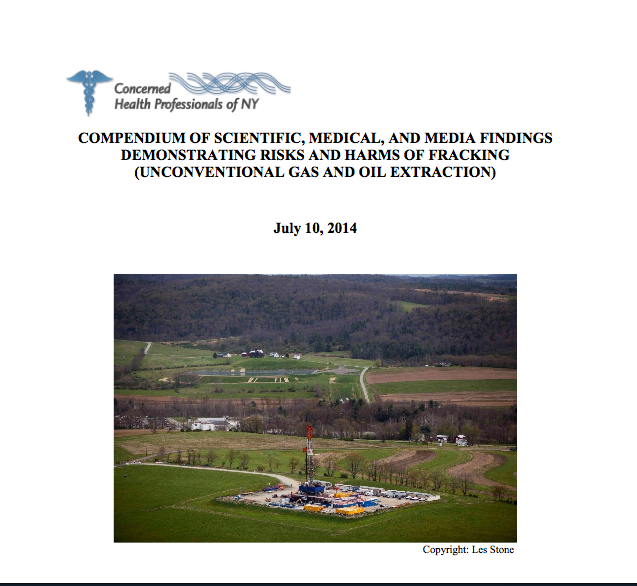 Communities surrounded by the shale oil boom across the nation have grown increasingly concerned about the environmental and health impacts of large-scale hydraulic fracturing, or fracking.  It is a polarized debate, with not enough science to back up either anti-fracking concerns, or pro-industry claims.  Essentially the drilling has come quickly and overwhelmingly before the science.

Now, health experts and scientific researchers with a group called Concerned Health Professionals of New York have released a “Compendium” of the what they claim are the significant risks and harms of widespread hydraulic fracturing. The report is essentially a compilation of scientific studies, media reports, and medical studies to date, all of which point to the need for more study and transparency in the industry.

According to it’s website, the group was formed to “amplify the voices” of health professionals in New York calling on Governor Andrew Cuomo to conduct a health impact study of fracking.  The group includes medical doctors and nurses, environmental scientists and veterinarians.  Their purpose is to “ensure that careful consideration of the science and health impacts are at the forefront of the fracking debate.”

In June the state’s General Assembly passed a three-year moratorium on oil and gas drilling permits.  Full passage now depends on the State Senate and on the Governor.

The compilation of studies released today was sent to Governor Cuomo as well as to the heads of the Department of Environmental Conservation and the Acting Department of Health Commissioner.   The intent is clear:  convince the Governor, who is running for re-election in November, to uphold the moratorium on fracking and to pursue thorough health and scientific studies of the impact of large-scale oil and gas drilling.

The introduction to the compendium states that science has clearly demonstrated many adverse impacts of fracking:

A growing body of peer-reviewed studies, accident reports, and investigative articles is now confirming specific, quantifiable evidence of harm and has revealed fundamental problems with the drilling and fracking. Industry studies as well as independent analyses indicate inherent engineering problems including well casing and cement impairments that cannot be prevented.

Ultimately it is your Department that carries the responsibility for making a scientifically informed recommendation that ensures protection of public health and safety. Based on the knowledge available to us now, we believe that fracking would pose significant threats to the air, water, health and safety of New Yorkers and that your recommendation must also be for a statewide moratorium of at least three to five years.

The authors are clearly convinced that the risks of fracking outweigh its significant economic and national security benefits:

The public health risks from unconventional gas and oil extraction are real, the range of adverse impacts significant, and the negative economic consequences considerable. Our examination of the peer-reviewed medical and public health literature uncovered no evidence that fracking can be practiced in a manner that does not threaten human health.

The report certainly adds weight to the argument that fracking is moving too quickly, but does not do a great deal to end the increasingly polarized debate over the costs and benefits of the shale gas boom.