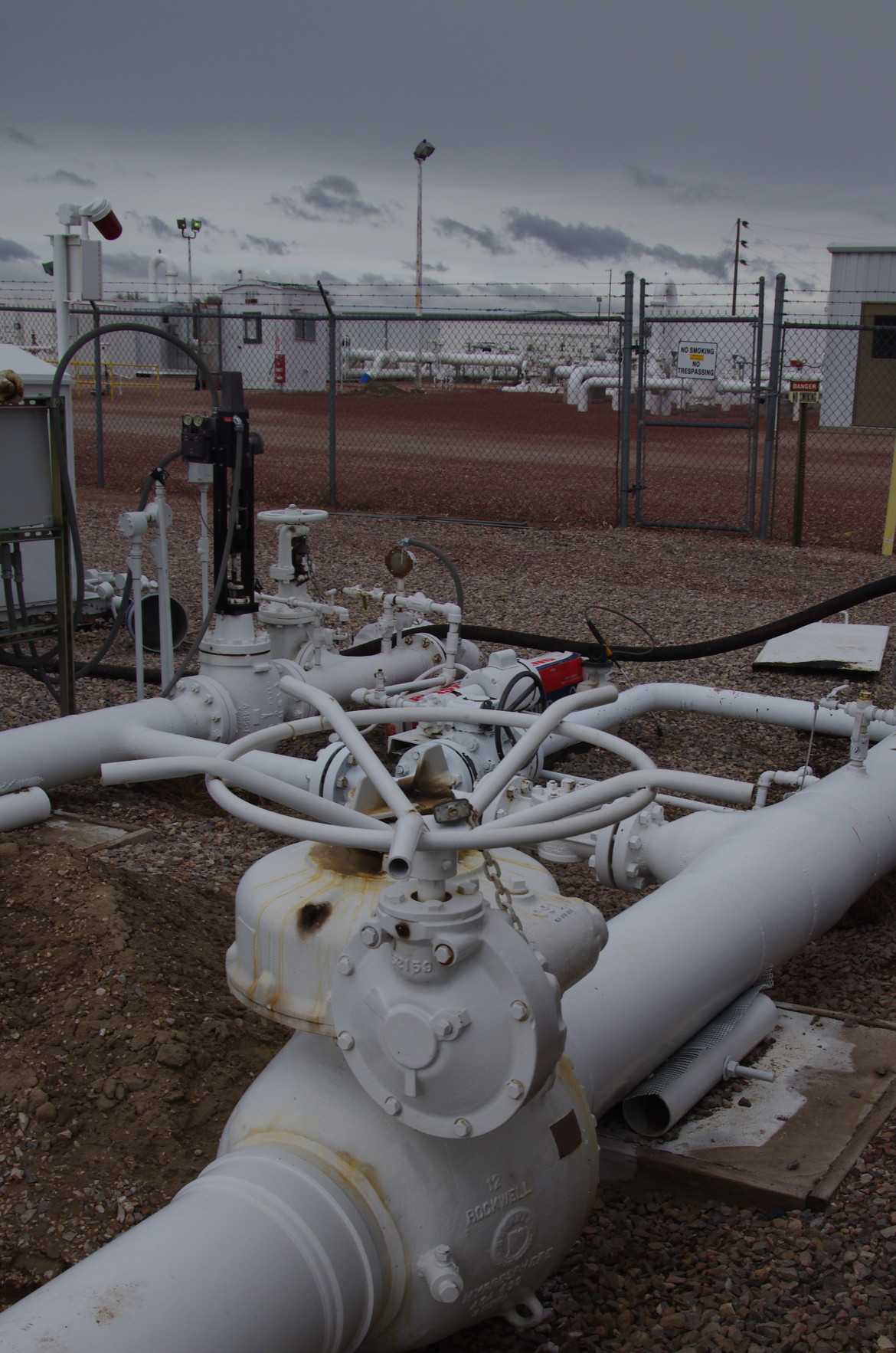 A "pig launcher" at the Eighty-Eight Oil tank farm in Guernsey, Wyoming.

But pigs aren’t just excellent plot devices — they also have practical applications. They’re used for cleaning pipelines, pipelines that carry natural gas, crude oil, waste water from energy producing areas to the places where that energy is used.  Perhaps more importantly, they are used to inspect the millions of miles of pipeline that crisscross the country for corrosion and other problems.That’s what engineer Sean King was using a pig for on a blustery March morning at the True Company tank farm just outside of Guernsey, Wyoming. A \”pig launcher\” at the Eighty-Eight Oil tank farm in Guernsey, Wyoming.

By the time I arrived, the long, snaking metal instrument, equipped with a host of precision sensors for detecting things like dents and corrosion, was already in the pipeline. The only visible part was the very tail end, sticking out of the ‘pig launcher’ — an aboveground entrance to the pipeline. As we stood around in the cold, waiting for the pipeline to re-pressurize, King explained that pigs are so named because the early ones “were basically a tube that had wire wrapped around them, and when they went through the pipe, it sounded like a pig squealing.”  The project for the day was to pig a 12-mile section of the Belle Fourche pipeline, between Guernsey and Ft. Laramie. Although there was nothing obviously wrong with the 40-something-year-old pipeline, but King explained it was due for its federally mandated 5-year check-up.“We have the National Historic Site with Ft. Laramie and we have the river in Ft. Laramie, so you can only imagine what would happen if there was a problem,” he trailed off. Of the country’s 2.6 million of pipelines, only those in areas deemed ‘high consequence,’ get pigged on a regular basis. That ends up being less than half of hazardous liquids pipelines and less than ten percent of natural gas lines. But Carl Weimer, with the Pipeline Safety Trust, an industry watchdog group, says pigging lines is only helpful to a point.“It’s a pretty good technology, but it’s very dependent on the company using it correctly,” he said. And pipeline companies have a lot of latitude in how they use pigs. The federal agency which regulates pipeline safety, the Pipeline and Hazardous Materials Safety Administration, declined repeated interview requests for this story. But as Weimer explains, the agency mostly leaves things up to the companies.“The [companies] do the inspections, they run the gadgets through the pipelines that find problems,” he said. “And then the federal inspectors will go into their office and inspect that paperwork to see if they’ve followed their own plans for keeping things safe.”Inspectors also review the pigging data and occasionally do site visits. But with 2.6 million miles of pipelines in the ground and a combined total of just about 500 state and federal inspectors, safety advocates like Weimer worry problems might be slipping through the cracks — especially as companies race to build new pipelines to build new pipelines to handle booming domestic oil production. One pipeline executive at a recent industry conference pointed out that producers have their foot on the gas pedal, and are counting on “midstream” companies to lay the track in front of the train. It’s that kind of metaphor that Weimer worries about.“The federal inspectors went out a few years ago, when the boom started, and did some some on-the-ground inspections,” Weimer said. “And they were kind of aghast at what they found going into the ground.”They found shoddy welding, poor quality pipe and inadequate coating, to name a few things. Those are problems that Sean King, the engineer, is hoping not to find on the decades-old Belle Fourche pipeline. But the pig probably will find some corrosion or other problems in the millions of data points it collects, and those problems will need to be acted on. King says they’ll probably end up digging up and repairing half a dozen sections of pipeline based on the testing, but he acknowledges there are limitations to any test. And what happens when those problems aren’t found?  “I don’t think there’s ever been a pipeline company out there that’s never dropped a drop of oil on the ground, it’s kind of inevitable,” he said.With half a million miles of new pipeline planned for the next two decades, those spills are only likely to increase.