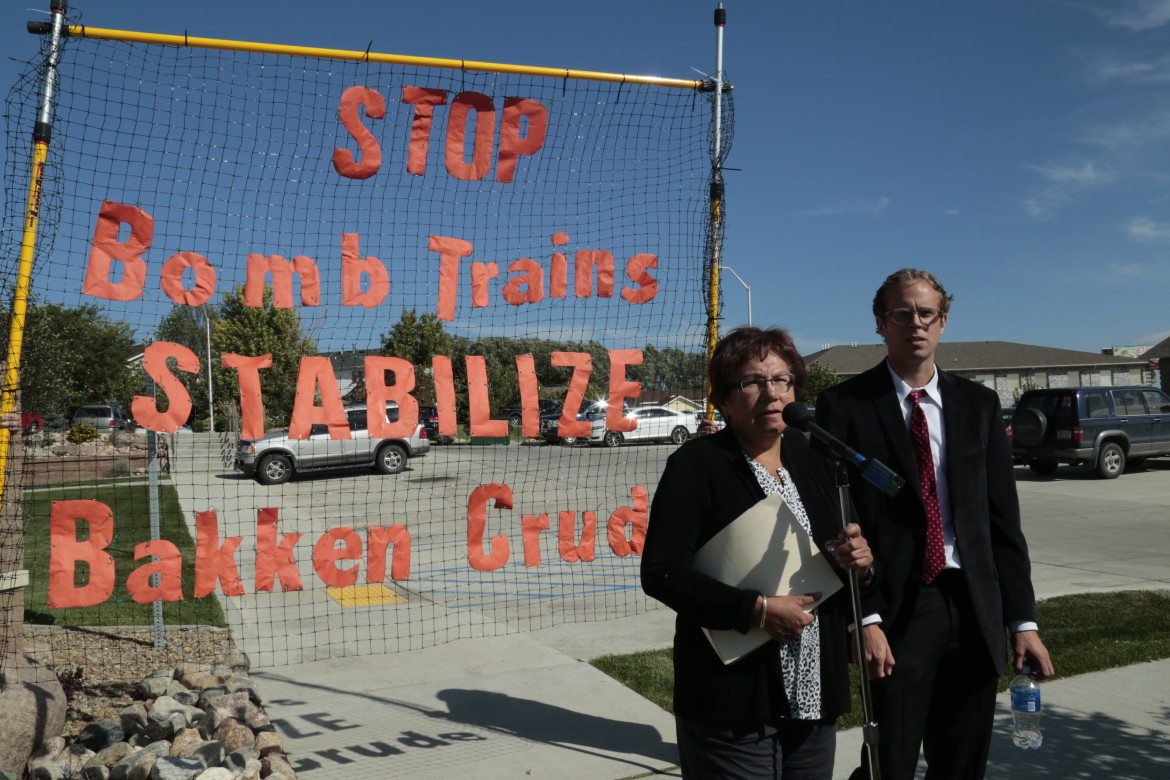 Activists from Dakota Resource Council protest outside the public hearing on oil by rail in Bismarck, ND, on Tuesday Sept. 23. Theodora Bird Bear and Scott Skokos of Dakota Resource Council protest outside the public hearing on oil by rail safety in Bismarck on Tuesday Sept. 23.

Oil from North Dakota has been the fiery cargo in a number of deadly train crashes in the past year and a half, including one that killed 47 people in Quebec last July. Now, state regulators are considering new rules that would make oil safer to ship by rail.

On Tuesday, the North Dakota Department of Mineral Resources held a public hearing on the proposed regulations. The room was packed with men in suits and cowboy boots from places like Houston and Oklahoma City. They had a strong message for the state: no new regulations.

Keith Lilie is with the Norwegian oil giant Statoil, but his comments were nearly identical to every oil executive who testified:

“The current conditioning of crude oil is sufficient for safely transporting Bakken crude oil by truck, rail or pipeline,” he said.

Conditioning is the processes of heating the oil at the well pad to remove some of the most flammable natural gas liquids, like propane and ethane. State regulators don’t currently require conditioning or stabilization, a similar process, before loading the oil onto rail cars.

Other industry representatives told the state that regulating the composition of the oil is the wrong approach. Kari Cutting of the North Dakota Petroleum Council said human error and track maintenance were to blame in several of the recent train crashes.

“The material contained in these railcars was not the root cause of these accidents,” she said.

In the nearly six hours of testimony, very few people spoke in favor of more regulations. Theodora Bird Bear, with the environmental group Dakota Resource Council, was one of them. She reminded state officials that the whole country is watching to see what they decide.

“You have a responsibility to fulfill this commitment to protect public safety and that’s what we expect,” she said. “After all, your decisions are not going to only affect Western North Dakota.”

A lack of pipelines means 60 percent of the oil extracted here leaves North Dakota on a train. According to the Department of Mineral Resources, no other states require stabilization before the oil is loaded onto rail cars.  North Dakota officials will decide on whether or not to impose new rail safety rules in the next few months.