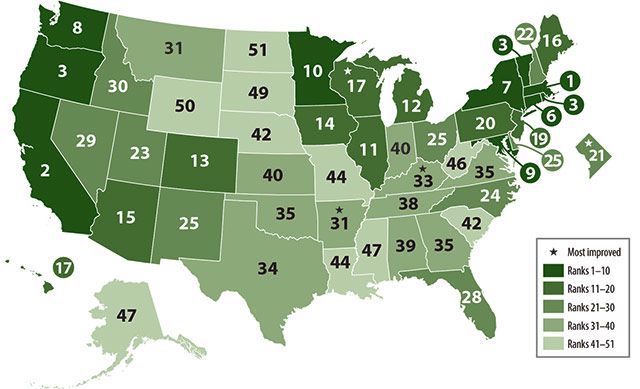 The results are in for this year’s state-by-state energy efficiency ranking, and some of Inside Energy’s focus states are at the bottom of the list. The American Council for an Energy-Efficient Economy released its State Energy Efficiency Scorecard last week, grading states for their policies and efforts toward energy efficiency.

ACEEE grades each state’s energy efficiency based on six criteria, including utilities, transportation, building energy codes and state government-led initiatives. Points are awarded for the state’s efforts and progress in each category, for a total of 50 possible points. At the top of the list, for the fourth year in a row, is Massachusetts. But where did Colorado, North Dakota and Wyoming rank?

Colorado did well, moving up three points from last year to occupy slot #13. The state scored points for its Energy Efficiency Resource Standard, which requires utilities to offer financial rewards to customers who suck less energy from the grid—either by changing their usage behavior, or investing in more efficient appliances and gadgets. Colorado also earned points for supporting efficient transportation, offering mortgage discounts and loans for efficient homes and businesses, and efficient energy use in government buildings.

Wyoming is near the bottom at #50, the same spot it held last year. The state earned a couple of points for utility policies and programs, but energy savings were low compared to the national average. Its Statewide Freight Plan, an initiative to improve the state’s transportation policy, earned Wyoming some points, but the state doesn’t currently have any policies that encourage efficient transportation systems. The state also earned a few points in building energy codes and state government-led initiatives.

At the bottom of the list is North Dakota at #51. The state earned zero points in the utilities category, with no reported spending on energy efficiency programs. It earned points in transportation for its State Freight Plan’s effort to create a “safe, secure, sustainable, efficient, reliable and responsive” transportation system. North Dakota scored half a point in government-led initiatives for its one grant program available for energy efficiency investments.