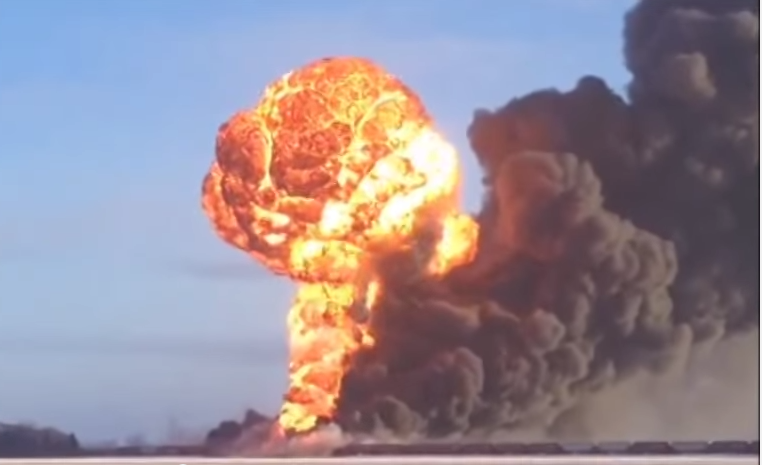 It was just after 2 p.m. on this day last year when two trains collided in a cornfield near Casselton, a farm town of 2500 just outside of Fargo. One train was carrying soybeans. The other, crude oil from North Dakota’s Bakken oil fields.

Former Mayor Ed McConnell heard the explosion while coming into town to get the mail. Sheriff Paul D. Laney was speeding towards Casselton when he saw a massive fireball, “and we were still 12 miles away.” Fire Chief Tim McClean was watching from a across the field, having determined the fire was unfightable. He remembers the sound the cars made before they exploded. “It was just an eerie sound, like the cars were taking their last gasp of air.”

Amazingly, no one was hurt. But the crash came on the heels of a deadly derailment in Quebec that killed 47 people, and was a wake up call for trackside communities across the country.

In the year since, the US Department of Transportation has begun drafting new regulations to make it safer to ship oil. Railroads have agreed to slow down trains. Oil companies say they’ll begin to phase out old tanker cars. Perhaps the most significant step came earlier this month, when the state of North Dakota passed rules to make the oil less flammable before it’s loaded onto trains.

Does any of this make anyone in Casselton feel safer?

Not really, said McConnell. “I don’t know what they’re going to have to do to make me feel safer,” he said. “Every time I see an oil train, I always wonder.”

In his ideal world, pipelines would replace trains. But he knows that’s not going to happen anytime soon. And in the meantime, he still worries — unlike a lot of other people in Casselton.

Jessica Forderer works at Hardwear Hank — less than 100 feet from the train tracks. Up to 40 oil trains pass through here each week headed for refineries on the east and gulf coasts. The train derailment didn’t faze her, even though she sought professional help for her young daughter, who was traumatized by the crash.

“The railroad was here first,” she said. “The town was built around the railroad. So for us to say that they shouldn’t be coming through here isn’t feasible either.”

Nationwide, oil train traffic has increased nearly fiftyfold since 2009. And that’s likely to continue, because many of the east coast refineries that want Bakken oil can’t get it by pipeline.

Many people in Casselton are tired of the media attention the train crash has brought. McConnell is concerned that people might think twice about moving here. “It always was a worry of mine that we would become the poster child for railroad oil explosions, and there’s so much more to Casselton than that,” he said.

What Casselton should be known for, he said, are it’s good schools and fertile soil. He’s confident that the risk posed by oil trains will be reduced and Casselton will once again be known as safe, not just unscathed.