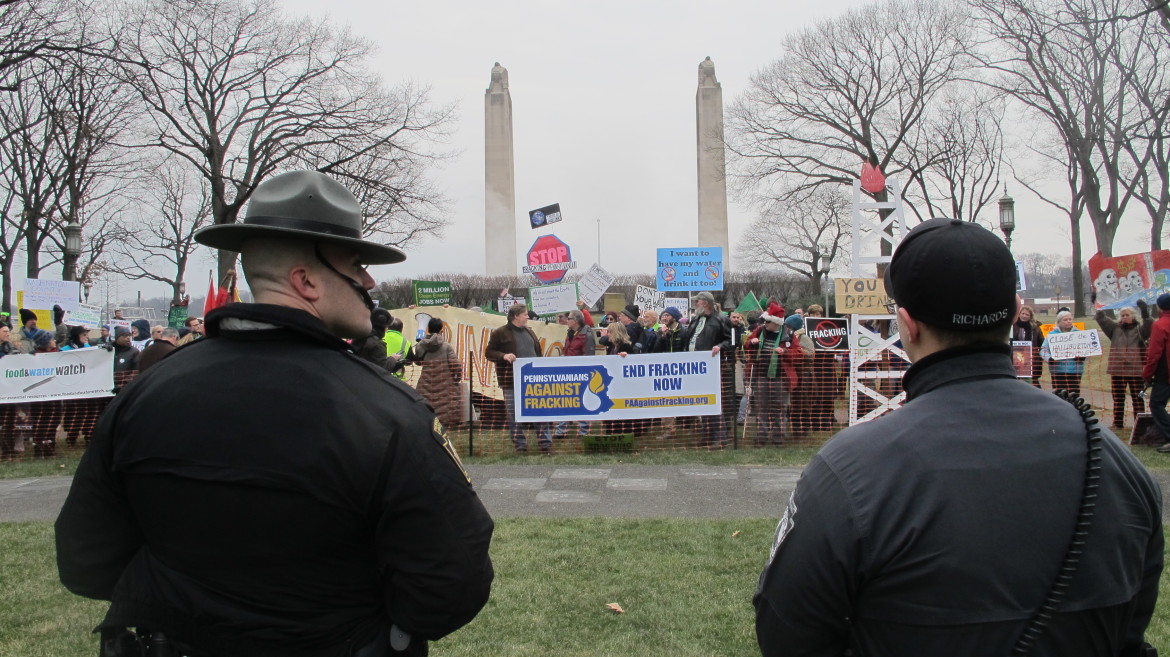 The fracking boom has generated controversy across the country. In Pennsylvania, there have been reports of pipe bombs, charred debris, and gunshots fired at gas sites.

Most of the opposition is non-violent. Still, law enforcement agencies have started to work closely with the oil and gas industry to monitor threats to infrastructure and, at times, to keep an eye on activists. That’s according to documents obtained through an open records request by the public media collaboration StateImpact Pennsylvania. It’s a partnership happening in drilling hot spots around the country—places like Pennsylvania, Texas and the Rockies.

In Colorado, Cliff Willmeng believes he has seen this kind of thing first hand. He is a nurse and a well-known anti-fracking activist who lives near Boulder.

Two summers ago he found himself under arrest… pinned down onto his driveway by a pair of police officers. “They were yelling ‘stop resisting’, ” he recalled, “and my wife was watching this entire time screaming.”

So, why was this happening?

According to the local police report, there was a night when Willmeng drove up to a security guard at a gas drilling site. He was there for about 60 seconds and never got out of his car. But after he left, the guard called the police and said he felt threatened and harassed.

So, multiple officers from two different police departments showed up at Willmeng’s home. They claimed he was uncooperative and charged him with four misdemeanors. Willmeng detailed the charges: “One of them being harassment, another being criminal trespassing, another one being obstruction, and another one resisting arrest.”

Activists in other parts of the country have also felt targeted. Wendy Lee is a college professor and a vocal fracking opponent in Pennsylvania. Last year a state trooper came to her house to ask her about a trip she had made to a gas compressor station. She was joined by two other activists at the time. It wasn’t long before security guards told them all to leave.

“And when they tell us to leave, we left,” Lee said. “There was no altercation. There was nothing.”

Standing inside her front door, the trooper brought up the term “eco-terrorism.” Lee was stunned when he asked her if she knew anything about pipe bombs, “Part of me was like, ‘Oh this is scary. This is actually scary.’ And part of me is just laughing on the inside because it’s ludicrous.” Lee was never charged with anything.

That same Pennsylvania trooper – Mike Hutson – also traveled all the way to upstate New York to investigate the other activist present at the compressor incident.

An open records request with the Pennsylvania State Police shows that this trooper is part of a broad intelligence-sharing network between law enforcement and the gas industry — called the Marcellus Shale Operators’ Crime Committee. The group swaps information about activists, protests and other potential threats to gas drilling sites.

Similar partnerships have cropped up elsewhere — in Texas and in the Rockies. An email obtained by Stateline PA described the make-up of the Marcellus group: “approximately twenty-five individuals representing companies such as Chesapeake, XTO, EXCO, Shell, Talisman, Chief, Range Resources and Anadarko, to name a few.”  The email also explained, “Many of us are also involved in similar groups in the Rockies, South Texas, and East Texas. Our groups in those areas work very closely with the FBI Task forces dedicated to oil field crime.”

A spokesman for Pennsylvania’s main gas industry trade group, The Marcellus Shale Coalition, declined to comment on tape for this story, but in an email said, safety is the industry’s top priority.

Meanwhile, the FBI and the Pennsylvania State Police both say that they are not members of the Marcellus Operators’ Committee, but acknowledge they receive updates from it and have attended meetings.

J.J. Klaver is a special agent with the FBI in Philadelphia and admitted part of its job is monitoring threats to critical energy infrastructure. He said, “The FBI is not in the business of investigating or tracking groups for having specific beliefs.”

But that does not convince Witold Walczack, the legal director for the American Civil Liberties Union of Pennsylvania, that the Crime Committee is harmless. “Energy companies have a history of suppressing dissent in this country,” he said, “Whether it’s coal, or oil, or now natural gas.”

Walczack has represented fracking opponents as clients. He said a small percentage of activists have resorted to crime but, “the vast majority of people who are involved today in the anti-fracking movement are law-abiding citizens.”

After her visit from the Pennsylvania state trooper, college professor Wendy Lee filed an open records request with the state police, trying to find out why she was questioned. Months later, her request was denied. Among other reasons, the police said the records were part of an ongoing criminal investigation. That response did not satisfy Lee: “While we get to continue to believe we have the free exercise of our First Amendment rights, we’re not actually supposed to use them.”

Lee still hopes to get the police records and is appealing the decision.

This story comes to us from StateImpact Pennsylvania, a public media collaboration reporting on Pennsylvania’s energy economy.