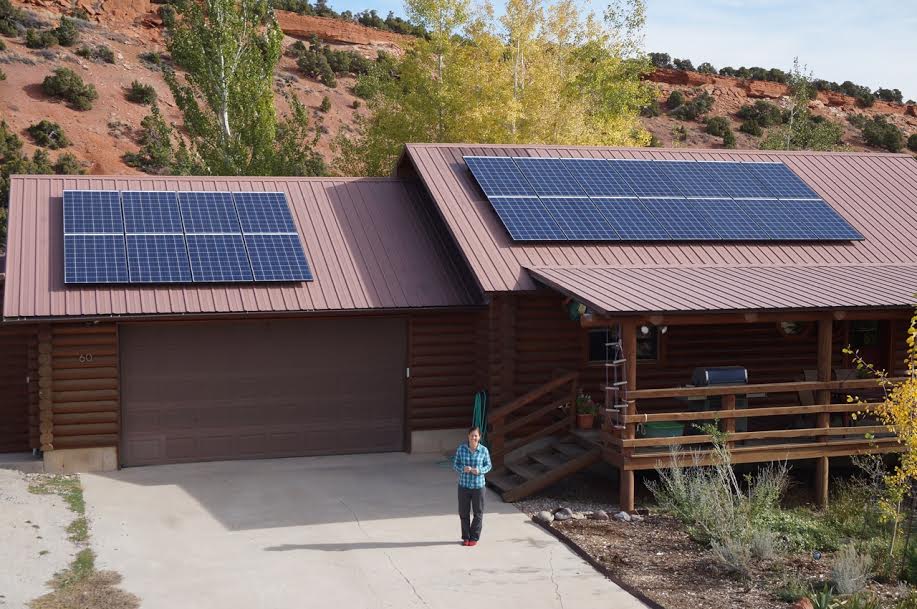 Holly Copeland in front of the family's house and their newly-installed solar array. Holly Copeland in front of the family’s house and their newly-installed solar array.

With its big blue skies and high altitude, Wyoming’s solar potential is among the best in the nation. But even as residential rooftop solar has boomed recently in places like California, Colorado and New Jersey, it’s barely made any inroads in the state. Economics and politics both play a role, but with the price of photovoltaics continuing to drop, some people are starting to ask whether momentum is building for solar in nation’s largest coal-producing state.

“We have an amazing solar resource,” said Milton Geiger, the energy extension coordinator at the University of Wyoming. “Riverton has a better solar resource than Miami.”

Even so, fewer than 1 in 1000 Wyoming households have rooftop solar installations, compared to 1 in 100 in Colorado. Geiger says the biggest reason has to do with how Wyoming currently get its electricity.

“[Solar is] trying to replace something that’s relatively inexpensive,” Geiger said, referring to coal, which accounts for around 90 percent of the state’s power.

Although electricity rates have been climbing steadily in Wyoming in recent years, the state still has some of the cheapest residential power in the country—on average 10 cents a kilowatt hour, compared to 17 cents a kilowatt hour in California. The state has no renewable energy mandate and solar gets only one, cursory mention in the Governor’s 64-page energy strategy. But as the price of solar keeps falling—between 2012 and 2013 alone, prices dropped almost 15 percent—the solar equation is changing everywhere, even in Wyoming. Today, the price per watt of a rooftop solar system is half what it was 10 years ago. Data source: Lawrence Berkeley National Labs.
Get the data: CSV | XLS | Google Sheets | Source and notes: Github

“I’m not going to call it as disruptive as development of the personal computer or something like that, but really does have the chance to initiate some conversations that even five years ago were way on the fringe,” Geiger says.

For some people it’s gone even further than conversation. The Copeland family— parents Holly and Scott and 11-year-old twins Mia and Abby— lives in the foothills above Lander. They recently installed a rooftop solar array, which can generate about 40 percent of their power over the course of a year. On the day I visited though, they were relying on the grid; a winter storm had fully buried the solar panels under a foot of snow.

“Curse you snow, we could be making electricity!” Scott shouted, half-joking. Since the Copelands got their solar panels in November, it’s become something of a daily exercize to see how much energy they can produce. “They have this really cool website that you can go on and you can see like everything about your solar panels,” Mia said.

“My dad checks it, I don’t know, like every day, almost every day,” Abby chimed in, as Holly called out to Scott in the living room, “Do you check it every day, Scott?”

Fun as it may be, the family’s reason for getting solar panels was more practical. The Copelands are both scientists—Holly works for The Nature Conservancy and Scott is an air quality specialist— and they’re worried about climate change and healthy ecosystems. But ultimately, their decision to go solar hinged on the cost. Holly says they first looked into it three or four years ago, after neighbors put up a solar array.

“The economics of it…” Holly trailed off. “Just the panels cost more back then. The numbers just weren’t good enough.”

By their calculations, it would have taken 20 years just for the panels to pay for themselves. Since solar panel lifespans are around 25 years, that didn’t seem like a good bet. Fast forward just a couple of years, to last summer, when the Copelands got a new quote. This time, the break-even was 13 years, still not great, but Holly equates it to putting money away in a 401k.

“It’s, you know, our bond fund, except it’s our house,” she said. “It’s not somebody else, some other community’s investment project—it’s our project.”

The Copelands aren’t the only ones in Wyoming who have done that math in recent years. Scott Kane owns Creative Energies, a solar company based in Lander, and has been installing rooftop solar in the state for more than a decade. As solar is starting to look more financially reasonable, Kane expects it will grow. He says once one house in a neighborhood has solar, it often snowballs.

“It makes it a lot easier for the other members of that neighborhood to say, ‘Oh, well those are perfectly reasonable people that just installed solar on their houses. Maybe I now feel more comfortable with it.’” That trend is a threat to traditional utility companies. Where solar has boomed, in states like Colorado and Arizona, utilities are seeing revenues drop, and they are fighting back. For now, in Wyoming, there’s little talk of that. Utilities are mostly just trying to figure it all out.

“It’s something that’s so new that we haven’t really done a lot of research into it, into how it would impact us, or into how we could be a part of it and get out in front of it,” said Shawn Taylor, director of the Wyoming Rural Electric Association.

If the rapid rise of solar in other states is any indication though, it might be time for Wyoming utilities to start thinking about it. The Copelands, for one, are already talking about getting more solar panel for their house.