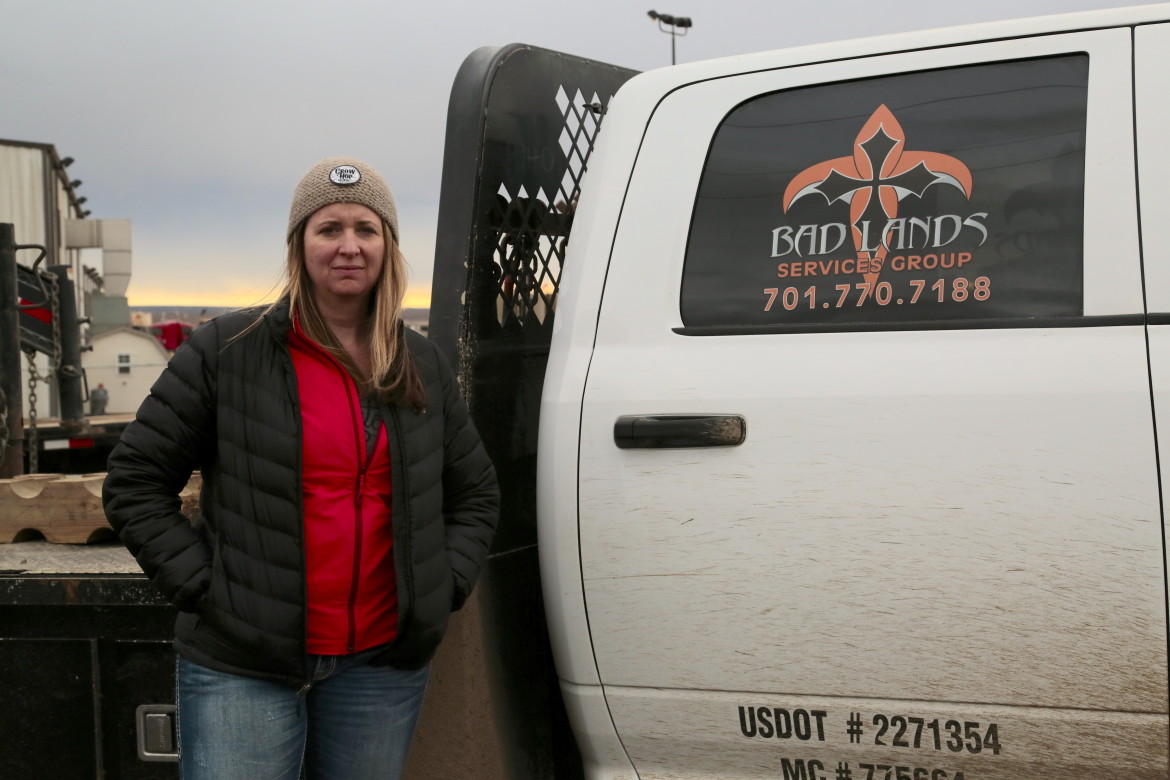 In the past few years, workers from all over America have flocked to jobs in the booming oil industry. For a lot of people struggling through their own hard times, it’s an opportunity for a second chance, and for some its their last resort. But since summer 2014, oil prices have dropped by half. Some 75,000 oil workers nationwide have lost their jobs, and more have had their hours cut.

Apryl Boyce is one of those workers. She’s 42, tall, tough-looking and pretty, with long blond hair tucked beneath a crocheted beanie. She came to the Bakken last fall, and has spent months driving a one-ton truck all over the oilfield, at all hours of the day, as a hot shot, a driver who hauls equipment from one job site to another. Recently, things have slowed down a lot.

Now, she waits by the phone most of the day. There are 80 fewer drilling rigs here in North Dakota than there were six months ago. That means less to haul around.

At the office of Badlands Service Group, the small oil field company Apryl works for, owner Jim Levasseur said his workforce is 40 percent smaller than it was a few weeks ago. He’s been cutting people’s hours — and then a lot of them quit.

“They’re wanting 60 to 80 hours a week and if they’re only going to get 40 hours a week they’re going to go home,” he said. “It may not be as much money, but at least they’re home every night and not sacrificing.”

Given how dangerous the oilfield is, Jim said he doesn’t blame them for leaving. “People get killed up here on a weekly basis. These are the worst conditions I’ve ever seen for working.”

Safety is only part of why Apryl is leaving. Her unpleasant housing situation is another major contributor. A week ago, Jim combined employee housing to cut costs. He asked Apryl to move in with 11 young men in a tired old ranch house on what used to be the outskirts of Williston (it’s now hemmed in by new apartment buildings).

“I try to wear bulky pajamas and heavy sweatshirts and try to be as unattractive as possible,” she said. “Because I don’t want to provoke any unwanted comments.”

Apryl looked for other places to live, but an average one bedroom here still runs over $2000. Her ad on Craigslist seeking housing didn’t work either: She received a bunch of offers of free rent in exchange for sexual favors.

“There weren’t any legit, comfortable offers,” she said.

But there’s another reason, a deeper reason, why she decided to leave. Ten years ago, her mother died. At that time Apryl sold everything she owned (except a storage unit full of her mother’s cookbooks) and began bouncing from job to job: oilfield trucker in Colorado, cattle ranch cook in Wyoming. She was running, she said, from anything she used to do, anything that made her feel like herself — until she got to the Bakken.

“It took the absolute grungiest, dingiest, darkest part of life to make me realize you can stop running,” she said.

The oilfield slowdown has given her a chance to pause. To think about what brought her the Bakken, and what no longer keeps her there.

“I lost myself in the oilfields,” Apryl said. “I lost myself chasing money for all the wrong reasons, and I’m not going to let it happen again.”

Two days later, Apryl left Williston for a mountain town in Colorado she had talked about a lot. She’s running again, but this time to a place that feels like home.