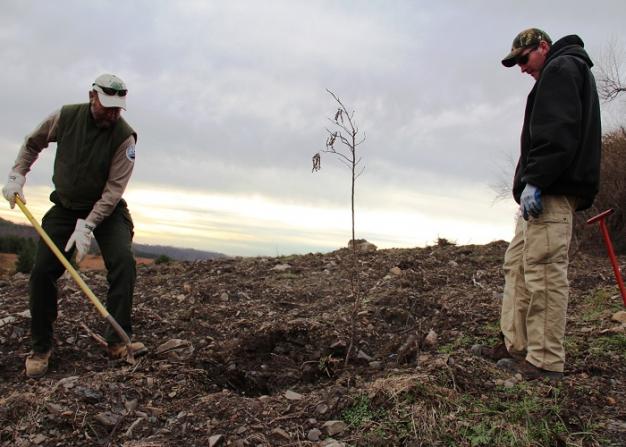 Patrick Angel pulls his pickup truck off a small road in the hills of Eastern Kentucky, and points to a long ridge covered with dried, brown grass.

“If you didn’t know where you were, you’d think you were standing in a prairie land in South Dakota or Wyoming, because it’s all grass,” says Angel, a forester with the U.S. Office of Surface Mining Reclamation and Enforcement (OSM).

This flattened hilltop is what’s left over from mountaintop removal. This is the controversial form of surface mining where the top of a mountain is blown up and shoved into a valley to access a coal seam below.

Many hills in Eastern Kentucky now look exactly like this one—an artificial mesa covered by lespedeza, fescue, and other grasses whose tight roots choke out other plants. As a result, trees won’t grow here.

“If we were to try to even plant trees in that thick matt of fescue and lespedezas—the trees couldn’t compete,” Angel says. “Basically Mother Nature is stuck in a place where she cannnot return the forests on her own.”

Solving One Problem, Creating Another

The ridge is like this because of a federal law designed to keep communities safe after coal mines closed. The Surface Mining Control and Reclamation Act was passed in 1977. Prior to the law, companies would routinely leave loose or unstable hillsides behind when they’d stopped mining.

The law created Angel’s agency—the OSM—to oversee reclamation and prevent unsafe mining practices. Angel was one of the first inspectors in the agency—he actually had badge number two.

Back then, it was not uncommon for landslides to slide off the top of a hill and go “into the back end of an occupied dwelling as the occupants were running out the front door,” says Angel. “We wanted to stop that so bad.”

The agency stopped those landslides, for the most part. It forced coal mine operators to compact their old surface mines and plant fast-growing grasses that would prevent soil erosion.

“I remembered myself going out and talking with operators about creating this golf course look—finely sculptured, man-made—where everything is packed in and tight and pastoral,” Angel said. “But Mother Nature doesn’t like golf courses.”

The landslides stopped—but trees would not grow back.

A Solution Comes – ‘Ugly’ But Effective

In the 1990s, a group of scientists came to Angel’s agency with a potential solution. They had studied how to re-forest old strip mines and had developed a system to do it. In a nutshell, the system involved tilling the surface mine like you would a garden before planting.

Angel says it took a while to get mine operators—and others at his agency—to buy in to the scientists’ ideas. Years of creating the ‘golf course’ look had conditioned them to creating ‘pastoral’ ridges. This new approach involved ripping up soil and leaving the ground uneven.

Eventually the agency embraced the technique, as did the coal industry.

At a former mine nearby, Angel shows off a field that will soon be planted with new trees. The slope had been covered by thick invasive grasses. But Angel’s group came through with a bulldozer and ripped up the grass, sprayed it with herbicide, and now it looks like a plowed field.

“It would take Mother Nature on her own to reforest these sites, decades, if not centuries,” Angel says.

A few miles from Angel’s planting site, Chris Barton leans over a stream stained reddish orange. The stream is at the foot of a large mountaintop removal mine that’s been closed for about 15 years.

Barton, a University of Kentucky hydrologist who studies coal mining’s impact on water, points out a pile of boulders upstream—visible through the leafless trees. The boulders were part of the mountain’s ‘overburden’—the layer of rock, soil and gravel coal mine operators remove with explosives, and push over a hillside to get at the underlying coal. In the process, the stream above Barton was buried with 200 feet of overburden.

Though the practice is becoming less common, thousands of hilltops in Kentucky, West Virginia, and other parts of Central Appalachia have been removed with this method. In Kentucky alone, mining is a cause of 1,500 miles of impaired streams.

Barton drops a conductivity meter, a rough measure of water pollution. Not surprisingly, the water pollution in the stream is well above acceptable levels.

Not that a meter is necessary. The stream bed is covered by what looks like red icing—iron from the rocks burying the stream. There’s so much of it in the water, it’s coating the rocks where insects and other critters like to hide.

“So the bugs can’t get under these rocks and hide,” Barton says. He tries to pull a rock off the stream bed to demonstrate, but can’t pull it up. “It’s like it’s cemented to the bed.”

The iron and other minerals that are polluting the stream are common byproducts of mountaintop removal mining, says Barton.

“When you mine, you’re taking a rock and blasting that into a zillion pieces and then suddenly it becomes a size where it can dissolve,” Barton says.

That’s why levels of salts and minerals in streams near this mining have been found to be ‘persistently elevated‘ to levels of pollution that are ‘acutely lethal’ to aquatic wildlife. Studies show wildlife populations decline in these streams.

Barton thinks if trees were to grow on top—that would prevent a lot of the runoff that’s causing this pollution. He’s working on a pilot project to demonstrate how to do this.

On A Mine, A Forest

There are signs this new approach to reclaiming old coal mines can work.

On top of a ridge in eastern Kentucky is the sprawling Starfire Mine. A few years ago, 400 miners worked on the ridgetop hauling upwards of a million tons of coal a year off the ridge. Today, like many mines in this part of Kentucky, production is slowing to a halt. Only two work on the hill now.

At the top of the mine, Paul Rothman steps through a gate to show off a young forest. There are two small cells of forest growing here—they were planted in the 1990s.

Rothman helped plant these trees back in the 1990s. He’s teamed up with Angel in the past to get more trees on top of old mines.

Today, wind-blown orchids, sweetbriers, and birches are sprouting from the forest floor. Rothman says at first it was hard to get mine owners to plant trees.

He’s had bulldozer operators nod approvingly at instructions to leave soil uncompacted—then have them sneak back onto a hilltop to pack down the dirt when his back was turned. But he thinks all the effort has been worth it.

“The stereotype is once these areas are mined you can never grow forest back on them—and what we’re trying to show people is that’s not quite accurate,” Rothman says.

Though Rothman and others have proven forests can make a comeback in the Central Appalachian coal fields, there are still around a million acres of grasslands on former surface mines that are in need of reforestation, says Angel.

Some of these sites are used to graze cattle or for development of shopping plazas or schools. But most are not used for development.  And much of it is prairie—a prairie the size of Rhode Island, spread out across four states.

The transformation of this landscape has happened in peoples’ backyards. And it can create tensions—even within families.

She used to argue about the issue with her brother, who’s a coal miner. But a conversation several years ago changed her viewpoint.

Her husband Jon was a schoolteacher. He had a secure job with benefits.

“So then finally I realized when he said that—it just, like, pricked my heart,” she says. “So I said I’m not going to talk about being against strip mining ever again.”

When asked, she said, no, she’d never want to move off the mountain she grew up on.

This story comes to us as part of a collaboration with Allegheny Front, a public radio program covering environmental issues in Pennsylvania.