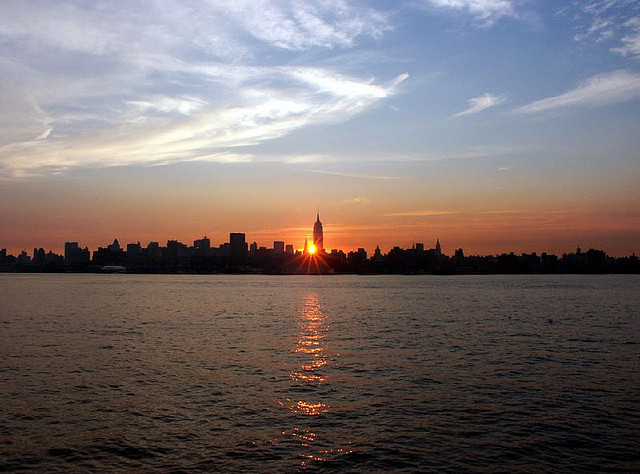 When the lights went out in New York City on August 14, 2003, less than two years after the September 11th attacks, New Yorkers initially feared terrorism. But the blackout was largely due to the fact that the Northeast electricity grid was simply stressed to the max by the summer heat. In addition to the heat, old power lines, overgrown trees, aging equipment, and human error also contributed. The result? During the dog days of that summer, 50 million people across eight U.S. states and Canada were without power for around forty-eight hours.

The Institute of Electrical and Electronics Engineers, known as IEEE, sets grid standards that are widely but not exclusively used by utility companies. The IEEE calls outages like the 2003 Northeast blackout, “Major Events,” defined as follows:

“…an event that exceeds reasonable design and or operational limits of the electric power system.”

As Inside Energy kicks off its new series, which investigates the future of the world’s largest machine (surprise! It is our electric grid!), today’s IE Question takes a trip down memory lane to revisit some of the “Major Events” during which the North American machine has failed miserably.

Let’s start with a weird one. On March 13th, 1989, a solar storm hit the Canadian province of Quebec, sending its entire electric grid offline. You’re probably wondering, ‘What’s a solar storm?’ Well, it is a temporary disturbance of earth’s magnetic field when the sun emits a large flare of gas. In this particular incident, the resulting solar cloud eventually hit earth, creating electrical currents in the ground which ultimately knocked out Quebec’s electric grid. Due to the sun’s unusual behavior, over six million Quebec residents experienced a blackout which lasted for 12 hours.

This one is fresh in many of our minds. The deadly and destructive hurricane hit the Northeast on October 29th, 2012, flooding streets, knocking out power lines, and devastating neighborhoods and key infrastructure. Over 8 million people in 17 states lost power and in some areas it took utility companies nearly two weeks to get it restored. According to FEMA, 73 people in the US lost their lives as a direct result of Hurricane Sandy.

On December 22nd, 1982, strong gusts knocked over a major transmission tower in California which then caused several more to topple. A variety of backup measures failed largely because they were not designed for such a massive disturbance. Over five million people in on the West Coast lost power.

A hot day late in the summer of September 2011 caught grid operators in the Southwest off guard. Deliberate outages, planned for maintenance purposes, combined with faulty monitoring equipment, operator miscommunication and a surge in demand due to warm weather resulted in a day-long outage that affected millions in California, Arizona, and Mexico. The loss of power knocked out traffic lights, causing gridlock in Southern California. Two reactors at a nuclear power plant along the California coast went offline after losing electricity, and nearly 3.5 million gallons of sewage spilled into the ocean.

Nicknamed Snowtober, this Halloween nor’easter produced unseasonable and unexpected October snow that broke snowfall records in many mid-Atlantic cities in 2011. Because of the resulting downed trees and power lines, over 3 million people in 12 states experienced power outages, some of which lasted over ten days.  Many towns cancelled or postponed Halloween.

This one is a biggie. On July 13th, 1977, lightning struck a substation north of New York City, triggering the loss of a transmission line which then overloaded several others. Less than an hour later, this surge, combined with human error led to the nearly all of the city losing power. As darkness continued over the next 24 hours, looting spread.

Taking the examples above, there are a lot of reasons why the grid fails. But it is usually a combination of extreme weather events, human error, poor preparation and aging equipment.

Aside from big headline-making outages, smaller, non-weather related outages happen all the time and can really add up. Inside Energy’s Jordan Wirfs-Brock recently reported, in her IE Question called “How Long Is Your Blackout?” that in 2013 (the only year we have complete data) the state of West Virginia had the most outages with the average customer experiencing 418 minutes without power. Vermonters, at the opposite end of the spectrum, each experienced just 7 minutes without power that year.