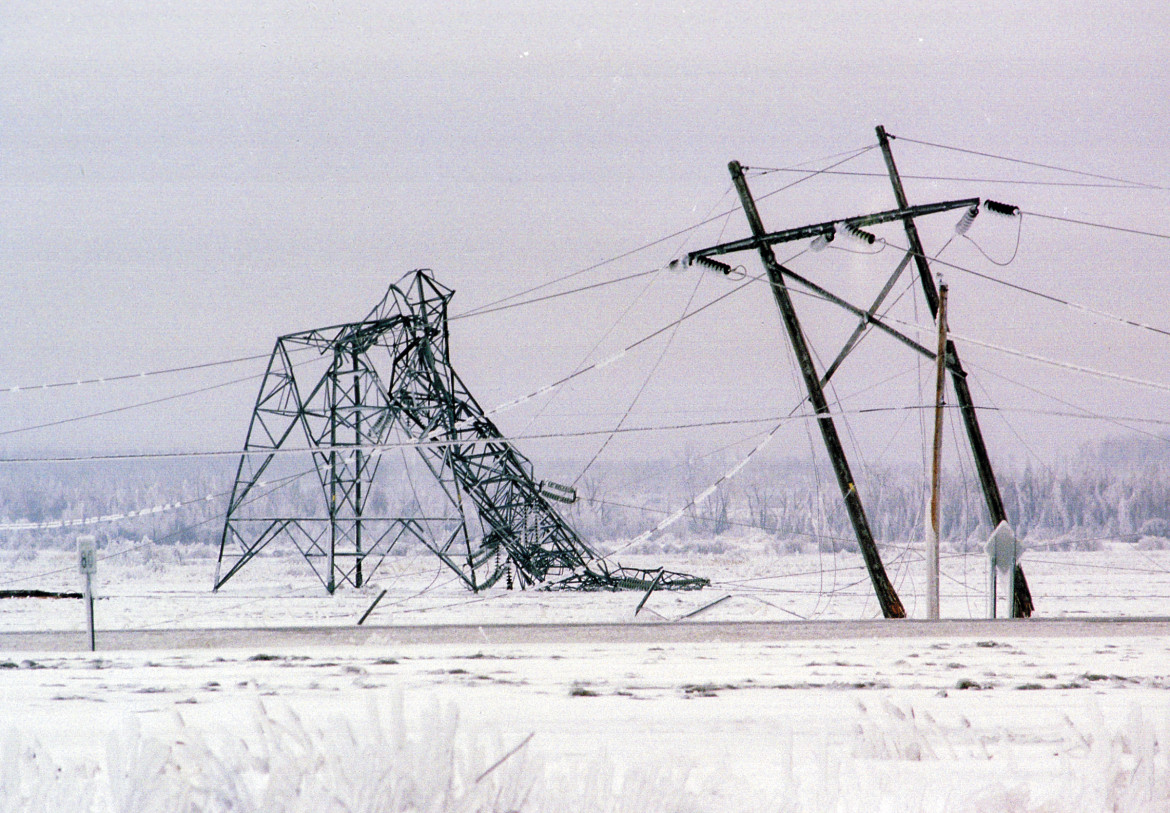 These transmission towers in Saint-Césaire, Quebec, collapsed during the ice storm of 1998 under the weight of the ice.

Part 1 in our Inside Energy series Blackout: Reinventing The Grid.

It was a blustery, cold January day in 1998 when the rain turned to ice. I was nine years old at the time, living in a town called Canton in upstate New York, near the Canadian border. The storm started early, but didn’t get serious until well after dark.

“I remember waking up in the night and hearing explosions outside,” my mom, Lynn Shepherd, recalled recently. “When the top of a tree comes off and it just splinters, the snapping is really an explosion. It’s like a gunshot.”

Upstate New York is a place known for its brutal winters, but the region had never seen a storm like this. Overnight, three inches of ice fell, coating everything. As explosions rang out around us, we huddled in an interior room of the house, hoping nothing fell on the roof. When the sun finally rose, my mom took her first look outside.

“You just saw a tangle of branches and power lines, crisscrossing the street outside our apartment,” she says.

Not a single power pole was still standing. Our lights didn’t work, neither did the heat or the stove. We had no connection at all to the outside world except a small, battery-powered radio, and the news coming from it was bleak.

The state of New York mobilized its emergency crews. “This is the largest response for a storm of this nature that the state has ever had,” then-Governor George Pataki told a reporter for North Country Public Radio.

The ice storm had left four million people without power, in the dead of winter. The huge, steel towers carrying the transmission lines had doubled over under the weight of the ice, as though they had been punched in the gut.

“It made the system seem very vulnerable,” my mom says, looking back on it. That’s a feeling many Americans have had in 15 years since that storm, in the wake of Hurricane Katrina, Superstorm Sandy, the 2011 blackout in the southwest, and the 2003 blackout in the northeast, which was the largest in our nation’s history.

If you could peer behind an electrical plug in your house, you’d find a massive network of transmission lines and power plants and a whole army of people bringing power to the socket in real-time, 24 hours a day. It’s the largest machine in the world: the power grid. Most of the time it operates invisibly, in the background, but when it fails, it often does so memorably. To most people, those outages seem like isolated events, but when you look at the trend, they’re not.

“The rate of these outages has increased dramatically every five years,” says Massoud Amin, a professor of electrical engineering at the University of Minnesota. His research shows major power outages have been on the rise since the 1980s, even as we’ve become increasingly reliant on electricity for every aspect of our lives. Traffic lights and gas stations run on electricity, and so do smartphones and ATMs. Amin remembers the first time he witnessed a major blackout, in New York City in 1965—long before our current era of technology dependence—and he says it was shocking to watch how quickly society ground to a standstill.

“Then we appreciate the essential underpinning of life-enabling, life-sustaining infrastructure that the power grid is,” he said.

When an outage is over, though, more often than not people forget. After all, the system does work most of the time. But Amin says we’re at a critical juncture. The grid is old and falling apart. It’s threatened by more frequent severe weather and new demands from technology and renewable power.

Until very recently, though, few people were even paying attention to large-scale grid reliability. The federal government still doesn’t require all utilities to track and share reliability data with the public. In 2013, the Energy Information Administration did start collecting national reliability metrics, but utilities only have to report that information if they already have it, and less than half of them do.

If you want more complete information about how reliable the power is in your state or community, you have to do what Inside Energy has been doing for the last few months: request the data from your public utilities commission—if they even collect it—and then muddle through huge data sets, often in unusable formats.

Amin says if we don’t know how bad reliability is, it’s hard to persuade the government and utilities to spend money to fix the problems. “The word hasn’t gone out there to the real stakeholders, the people of our nation,” he said, adding that the problems are only becoming more urgent.

“I don’t want to be a senior citizen and live in the dark,” he said, “So it’s personal, it’s for selfish reasons that I’m looking at how we can improve the system in the next two decades.”

The ice storm in 1998 ended up taking out our power for two weeks, which made basic things like drying clothes and making food monumental tasks. We survived mostly unscathed, but others didn’t, which prompted plenty of reflection about what went wrong and how to avoid a similar situation in the future. For some, it even led to questions about the electricity system as a whole, and whether we should really rely so heavily on a machine so few of us understand.

“Having to sit in your window and contemplate just the magnitude of devastation around you, it just gives you pause to think about should you be on the grid or not?” my mom recalls she thought at the time.

In the past, the choice was black and white—on the grid or off—but today, the grid itself is being reinvented by new technologies that change the way we produce, distribute and use electricity, and the lines between on and off are getting blurrier. That reinvention will only happen, though, if we all pay a little bit more attention to the massive energy infrastructure we all depend on, and not only when we find ourselves in the dark.