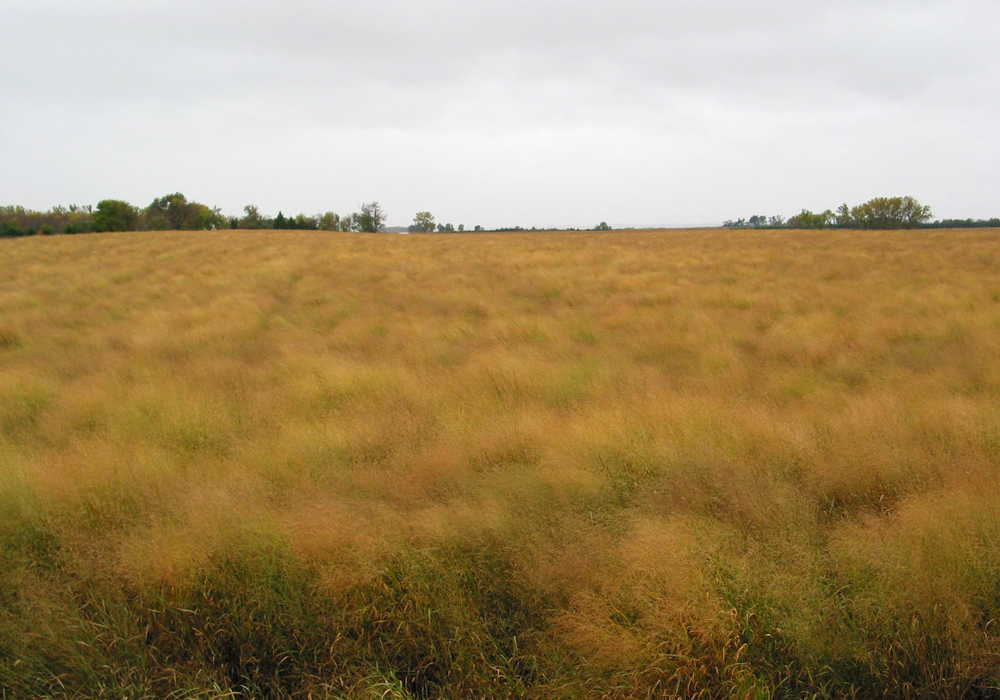 In the fall, switchgrass ripens to a golden brown. It is normally harvested in early November when the plant has gone dormant. USDA grass researcher Rob Mitchell stands in a field of switchgrass grown to make ethanol. Switchgrass is knee-high by the end of May but can grow as high as 10 feet.

The federal government’s complex set of rules meant to spur a renewable fuels industry has fallen behind one of its main goals: cut greenhouse emissions from gasoline.

Nearly a decade after the rules were drafted, low-carbon fuels have yet to arrive. The Environmental Protection Agency issued proposed new rules in May of this year that scale back the amount of biofuels mixed into America’s fuel supply. That comes as a disappointment to Midwest farmers, and to biofuel advocates whose product has so far failed to flourish.

Almost all ethanol made in the U.S. currently is produced from corn. But to grow more grain, farmers plowed up a lot of pasture, which has led some researchers to say the carbon savings have been cancelled out. Round bales of switchgrass are piled in a barn for storage. This is how the energy crop is harvested. One acre of switchgrass can produce 6 tons of biomass and around 480 gallons of ethanol.

Initially, corn ethanol was meant as a bridge to low-carbon fuels like cellulosic ethanol, which is produced from grasses and other inedible parts of plants. The Renewable Fuel Standard (RFS), as the ethanol rules are called, mandate oil companies to blend certain amounts of biofuels into gasoline and include requirements for cellulosic ethanol. The EPA has just issued new production targets for 2016 which scales back the amount that needs to be mixed into the fuel supply. That has left the ethanol industry in the lurch. Cellulosic ethanol is made by breaking down the cellulose, or building blocks, in the stems and leave of plants like this switchgrass. Some other materials used to make cellulosic ethanol are wood, corn stalks, wheat straw, and algae.

“Put yourself in the position of an investor. The only thing that makes your investment viable is a government mandate for that product,” Tyner said. “Are you willing to put $400 million on the line that that government mandate is always going to be there?”

The problem with the mandate is that oil companies say they can’t use as much ethanol as the law requires. They’re lobbying the EPA to cut the RFS, while ethanol companies are fighting to keep it intact. Meanwhile, the drama is scaring off investors.

In 2014, the U.S. produced just 2 percent of the cellulosic ethanol originally called for by the RFS.

Large-scale plants in Iowa have come online to make cellulosic fuel from corn stalks. One in Kansas uses wheat straw. All in all, however, the renewable fuel that was supposed to tip the scale on greenhouse emissions barely registers today.

“We’re not there yet, technically or economically,” Tyner said, “but if there is to be growth, that’s where the growth will be.”

Investors could bolster support for cellulosic ethanol. Analysts say that is only likely to happen if they’re given firm assurances from the EPA about the direction of federal ethanol policy.

Jeremy Martin with the Union of Concerned Scientists thinks investors will come back if they know what they were dealing with. Clear EPA policy goes a long way.

“Even if it’s not what they’d hoped for, at this point, you just need to know where you stand so you can make decisions about how to move forward,” Martin said.

That’s not good enough for Michael McAdams of the Advanced Biofuels Association. He says the law will never go beyond corn unless Congress rewrites it to favor lower carbon fuels.

“I mean, if what we were trying to do with this policy in 2007 was encourage this advanced industry, the current policy’s not doing the job and the numbers reflect that,” McAdams said.

There have been proposals in Congress to change the RFS, and a few that would repeal it entirely, but none of them appear to be going anywhere soon.

That leaves the EPA’s RFS mandates as the signal the industry is looking for. With a vote of confidence for cellulosic ethanol, energy crops other than corn may find traction. Mitchell inspects a patch of switchgrass planted to produce ethanol. Switchgrass is perennial and drought tolerant, which makes it a good option for areas where it is difficult to grow corn or soybeans.

Rob Mitchell, a U.S. Department of Agriculture researcher working on crops for cellulosic ethanol, sees an industry in transition. He studies the use of switchgrass for energy.

“The unknown is, ‘Where do you sell it?’” Mitchell said. “The market for cellulosic ethanol just isn’t there yet. If you want a farmer to do it, it’s got to pay the bills and we’re fully aware of that.”

Editor’s Note:   An earlier version of this story misstated the portion of the cellulosic ethanol mandate produced in 2014. The correct figure is roughly 2 percent.

This story was updated after the EPA released it’s new proposed rules on the RFS on Friday May 29.

This story was reported with help from Inside Energy’s Emily Guerin.