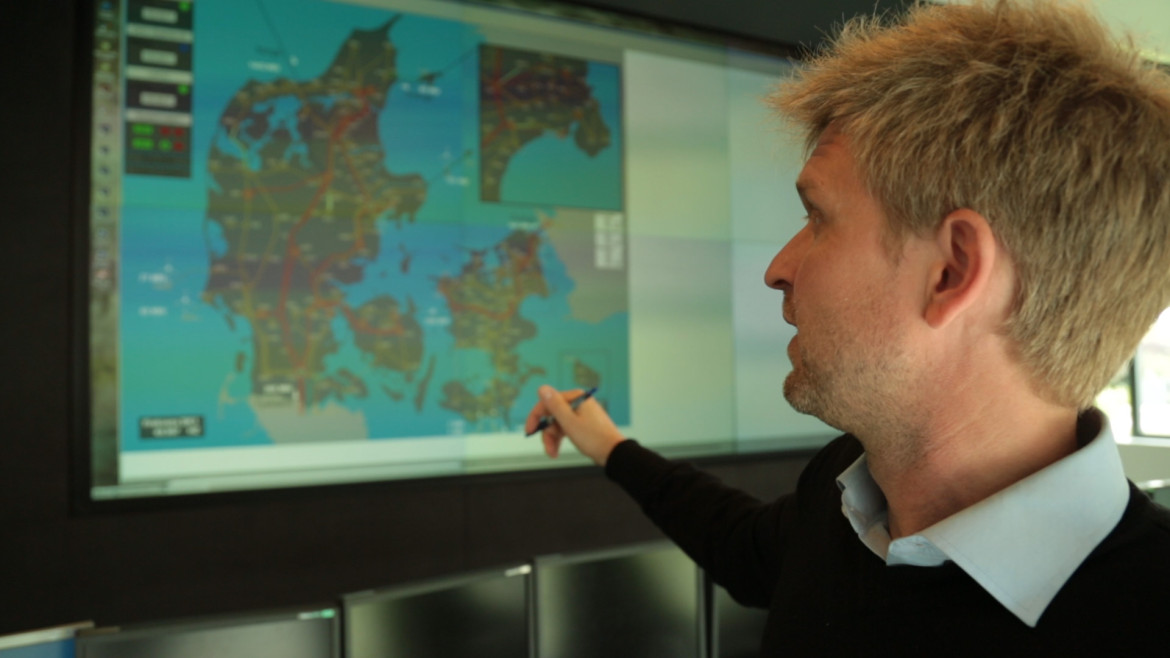 Jesper Rasmussen shows a map of power flow through Denmark inside the control room for Denmark's transmission grid. The roof of the Confederation of Danish Industries building is covered in solar panels.

From the roof of the Confederation of Danish Industries building in downtown Copenhagen, Denmark’s energy past and future are within view. Smokestacks from several coal-fired power plants share space on the horizon with a fleet of wind turbines.

But most of those smokestacks are coming down soon. Denmark is transitioning to 100 percent renewable energy—the culmination of a decades-long effort that began with the energy crisis of the 1970s.

“We found out in the 1970s we just used too much energy,” said Iver Nielsen, spokesman for State of Green, a public-private partnership that promotes Denmark’s green economy. Specifically, the country used too much imported oil in its power plants. When prices skyrocketed because of the oil embargo, it was a catastrophe. Iver Nielsen is the spokesman for State of Green, a public-private partnership that promotes Denmark\’s green economy.

“We had to say never; we’ll never see this again, we must do something about this,” Nielsen said.

Out of the crisis, a policy direction emerged for the country. Initially, the government promoted energy efficiency and switching to coal-fired power plants, since coal didn’t have the same supply chain issues as oil. But Denmark doesn’t have its own coal reserves either, and as climate change became a concern and technology improved, the country saw an opportunity to use an abundant domestic natural resource: wind.

Now, the country gets almost half its electricity from renewables—39 percent from wind alone.

It has taken decades and lots of government assistance to get to this point. Yet unlike in the U.S., which seemingly changes energy policy with every new President,  support for renewable energy in Denmark has been consistent across political parties.

“We have had a conservative government, and we have a social democrat government, but the energy policy has continued,” Nielsen said.

Denmark has achieved this remarkable consensus on energy policy in a few ways. First, demographics: the country is smaller than West Virginia, and has 5 million people, compared to 320 million in the U.S. Second, a tiny fossil fuel industry. Denmark doesn’t have much in the way of coal, oil and natural gas, so there’s been little pushback from those industries as the country has shifted away from fossil fuels. That consensus is a big reason why the country’s renewable sector is so well developed.

“These are investments over 30, 40, 50 years, so when you have private investors investing in this,[they] must be sure that the ground they are making the investments on [is] stable,” Nielsen said.

Still, decades of political support isn’t a requirement for large-scale renewable energy investment, as evidenced by the fact that the United States appears to be heading in a similar direction as Denmark. In 2014, Americans used more renewables than any year since the 1930s, when wood was a primary energy source. Wind and solar are growing fast, even though they still account for just a tiny fraction of total consumption.

But there are serious challenges—both technological and social—that come along with more renewable energy. Jesper Rasmussen shows a map of power flow through Denmark.

One is grid stability. Denmark’s grid operators have had to learn in recent years how to keep the grid in balance while increasing the amount of renewable energy to its current level of almost half the country’s power supply.

“Some days the production from our wind turbines will be larger than the total consumption, and some days there’s no wind at all,” said Jesper Rasmussen, the spokesman for Energinet, which runs Denmark’s transmission grid.

Their answer: build a massive transmission system to import and export power to other countries. (Transmission has been a major barrier to building renewable in the U.S.). Rasmussen pointed at a giant map, showing energy flow throughout Denmark and neighboring countries like Sweden, Norway and Germany.

“It was easy to manage 10 percent [renewables],” Rasmussen said, but higher percentages are harder. “When you get 60, 80 percent it will be even more difficult, so at that time you would need storage, you would need flexibility, smart grid.”

By flexibility he means the ability to store power for later, or to use electricity when there is plenty of renewable power available and not when there isn’t. There have been several test projects in Denmark, including the EcoGrid EU project profiled by Inside Energy, but widespread commercial deployment is still a way off.

Part of the problem is no one has heard of the smart grid. Jørgen Christensen is the CTO of Dansk Energi, the Danish Energy Assocation.

“If I would ask my sister whether she would have flexible or smart charging of her electric vehicle or heat pump today, she would say ‘well, I haven’t heard about it,’” said Jorgen Christensen, the chief technology officer for Dansk Energi, the Danish energy association. “So that’s where we are.”

Christensen argued that in the past, they focused too much on developing the technical solutions, and not enough on convincing people they’re necessary – something that’s a problem in the U.S., too. Electric cars and smart thermostats exist, but for most people, it’s not clear why they should buy them. Dansk Energi has hired anthropologists and social scientists to figure out how to convince people, but Christensen expects it will take time, maybe a decade or more.

“I think we, in a bit naive way, expected that would just follow automatically,” Christensen said. “And I can assure you that’s not the case.”