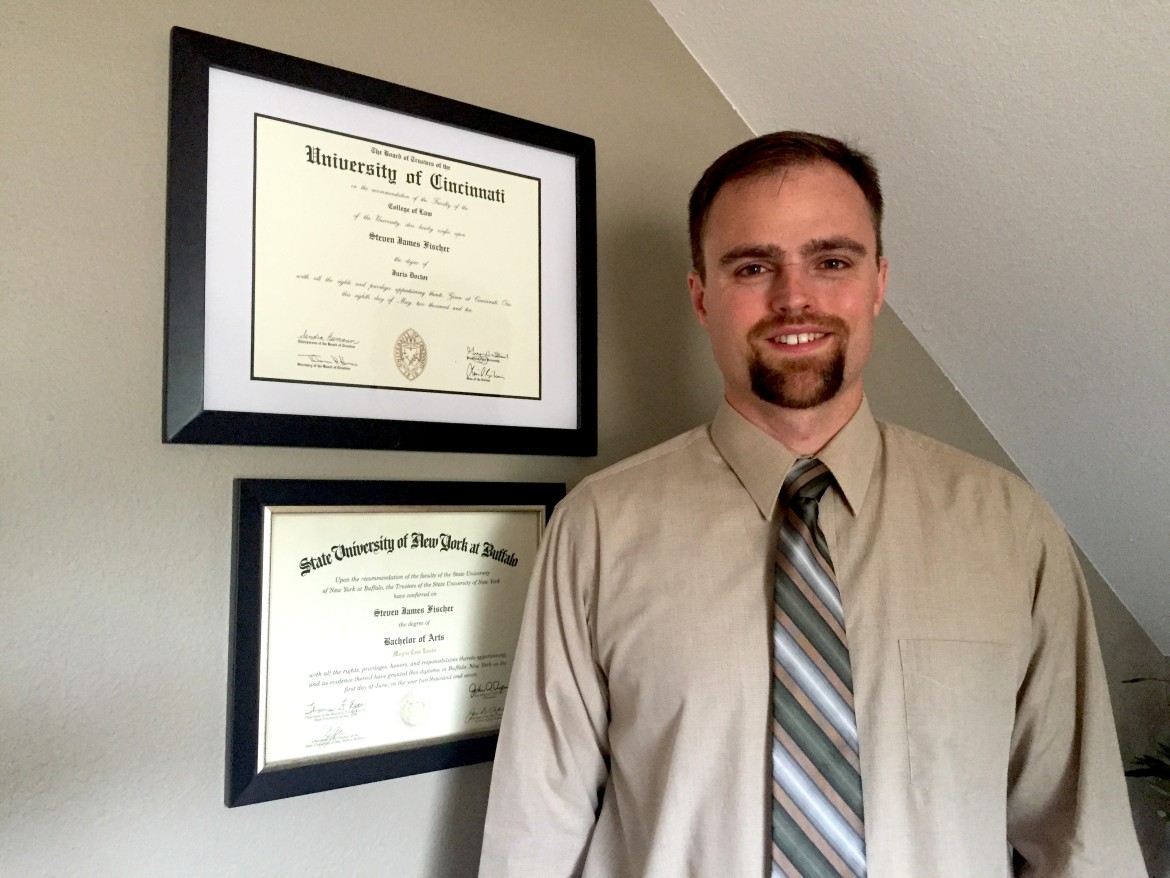 Steve Fischer finished law school in Ohio in 2010 — one of the worst years to graduate in recent memory. Less than 70 percent of law school grads who passed the bar in Ohio that year landed a job as an attorney. He finally called an old friend and asked if he was hiring.

He was — in fact he was desperate for help. Soon, Fischer, “was making better money than most of my law school classmates.”

His job? It wasn’t exactly something he had studied for. He ended up loading crude oil onto rail cars. Like so many other down on their luck Americans, Fischer had landed in North Dakota’s Bakken oilfield.

His co-workers soon found out about his background and began asking him for legal advice on things like drunk driving and reckless endangerment charges and plea deals. Of course he couldn’t legally advise them, but he started doing research for them. And that’s when the big realization happened.

“There was enormous demand for legal services,” he said. “Why don’t I hang my own shingle?”

The number of criminal law cases in rural western North Dakota – site of the Bakken oil boom — has tripled since 2009, as have the number of mineral rights disputes. Now, entrepreneurial young attorneys like Fischer are moving here and setting up their own practices.

Attorney Richard LeMay sees that enormous demand every day at Legal Services North Dakota, which serves the low-income and elderly.

“Ordinarily we have a lot of people that call us because we’re free,” he said. “Now they’re calling us because they can’t find representation any other place.”

Of course, the shortage of lawyers in rural America is not new, or uncommon. What is uncommon is the crazy increase in crime and legal disputes in an area without the legal infrastructure to handle it. The number of attorneys has been increasing; there are about 70 more in the oil patch now than in 2010, according to the North Dakota Supreme Court.

But LeMay says it’s still not enough because, “the growth in attorneys has been primarily for the purpose of meeting the needs of the oilfield industry, not for the needs of the residents in western North Dakota.”

The shortage is particularly acute in criminal defense.

Robin Huseby runs North Dakota’s Commission on Legal Counsel for Indigent Defense. She spends about 80 percent of her time trying to find more attorneys to help defendants in the oil patch. She had done “kind of crazy things” to meet the constitutional requirement to provide representation for low-income defendants, like paying lawyers to drive five hours to oil patch towns like Williston.

The situation is complicated by the fact that the cases have gotten more complex and time-consuming. In the Northwest Judicial District, which encompasses the heart of the oilfield, felonies increased 436 percent from 2009 to 2014. Felonies now make up a larger percent of the total number of cases than they did before the oil boom began around 2008.

There are a lot of explanations for the increase in crime. Thousands of people have moved to the Bakken region in the past few years – Census data woefully underestimate the total because so many live in temporary housing or are transient – and more people means more crime. Many of those new residents are young men with good-paying jobs and not much to spend their money on. Plus, local law enforcement was not prepared for the influx.

For Huseby, that means the attorneys here have to know what they’re doing.

“I don’t want to send somebody in that compromises them or, more importantly, the defendant,” she said.

Steve Fischer is one of those new attorneys working with Huseby (he has been paired with a mentor). He’s also doing private practice, and has taken an unusual approach to attracting new clients: hanging fliers in oilfield RV parks and Laundromats, and talking to ministers and bartenders.

“Who do people go to when they get in trouble: either their pastor or their bartender,” he said.

Even though Fischer expects the majority of his clients will be from the oil patch, the high cost of living forced him to stay in Bismarck, about two and a half hours from the heart of the Bakken. He said a comparable office in Watford City or Williston could have been five times as expensive. Housing is also a barrier — I met one young attorney who camped in a tent when he first arrived because he couldn’t find a place to live.

Another barrier to fixing the shortage of attorneys in rural Western North Dakota is the unfamiliarity of the region to many people. University of North Dakota Law School Dean Kathryn Rand says her job is to make the idea of starting a solo practice in a rural area less daunting to law students. The law school recently started a summer internship to place law students with rural judges as clerks. Nebraska, Iowa and South Dakota have similar programs. The idea is that getting to know a rural place before opening your own practice can make a big difference. That was definitely Steve Fischer’s experience, and it’s paid off.

“I can easily see myself living the rest of my life in North Dakota,” he said. “I love it here.”