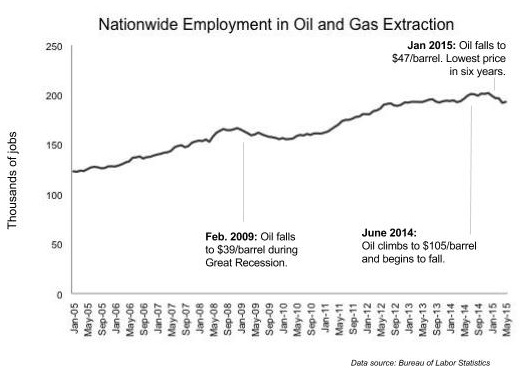 Oil prices fell off a cliff this winter, plunging from over $100 a barrel in June 2014 to under $50 in January 2015. We read reports that tens of thousands of oil workers had lost their jobs, but because the oil and gas industry is seasonal by nature, especially in frigid energy states like Wyoming and North Dakota, it was hard to figure out which component of the layoffs was seasonal and which was caused by low oil prices.

But now it’s summer, the time of year when the oil and gas industry should be humming along and re-hiring all those winter-idled workers. And looking at the data, it’s easy to see that there aren’t as many oil and gas extraction jobs, which includes things like drilling, as a year ago (for the full definition of what falls under oil and gas extraction, see here). As of May 2015, nationwide there are 193,000 workers, down from 196,000 a year ago, which you can see in this graph. That’s the big picture. But what about in individual oil and gas producing states? Let’s start with Texas, the number one oil-producing state. Texas’s oil and gas extraction job curve looks pretty similar to the nationwide extraction curve, doesn’t it? That could be because Texas is the number one oil-producing state with the largest oil and gas workforce. Job numbers there are barely lower than they were at this time last year: 100,600 in May 2015 compared to 101,000 in May 2014.

Now let’s check out Alaska. Oil production there has been falling since the late 1980s. But the state has been adding oil and gas extraction, well-drilling and support jobs since 2005 (which is as far back as this dataset from Bureau of Labor Statistics goes), although at a notably slower rate since the Great Recession. There are slightly more oil and gas workers in Alaska in May 2015 than the same time last year. Oil and gas employment in Alaska has held fairly steady over the past year.

Not every state has data on the number of jobs in the oil and gas sector alone; it’s often lumped together with mining and logging. North Dakota is one of those states. But it’s still worth looking at the nation’s number two oil-producing state, where coal mining jobs have been relatively stable but oil and gas jobs have sky-rocketed in the past decade (North Dakota is one of the least-forested states, so there’s not really a logging industry). Jobs in the mining and oil and gas sector have fallen off steeply in North Dakota since the winter, down 4,300 from January to May. It’s worth noting that in the past few winters, the number of jobs in May has been higher than in January. This year, seasonal hiring hasn’t picked back up like in years past.

To get a sense of what we might expect to see in the future, I talked to Mohsen Bonakdarpour, an economist at IHS. He is expecting job losses to continue throughout this year and turn around sometime in 2017.

“Oil prices have recovered and stabilized. They’re not constantly going down,” he said, “there is hope in the future.”