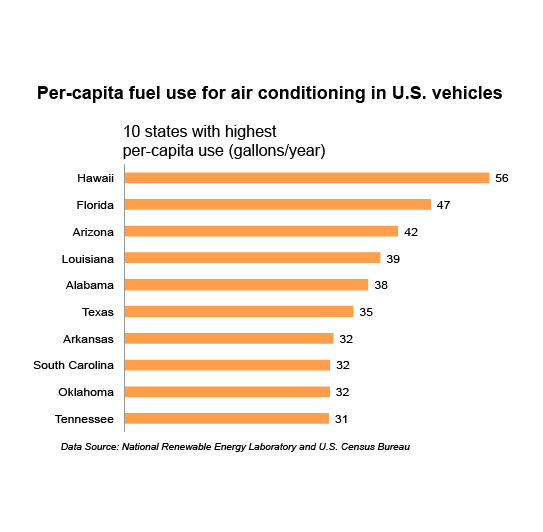 This week, we turn to you, our audience, for our IE Question. Our new focus is all about answering YOUR questions about the energy topics we cover. This time, the age-old: What’s the more fuel efficient way to beat the heat when you’re driving: turning on your air conditioner, or rolling down your windows?

“I’d really like to know what’s the best thing for the gas mileage,” asked divinity graduate student Cathy Jaskey, “because I’m trying to cut down and decrease my carbon footprint.”

You might be thinking, “Didn’t Mythbusters (the Discovery Channel show devoted to investigating myths and folk knowledge using science) do that already?”

The answer is yes, yes they did. They found that it’s more fuel efficient to roll down your windows than to use your air-conditioner.

But not everyone agrees. Public radio’s favorite car experts Tom and Ray Magliozzi, of Car Talk, also addressed this question back in 1990, in their newspaper column, and gave the opposite answer. Ray wrote, “The answer is that you get better mileage by rolling up the windows and using the air conditioner.”

So, who’s right? Well, in the Mythbusters segment, the guys only ran their test with one kind of vehicle – a Ford Expedition SUV – at only one speed: 45 miles per hour. Real driving, however, is a little more complicated.

Steve Iona, physics professor at the University of Denver, says one reason it’s difficult to answer the question is that there are a wide array of variables that affect your gas mileage. One of the most important ones, he says, is the force that slows down your car as it moves through the air. It’s called drag. “In these situations,” he said, “we’re trying to put the car where there is air. So somehow we have to move the air out of the way.” The more drag, the harder your car’s engine has to work to move.

Physics tells us that the most important factor in determining drag is your car’s speed. As you drive faster, drag increases—not proportionally, but exponentially. That means a highway cruising speed of 65 miles per hour works out to a pretty hefty drag force, acting on your car to slow it down.

Iona says speed isn’t the only factor. The shape and surface of the vehicle also affect drag. In general, the less smooth an object’s shape, the larger the drag force. The more you roll down your windows, the less smooth you make the shape of your car. If you were swimming, this would be like starting out with a sleek Olympic uniform, then putting on a t-shirt, and then a sweater, and maybe a fluffy scarf. All this adds up to a drag force that’s greater when you open your windows, and increases exponentially as you drive faster.

What about the other side of the question? What happens if you shut your windows, and turn on the A/C instead?

John Rugh, an engineer at the National Renewable Energy Laboratory (NREL) in Colorado, says running your A/C does hurt your gas mileage, by borrowing some of the energy your car would normally use to move forward. Rugh’s lab has calculated just how much gas that borrowing costs us. According to analysis conducted in 2002, all light vehicles in the United States – that includes SUVs, minivans and sedans – use about 7 billion gallons of gas for air conditioning per year.

That works out to only about five and a half percent of total gasoline use, on average, for the country. Of course, drivers in hotter states probably spend more gas on A/C. We used Census data from 2000 (the same year that the data in NREL’s analysis comes from) to calculate the per-person use of gasoline for each state.

The data here are not adjusted for average miles driven in each state, so it may be that people drive more in the states with high per-capita A/C fuel use. It’s also old information – the NREL report is from 2002. John Rugh says they’re in the process of updating the analysis, though he doesn’t yet know when the new report will be released.

Still, 7 billion gallons of gas is significant. But how does it compare to gas used with the windows down? John Rugh says it all depends – once again – on speed. “There could be a crossover,” he said, “where at slow speeds you could drive with the windows down, and if it’s not too hot out, you could be comfortable. And that’s what I do.” But at high speeds, he says, there’s likely to be so much drag that your A/C is more efficient than rolling down your windows.

As with so many energy problems, there are too many variables in play to give a golden number, an ideal speed, for when to switch from your windows to your A/C. So just remember this: [tweetable alt=”Want better gas mileage? Roll down your windows when going slow, use your A/C when going fast.” via “InsideEnergyNow”]Rolling down your windows when you’re going slow, and using your A/C when you’re going fast, is a pretty good bet.[/tweetable]