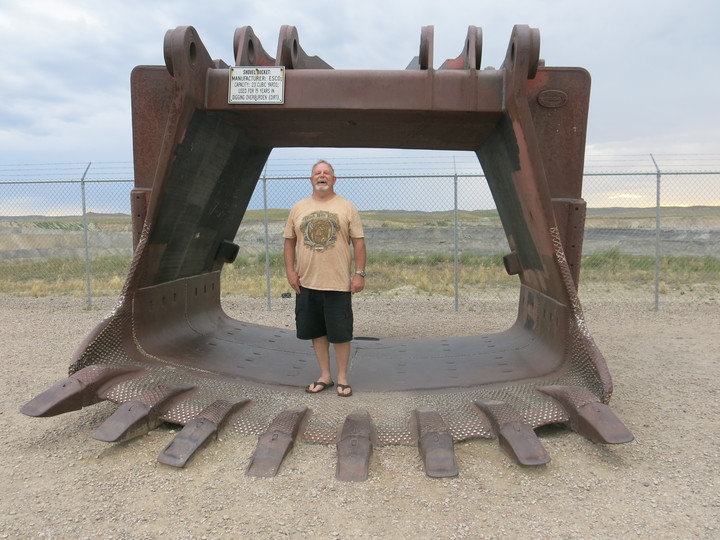 Third-generation coal miner Kent Parrish was blown away the first time he saw a Wyoming coal mine.

“Seventy-five to a hundred foot coal seams!” he said, peering down in the huge black pit of the Eagle Butte coal mine, north of Gillette. “If we hit a six foot seam back home, we thought we hit the motherlode.”

Parrish is originally from West Virginia, but Appalachian mines have been hit hard by a recent downturn in the coal market. West Virginia has lost a quarter of its coal mining jobs since 2011.

After weathering two layoff notices, Parrish decided to take Alpha Natural Resources up on an offer to transfer him to one of the company’s mines out west. Last December, he moved, along with a dozen or so of his fellow miners. After a 1700 mile road trip, Parrish found himself in Wyoming, driving a 400 ton haul truck at the Belle Ayr mine.

“As a kid growing up, everybody had the Tonka toys,” he said. “You’re just a grownup driving a big Tonka toy. That’s about what it amounts to.”

Parrish hasn’t gotten used to Wyoming’s wind and lack of trees, and while he’s bought cowboy boots, he says he’ll never buy a cowboy hat. But he does already have Wyoming plates and a Wyoming driver’s license.

“I think I’ve found the promised land,” he said. He’s planning to stay. While the coal industry in other parts of the country has fallen on hard times, the Powder River Basin has been left largely unscathed. The mines around Gillette produce almost 40 percent of the nation’s coal, supplying power plants in 32 states. The town’s population has doubled since 1990.

Busts do too. Avery remembers a few years back, there were a lot of Michigan license plates around town—laid off autoworkers who had been recruited by the mines.

Now, Gillette is facing its own possible downturn. Under the Obama administration’s new Clean Power Plan, demand for coal is expected to plummet. Wyoming could lose a third of its production, or more.

“I think Wyoming coal will be the last man standing of all the coal,” Avery said.

How long it will survive is an open question though.

Hardy was born and raised in Gillette, and started working for the coal mines straight of high school. In 2013, he and his partners opened the brewery. It’s just one of downtown Gillette’s many new businesses. There’s a cupcake shop and a meadery—a bar that serves honey wine—along with an upscale men’s clothing store and a whiskey barber opening up next month. But those business all depend on the coal industry’s success, and recent bankruptcies and coal plant closures nationwide are making that look more tenuous.

“I think people are shocked, recently, by the upheaval, like ‘wow, that just happened,’” Hardy said. “We are not in a good position.”

Under the new regulations, the US is expected to be burning coal for just under 30 percent of its power in 2030, compared to almost 40 percent today.

“When you look at the number of people that work here, and the amount of money that’s invested in these mines, it’s pretty hard to believe that they could ever all go away,” said David Bacca, who manages an explosives firm that contracts with the coal mines.

Unlike most people in Gillette though, Bacca thinks the mines will go away, and the town with them, unless it diversifies its economy.

“I came from a little town called Raton, [in New Mexico], but when that coal mine closed, it took it twenty years, but it’s slowly drying up,” he said.

So far, Gillette is showing no signs of drying up. There are help wanted signs everywhere, and new buildings. And people like Kent Parrish, the coal miner from West Virginia, are still arriving, in the hopes this coal boom town keeps booming.