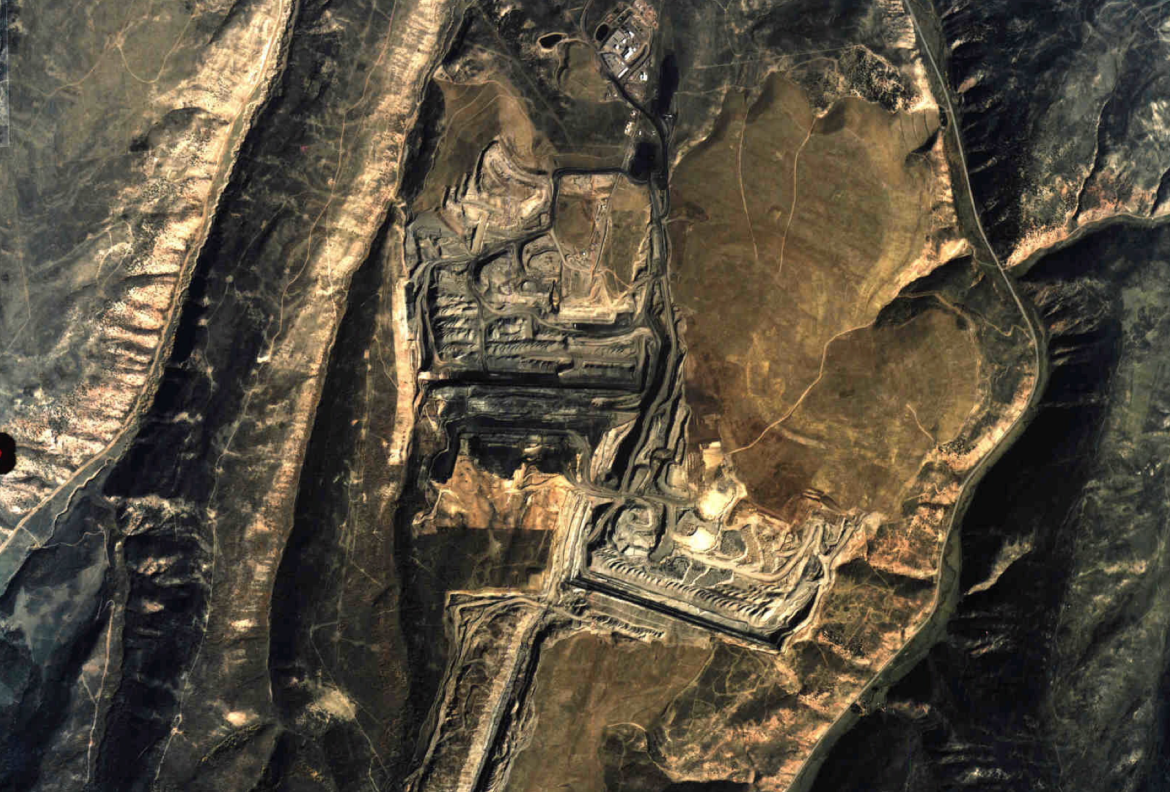 Aerial photo of Colowyo coal mine near Meeker, Colorado.

Standing on a windy stretch of highway with Karla Oksanen, we peer into a vast, dark, open-pit mine near Gillette, Wyo. She and her husband live so close to Eagle Butte Mine that when operators detonate dynamite to clear dirt away from the coal seams, they can feel it.

“The shaking from the blasts, yeah,” Oksanen said with a laugh. “It’s kind of like an earthquake!”

Over the years, Oksanen and the coal mine have managed to co-exist, but these days she is concerned about the issue of clean-up. Eagle Butte Mine is owned by Alpha Natural Resources, a coal company that filed for bankruptcy in August.

Regulators estimate it would cost over $400 million to restore the land that Alpha has mined in Wyoming. But in its most recent financial filings, the company listed nationwide liabilities two-and-a-half times greater than its assets. The question of who will take on that clean-up debt and how it will get paid back is getting worked out in bankruptcy court.

Using data from the U.S. Office of Surface Mining, Reclamation, and Enforcement, Inside Energy calculated that, in the top ten U.S. coal producing states, over one million acres of land has been “disturbed” for coal mining operations. Reclaiming those mines, filling them with dirt and recreating the ecosystem that once was, is expensive. As the industry-wide downturn rapidly advances, coal companies may no longer have the cash on hand to pay for billions of dollars in clean-up costs.

From her house, Oksanen can hear the mine’s big machinery and see the dust that is kicked up. She sees funding for proper clean-up as an immediate and ongoing concern and she worries that that funding could ultimately fall to the state. Karla Oksanen has lived next door to Eagle Butte Mine for over 20 years.

“It would be a huge program to try to fill it all in. Hopefully, they won’t leave it to the taxpayer to pay the bill,” Oksanen said.

Leaving it to the taxpayer is exactly what is never supposed to happen. Before mining even begins, federal law requires that coal companies provide financial guarantees that clean-up will be paid for, even if the company goes under.

But there is a certain type of financial guarantee behind billions of dollars in outstanding clean-up costs that isn’t much more than a promise. It is called self-bonding.

“A self bond is basically like an IOU. It’s just kind of a piece of paper that says hey, you know what, I’m good for it,” said Clark Williams-Derry with the Sightline Institute, a Seattle-based think tank focusing on sustainability, energy, and the environment.

States administer their own reclamation programs so the requirements can vary, but in order to self-bond, coal companies must first pass a test of financial strength, outlined here. But even in a struggling coal market, many companies have been approved to self-bond, despite questionable financial status.

“Big companies that seemed to be too healthy to fail, too big to go under that are approaching bankruptcy and they’ve been self-bonding,” Williams-Derry said.

Out of top coal producing states, Inside Energy found that Wyoming has the highest rate of self-bonding at 76 percent. But the issue extends far beyond the state’s coal-rich Powder River Basin. Over half of the projected costs to clean-up mines in at least four other states – Colorado, North Dakota, Indiana and Texas – are covered by self-bonds. The practice of self bonding allows companies to run a coal mine without actually setting clean-up money aside into an account. In Wyoming, the top coal-producing state, 76% of clean-up are self bonded, which means they aren’t backed up by cash.

Alpha Natural Resources is self-bonded for reclamation obligations in both Wyoming and West Virginia, so those states are two of the first to be forced to deal with the issue of mine reclamation this downturn. Wyoming regulators defend the program and say they couldn’t take any “adverse action,” against Alpha right now due an order from the bankruptcy court, as Stephanie Joyce, with Wyoming Public Radio recently reported.

“Nobody has had to pay a penny yet for this, out of the public, for this reclamation. Land reclaimed from coal mining is generally leased for seasonal grazing or agriculture.

The position that the agency is taking here is that the process is working, the way the process is supposed to work,” said Kyle Wendtland, Land Quality Administrator, with the Wyoming Department of Environmental Quality.

In coal mining communities the situation can be seen as a catch-22: If coal companies actually have to put up the money for reclamation in place of self bonds, it could hurt their already dismal balance sheets, sending them into bankruptcy. Alpha Natural Resources said as much in financial documents not long before it filed for bankruptcy, “Failure to…maintain self-bonding status … could adversely affect our ability to mine and lease coal.”

“It is a tough topic for everybody in the community,” explained Karla Okansen, whose husband is a retired coal miner, “On one hand you want to see them do what’s right and on the other hand you know you understand that your friend and neighbors may still be going to work.”

The situation is likely to get worse. Two of the nation’s biggest coal companies, Arch Coal and Peabody Energy, together have just over $1.8 billion in coal mine reclamation self-bonding. Arch announced earlier this week that it could declare bankruptcy in the “near term.” According to credit ratings agency Fitch Ratings, Peabody has a “reasonable likelihood of default.”

This story was produced in collaboration with High Country News. NPR aired a version of it on February 29th.