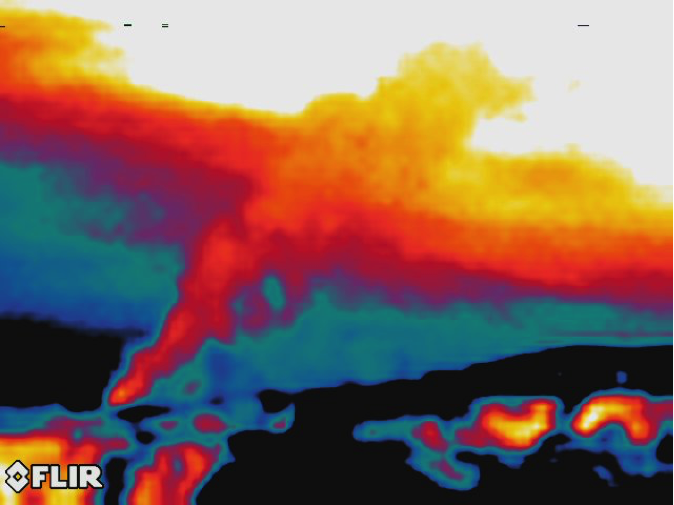 Infrared images like this one taken Dec. 9, are making it possible to see the massive escape of methane and other gases from the Aliso Canyon Gas Storage Field in Los Angeles County. Credit: EDF.

On a screen in a southern California banquet room earlier this week, about 300 people saw for the first time something they had only been able to smell for the last six weeks: vapors from an out of control natural gas injection well about a mile from their homes in the Los Angeles County community of Porter Ranch. The site has been spilling the powerful greenhouse gas methane at the unprecedented rate of about 100,000 pounds per hour since Oct. 23.

The images came from a video shot with an infrared or FLIR camera and were shown by attorneys who convened the meeting. There was an intake of breath as the camera panned to rooftops that seemed to sit in a cloud of bright pink gas.

The video is time-stamped and shows latitude and longitude, suggesting it was shot along Tampa Avenue in Porter Ranch. The R. Rex Parris Law Firm of Lancaster filed a class action lawsuit in Los Angeles Superior Court on behalf of several Porter Ranch residents Dec. 2. But barely a week later, likening the environmental disaster to “a West Coast BP” – the 2010 sea floor oil well blowout in the Gulf of Mexico – the firm announced it was adding three more well known environmental litigation firms.

More than 1200 people have left their homes in Porter Ranch due to illness and concern over the air near the site. But concerns go well beyond the area because methane is a climate-changing gas many times more potent over the short term than carbon dioxide.

The additional attorneys are Robert F. Kennedy Jr., Brian Panish of Panish Shea & Boyle, and Morgan & Morgan, who represented plaintiffs in the BP case. The video provided by the attorneys is not the only new visualization of the ongoing methane leak. A coalition of environmental groups, Earthworks, Food & Water Watch and Save Porter Ranch, also shot infrared video.

“That is really a visual depiction of what we have been describing,” said Gillian Wright, vice president for customer services at Southern California Gas Co., which owns the Aliso Canyon Gas Storage site where the well has failed. “We do have a methane leak, a significant leak, at our facility.”

Wright said she saw gas billowing upward and dissipating in the air.

Susan Gorman Chang, a Porter Ranch resident now living in corporate housing, saw something else when she viewed the black and white video. “You can see the cloud coming down from the mountains and onto the residences. It is really disturbing.”

Southern California Gas, a subsidiary of San Diego-based Sempra Energy, is paying for the relocation of residents until the well is killed, which it estimates will take three or four months. It was ordered to do so by the Los Angeles County Department of Public Health. Hundreds more residents are waiting to move, according to community groups.

This story comes to us from reporter Ingrid Lobet with inewsource. inewsource is an independent non-profit focused on investigative, data-driven journalism. Note: Inside Energy will have a full report for radio and web on this story in coming days.