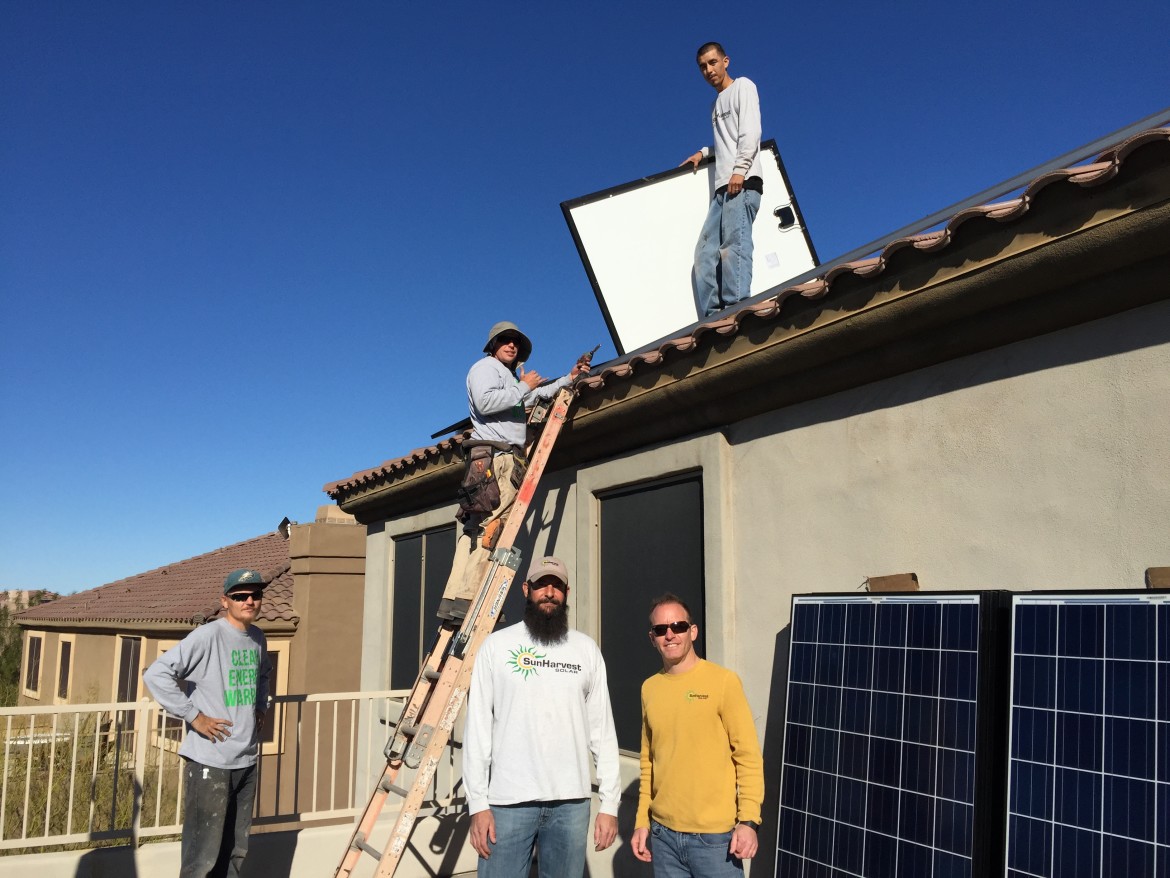 A crew from the Arizona-based solar installer, SunHarvest Solar, put up solar panels on a residence in Scottsdale, Arizona.

It may be lights out for the solar industry in Nevada. That state is hemorrhaging jobs after a controversial decision in December to raise rates for customers with rooftop solar panels. The move has jarred the solar industry nationwide, especially in other southwestern states like Arizona.

“What happened in Las Vegas is really kind of scary because if we don’t have foresight as an industry,” he predicted, then the same could happen in Arizona.

Nationally, the residential solar market is booming, with a 66 percent increase between 2014 and 2015. Nevada was one of the standard bearers, until recently.

Hundreds of solar workers and customers converged upon the offices of Nevada regulators last month, with chants of: “Bring back solar! Bring back solar! Bring back jobs! Bring back jobs!” They were protesting abrupt changes to the rate structure for solar panels hooked up to the grid. In December, the utility commission raised fees and voted to phase out what’s called net-metering, which reimburses customers at retail rates for excess power they produce. What’s more, those changes apply not only to new customers but existing ones.

“I am not hurting anyone,” said homeowner Donna Waldron as she went over her bill during a recent public hearing. She said she lives on a fixed income and went solar to save money after her husband died.

Public outrage eventually led Nevada to scale back its decision slightly, but many companies have closed shop or left the state along with hundreds of jobs.

“It’s no doubt created, you know, some shockwaves,” said Marlene Motyka, the U.S. alternative energy leader for Deloitte Advisory. She called this “growing pains” for the solar industry.

“Their business models for solar providers often operate on thin margins, so they’re trying to work on being as economic and get a return and offer value to their customers,” she said.

Despite this turmoil, Motyka said investors are not running away. For one, Congress recently extended the prized solar investment tax credit. Plus technology costs continue to fall and battery storage is evolving rapidly.

Still, the fallout in Nevada has injected some uncertainty into the market, said SunHarvest’s Brandon Cheshire.

Cheshire is nervous because Arizona has also become a hub of solar with the third most installed capacity in the country. Like Nevada and elsewhere in the country, utilities are pushing back. “I’m not foolish to think that we are not taking on the most profitable, powerful industry that’s really ever survived. We’ve got a huge infrastructure that we’re trying to replace,” said Cheshire.

The dilemma for solar providers is they can’t replace the infrastructure yet. Solar is, by its very nature, intermittent. Solar customers draw from the grid when the sun isn’t shining.

Marc Romito is with Arizona Public Service—the state’s largest utility.  “We are at the tip of the spear in the United States,” he claimed.

Romito called the growth of rooftop solar in Arizona “explosive,” but out of sync with how people consume energy. “They get the credit for the solar they overproduced that went on to a system that is super saturated with excess generation.”

Solar ‘overproduces’ during the midday when it is churning out the most power, but that’s not when the utilities and their customers need it. Energy use peaks in the evening as people come home.

“When the solar is not producing, they have been allowed to bank the credit for their excess generation, however useful or useless it was,” said Romito.

According to many utilities, this amounts to a subsidy, which shifts the costs onto all the other ratepayers. That contention does not sit well with solar companies or their customers, who bought and leased expensive systems believing net-metering would save them money.

Harvey Bryan is a professor at Arizona State University and said the “solar wars,” here and across the country, have put utilities in a tough spot.

“There are so many things that what we call legacy industries tend to fight rather than try to incorporate into a new business model,” said Bryan. “And that will come back and hurt them.”

Bryan points to the telecom companies that fought cellular technology. But he still believes a compromise can be possible.

All of this will be put to the test soon in Arizona when Arizona Public Service and other utilities go in front of regulators like Doug Little this year, possibly to raise solar rates. But Little predicted nothing will going to change overnight: “One of the key core values in regulatory policy making is this concept of gradualism.”

Little is chair of the Arizona Corporation Commission and said he doesn’t want to send Arizona’s solar industry into a tailspin like what happened in Nevada.

“When you start doing things that make broad abrupt changes to the economic environment here, it’s not good for any of us,” said Little.

This isn’t hypothetical, either.

Last year, Arizona’s other major utility, the Salt River Project, or SRP, changed its rate structure and increased what solar customers were paying. As a result, new installations plummeted.

If a Nevada-like decision comes to the other utilities in the state, Brandon Cheshire said customers and the public begin to lose the benefits. The math for solar customers might just not make sense anymore:

“Then what incentive is there to invest in solar, unless it’s to quell your bleeding heart, right?” he asked.