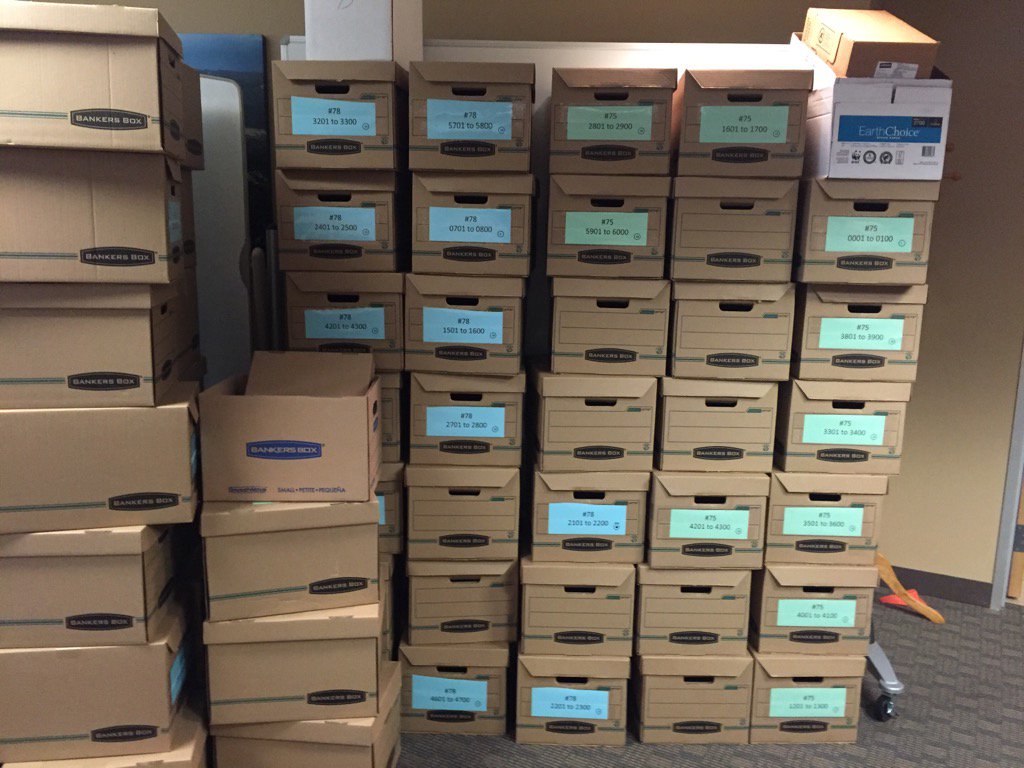 Lynn Bartels, spokeswoman for the Colorado Secretary of State's office, tweeted out this photo when backers of oil and gas ballot initiatives turned in their signatures. Lynn Bartels, spokeswoman for the Colorado Secretary of State’s office, tweeted out this photo, saying “Proponents of fracking measures turned in lots of boxes with very few petitions in them.”

So far, seven initiatives have been approved for Colorado’s November ballot. One wants to raise the minimum wage, another allows “death with dignity” for the terminally ill.  Still another approved initiative would make it far more difficult for new ballot measures to qualify for the ballot in years to come.

The Secretary of State is now sorting through the signatures for two more measures. They’re the last two to be considered and, taken together, they would seriously restrict oil and gas development in the state. Government workers are doing the tedious work  of sorting through boxes of petitions to determine if Initiatives 75 and 78 have the 98,482 signatures required to be placed on the ballot.

Inside Energy’s Leigh Paterson spoke with Ben Schler, with the Elections Division at the Colorado Department of State, to learn more about the process. Here are some highlights:

Groups Celebrate When They Drop Signatures Off

“Honestly, it can be a little chaotic. These folks have been working for months on collecting these signatures and because it takes so many boxes to turn in a petition, you need a lot of volunteers to bring your petitions in for you. You get all of those folks into one small room, there is a sense of accomplishment there because they’ve turned in their petitions. It often seems to be that it is at that moment that it’s time to start hooping and hollering.”

“It is a facility that is run by another government agency, the Department of Personnel and Administration. When you put the three different shifts together, they’re working around the clock. When it’s at its peak, about 130 folks are doing this stuff… Each petition has thousands of petition sections. Each section has multiple pages with multiple signatures on each page. So our folks at the very beginning are counting each section, counting each page, and then they’re counting each line on each page. And that’s how we get to that final number of whatever it is that those folks turned in…We don’t initially check all of the signatures. This group turned in, say, 180,000 signatures. We take the number and we do a five percent random sample of it. And then of that random sample, we check all of those signatures.”

Human Error Is Part Of The Process, So Is Double Checking

“It is absolutely the case that because humans are the ones that are staring at the page, because you have varying levels of ability with regard to being able to decipher bad handwriting, you are certainly going to see some errors. Our folks down in Pueblo have a fairly robust quality assurance process that we go through so that the managers, the folks who have a lot of experience in this process, are constantly checking the quality of work the folks are doing.”