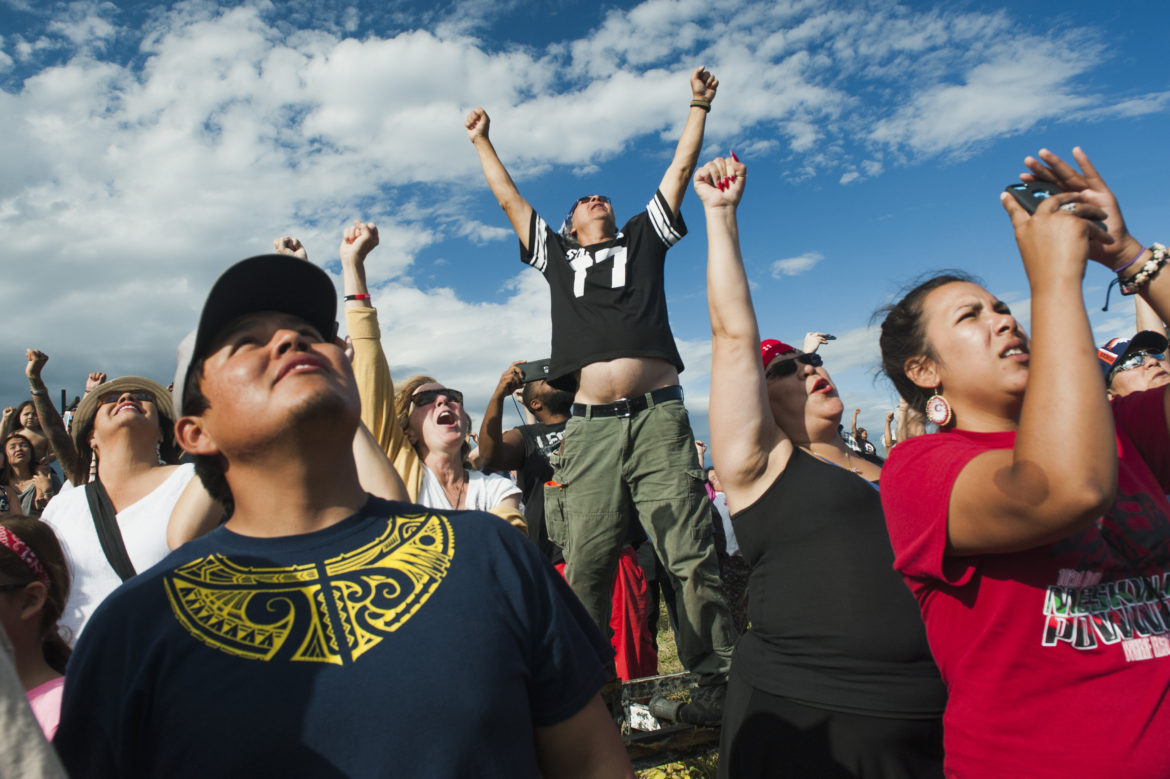 People raise their fists in the air in solidarity as a group of canoes arrives in a protest camp that sprang up to demonstrate against the Energy Transfer Partners’ Dakota Access oil pipeline near the Standing Rock Sioux Reservation in Cannon Ball, North Dakota. The canoe flotilla had representatives of tribes from the across the Pacific Northwest and navigated the Missouri River from Bismarck to Cannon Ball to show their support.

Hundreds of people gathered on the lawn outside the North Dakota Capitol in Bismarck Friday afternoon for what was supposed to be a protest over construction of the $3.7-billion Dakota Access pipeline.

Dozens of state troopers lined up on the lawn in riot helmets, prepared for the possibility of violence. But the mood was joyous. People danced and sang and chanted, celebrating a surprise victory.

Even Miss Indian World, Danielle Ta’Sheena Finn, made sure to come home for the event. Since earning the title at a powwow earlier this year, she’s been traveling the world speaking out on topics like suicide prevention and now, the pipeline.

“It doesn’t feel in any way like a protest,” said Finn, who’s a member of the Standing Rock Sioux Tribe.

Just minutes after a federal judge rejected her tribe’s request to halt construction on the 1,200-mile pipeline, the Obama administration stepped in. The Army Corps of Engineers said it would block construction of the pipeline on several key segments surrounding the Missouri River while the agency reviews its permitting decisions.

The announcement said tribes had raised important issues “regarding the Dakota Access pipeline specifically, and pipeline-related decision-making generally.” This fall, the administration will initiate government-to-government consultations with tribal leaders about the need for nationwide reforms to the permitting process for similar projects.

“It’s a win for all Indians, it’s a win for indigenous people,” Standing Rock Chairman Dave Archambault said in response to the government’s decision.

The proposed pipeline, being built by Texas-based Energy Transfer Partners, could transport more than 500,000 barrels of crude oil a day from the Bakken to Illinois. Its planned route passes just north of the Standing Rock reservation. The tribe filed an injunction to stop the pipeline on the grounds the Army Corps of Engineers failed to properly consult them during the permitting process.

Protesters say a break in the pipeline would contaminate the Standing Rock Sioux’s water supply, and that the pipeline’s route crosses sacred sites. Protesters clashed with private security for the pipeline last weekend when the company bulldozed through possible tribal burial grounds.

The issue has escalated into a national one in recent days, with protesters and media from across the country descending on both Bismarck and the site where the pipeline would cross the Missouri River near the reservation. Thousands of people from hundreds of tribes are now gathered there.

“I don’t think this is just a Standing Rock Sioux Tribe issue,” said Joseph Moose, a member of three California tribes who traveled to join the protest. “I think this is an issue of everybody that uses water.”

But like many others celebrating the government’s announcement, Moose said the victory was not clear-cut because of the judge’s decision. The federal government said construction will be halted while it reviews its original decisions on the pipeline, but the responsible agencies didn’t give a timeline for how long that might take, and the tribe is continuing its suit in court.

“The halting of the [entire] pipeline was the ultimate goal and that didn’t happen, so it just shows that there’s more to do,” Moose said.

Construction can continue on sections of the pipeline not immediately adjacent to the Missouri River. Energy Transfer Partners hasn’t made any statements about Friday’s developments.

Anti-pipeline momentum is continuing to build, reminiscent of the fight over the Keystone XL pipeline. Bernie Sanders is scheduled to appear at a rally Tuesday in Washington, D.C., and solidarity protests are expected around the country.

Kirsten Kelsch is married to a Standing Rock tribal member and organized Friday’s protest in Bismarck. She said this fight is far from over.

“I feel very positive that we are going to win,” Kelsch said. “My mom always taught me that good things come to people who wait. And we are patiently waiting.”