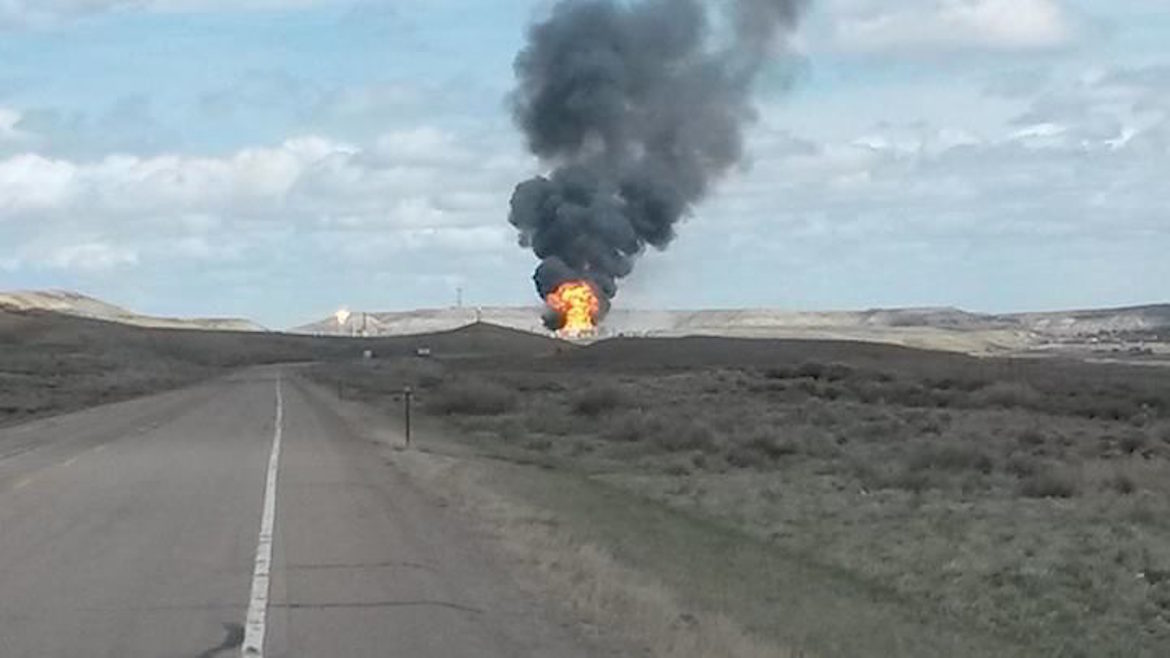 A 2014 explosion at the Williams Opal natural gas processing plant forced the evacuation of the town, and caused a spike in the price of natural gas.

In 2014, a massive explosion tore through the Williams natural gas processing plant in Opal. It forced the evacuation of the southwestern Wyoming town and caused a spike in the price of natural gas.

Wyoming’s Occupational Safety and Health Administration conducted an investigation in the aftermath and found a number of safety violations. But the agency never collected the corresponding fines and never released a final report about the investigation.

The lack of follow-up came to light because of media requests for the report after a worker died at the same plant in September.

John Cox became the director of the Department of Workforce Services a year after the 2014 explosion. Inside Energy’s Stephanie Joyce spoke with Cox about how this happened.

Stephanie May Joyce: It seems like a pretty big oversight to forget to send that fine. What are you doing to correct the failures of your fining process?

John Cox: First of all, in complete agreement that it is a serious oversight. I don’t think I could overstate our surprise when we discovered pursuant to the fatal tragedy that happened this month, our surprise that the process was not completed with Williams in 2014. A serious issue. From my perspective, as the new director of the agency, once I learned of that last week, I immediately called a meeting with John Ysebaert, who is the administrator, together with the supervisors from OSHA. I had a bunch of questions for them and then directed that they do a complete case file review of all open cases in OSHA. To me, the question is—is this an isolated incident or do we have a problem we need to solve in terms of how our process works? That’s to be discovered but that’s what we will be looking into.

Joyce: Is it typical that after such a major incident there is no follow-up?

Cox: Again, it’s hard for me to comment on that because a lot of this is new to me, in terms of what is typical and what is not. If it is typical, it will get corrected. The fact is that what needs to be typical, and I assume it is, because we have really committed professionals in the OSHA operation. My assumption is this is atypical. I’m going to find out if this is typical or if it is an aberration, but what does need to be typical is that there is quick, sequential, disciplined follow-up that ensures that abatement procedures or abatement agreements have been followed, and associated with that, that fines have been levied and collected.

Joyce: Just to make sure I’m understanding, not only that the fines are levied and collected but that there should be actual follow-up, you know, inspections and investigation, following a major incident.

Cox: That’s a good question. Clearly there is the need to verify that the abatement has taken place in any case, whether it’s an inspection where no harmful event has occurred or one where you have an ultimate tragedy, which occurred earlier this month.

Joyce: This did come up in the wake of this month’s death at the Williams plant.  Are you concerned about a pattern of safety lapses at this facility?

Cox: At this point, Stephanie, it too early for me to say whether there’s a continued pattern of safety lapses at the plant. That’s something we should be able to establish with the investigation we are conducting now. But preliminarily, it appears to us that there isn’t a relationship or resemblance between what occurred this month and what occurred in 2014.

Joyce: I do understand that OSHA is pretty narrowly focused on ‘was a particular standard violated?’ which I think sometimes obscures the larger question of ‘is there a culture of safety?’ or ‘is there enough attention paid to safety at a particular facility or by a particular company?’ Is that something you are able to address in an investigation, and if so, how do you go about doing that?

Cox: I think the simple answer is yes. And I’ll tell you from what I know. First of all, in an investigation like this, not only are the operating procedures and the process of the company under investigation, but also the safety and the condition of their equipment, their operating equipment, and what remedial measures might need to be taken by a company. In addition to that though, as those assessments are made during the investigation, which looks into not only their procedures and policies but whether or not they are following them, that certainly can give us a picture of whether or not the company is serious about what they are putting on paper.

Beyond that, moving downstream from that, so hypothetically, if you have a company being inspected, we identify some gaps in whether or not they’re actually walking out the procedures that they’ve got and living with those procedures, we can we can bring a variety of consultative services to the table to help that company and ensure that they follow their own policies. And there’s  consequences when they don’t.

Joyce: Thank you very much for taking the time.