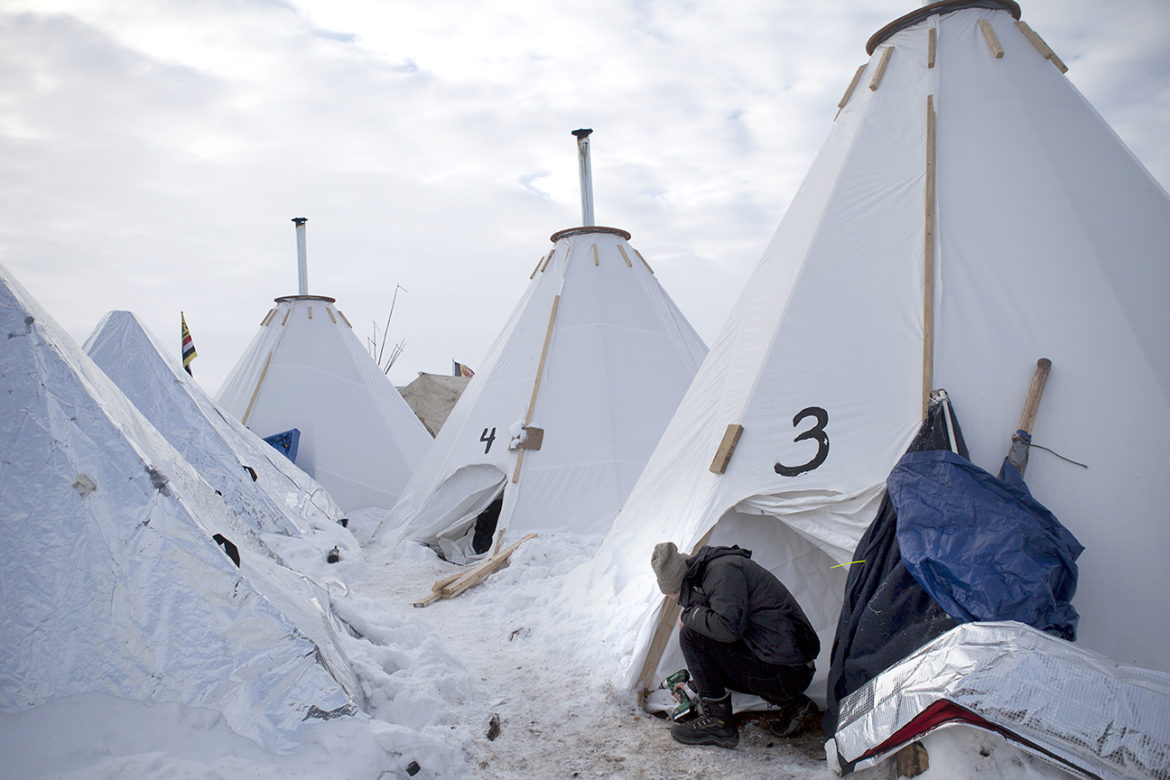 Jacob Brooks of Ann Arbor, MI works on one of the many "tarpees" erected in the camp, a winter dwelling developed by Paul Cheyok'ten Wagner. Jacob Brooks of Ann Arbor, MI works on one of the many “tarpees” erected in the camp, a winter dwelling developed by Paul Cheyok’ten Wagner.

Protesters have been camped out on federal land at the Dakota Access construction site in North Dakota for months, and now winter has arrived, dumping almost two feet of snow on the encampment the last week of November. The winter storm hit just before news that president-elect Donald Trump indicated he supports completion of the pipeline.

The two-day blizzard drove out some of the fairer-weather protesters, but most were geared up to stay. All are waiting to see what happens on December 5, the deadline set by the Army Corps of Engineers for protesters to leave federal land. Brad Kallio and Linus Yellowhorse patch roofing on one of the many winter dwellings being constructed at the Oceti Sakowin Camp.

At the camp this week, protesters were busy preparing for more winter weather.  Cusi Ballew wrapped insulation around a small wooden structure – more of a little box house – at the Oceti Sakowin Camp near the Standing Rock Reservation. “It’s essentially a glorified tent with a lot less chance caving in with snow,” explained Ballew.

Ballew is from Ohio, a member of the Pokagon Band of Potawatomi Indians. He said people in the encampment needed this kind of structure.  It wasn’t comfortable, he admitted, but said the protesters were not at the camp for comfort.

Ballew is one of a few thousand people committed to this ongoing protest against the Dakota Access Pipeline. They’re living in three camps along the banks of the Cannonball River. The Oceti Sakowin camp is the only one on federal land, where authorities say campers are illegally trespassing.

The day after Thanksgiving, the U.S. Army Corps of Engineers issued an emergency evacuation order for land it manages near the river. A few days later, North Dakota Governor Jack Dalrymple issued a similar order, warning that people trying to truck in supplies to the camp could be fined and the state will no longer provide emergency services.

“We will do our best to respond to emergencies,” said Dalyrmple in a press conference earlier in the week, “but in those conditions, we cannot guarantee a response.”

Early reports of the evacuation order described it as a blockade.  Dalrymple said blocking food and water into the camps would be a “humanitarian mistake.” But he still believes people should leave for their own safety. He said this emergency order was the same he would issue during an intense flood.

“We have not at any time ever contemplated going to the main camp and removing people from that area,” explained the North Dakota governor, “All we’re saying is we encourage you to find a better place to be, and we will continue to do that. We want the entire public to know, this is a not a safe place.”

Some people did leave camp after the storm and governor’s order, but more were digging in for a long winter. Paul Cheokoten Wagner designed and is building a new style of teepee for people preparing to stay and continue protesting the pipeline despite the pair of evacuation orders.

“They have been endeared with the name tarpee,” he said, “they’re kind of like unicorn teepees, because they only have a stovepipe sticking out the top.” One of many “tarpees” erected in the camp, a winter dwelling developed by Paul Cheyok’ten Wagner.

Wagner is from the Saanich tribe and lives in Washington state. He says he came up with the design after his first trip to Standing Rock in September. He started a Go Fund Me site and raised enough money to build 80. They come equipped with a stove, fire extinguisher and carbon monoxide detector.

Closer to the Missouri River, Kareen Lewis is living in Michigan Camp. She’s part of the Little River Band of Ottawa Indians and has been shuttling back and forth between the camp and her house in Michigan for a few months.

“I felt like I was so at home and empowered to be here,” she said.

Michigan Camp is a cluster of three Army green canvas sleeping tents, a mess hall, a teepee filled with supplies and a few tents half-buried in snow. Currently, about 50 people live here. Lewis thinks they can make it without grocery runs for about a month. Even though she’s living in the evacuation area, she says she has no plans to leave. “I don’t want to leave. i want to stay here and see what’s gonna happen,” she said.

Despite the orders to evacuate, more people are arriving every day, including a group of 2000 veterans who say they plan to act as human shields between protesters and the police.