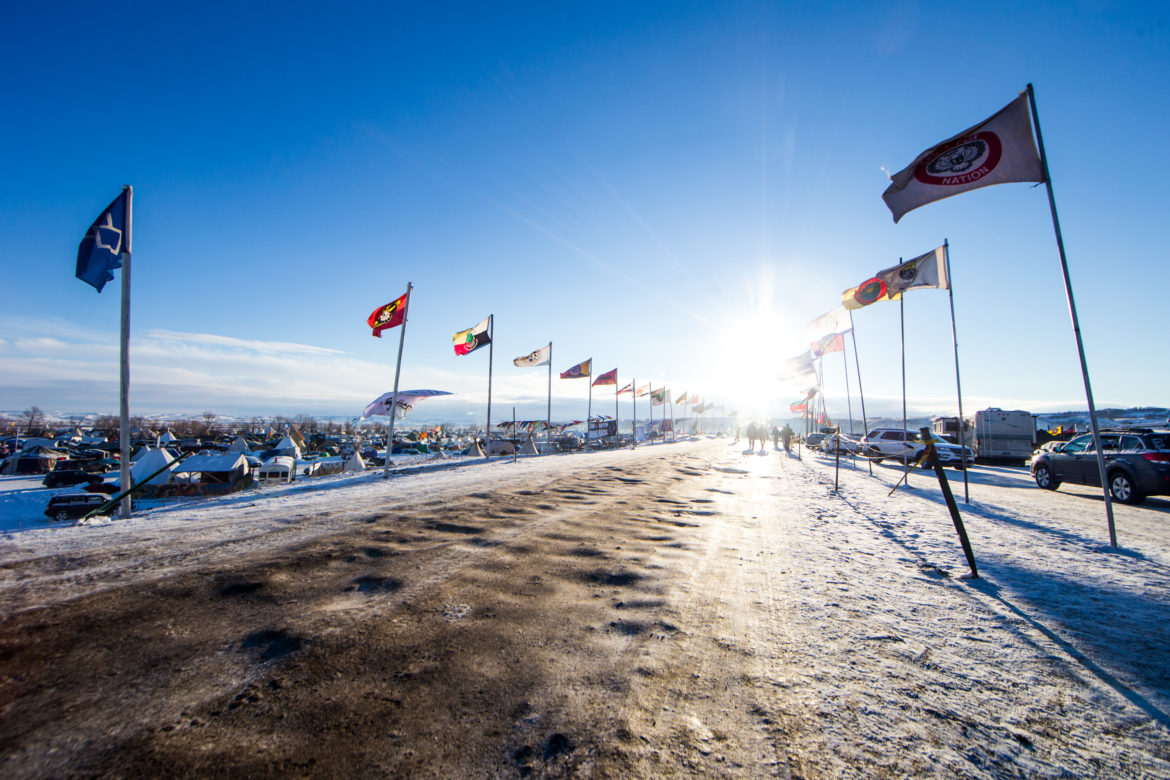 The winter sun shines down Flag Road from the east in the Oceti Sakowin camp where Dakota Access Pipeline protesters have settled in for the winter outside of Cannon Ball, North Dakota on Sunday, Dec. 4, 2016, the day the Army Corps denied an easement under the Missouri River.

What’s going on with that pipeline in North Dakota?

Momentum behind the Dakota Access pipeline protests has been building for months. The 1,200 mile-long pipeline project is controversial, involving many big-picture interests, issues, and plenty of misinformation.

As Inside Energy has covered developments on the ground in North Dakota and at protests around the country, you’ve been flooding us with questions and comments in-person, on social media, on our website, via text message – really great questions.

How likely are pipeline spills? Is there a threat to fresh drinking water?

The U.S. Army Corps of Engineers announced in early December that it will not grant an easement for the Dakota Access pipeline to run under the Missouri river north of the Standing Rock Sioux reservation.  Instead, the ACOE will carry out an environmental impact statement that investigates alternate routes. But the story is far from over, and this development leads to even more questions.

So we’re pulling together facts, data and context surrounding your most pressing DAPL questions together in one place, for clarity and easy access. We’re be adding more answers to this post as we complete them, so stay tuned, and keep the questions coming!

Longer answer: These are two very good, and very different, questions. Let’s start with the question about Indian land. If ‘Indian land’ refers to the Standing Rock Sioux reservation, then no, the pipeline would not cross the reservation – but it does come close.

At least some of the land in question was established as part of the Great Sioux Reservation by treaty in the mid 1800’s but was then taken away by the U.S. government decades later. In 1980, the Supreme Court said of that seizure, “A more ripe and rank case of dishonorable dealings will never, in all possibility, be found in our history.”

Dave Archambault, Chairman of the Standing Rock Sioux, explained: “I say ‘treaty lands’ because our lands were illegally taken from us. Not one president, not one congress that can say they were not taken illegally from us.  So because of that, we should still have say on whether or not infrastructure projects are going to impact our people our sacred places.”

That brings us to the issue of sacred sites. Under the National Historic Preservation Act (NHPA), the federal government is required to take into account the effect of their undertakings on historic properties, even if that land in question falls outside of reservation boundaries.

In court documents, the Standing Rock Sioux described their concerns:

“The Tribe’s traditional and ancestral territory extends well beyond the current Reservation’s exterior boundaries, encompassing lands that are subject of this action…The pipeline’s route passes through ancestral lands and areas of great cultural, religious, and spiritual significance to the Tribe… such work would destroy burial grounds, sacred sites, and historically significant areas within its path. These sites carry enormous cultural importance to the Tribe and its members.”

“In North Dakota, for example, the cultural surveys found 149 potentially eligible sites. The pipeline workspace and route was modified to avoid all 91 of these stone features and all but 9 of the other potentially eligible sites. By the time the company finally settled on a construction path, then, the pipeline route has been modified 140 times in North Dakota alone to avoid potential cultural resources.”

In denying the tribe’s motion, the judge wrote:

“[The Court] concludes that the Corps has likely complied with NHPA and that the Tribe has not shown it will suffer any injury that would be prevented by any injunction the court could issue.”

So why is there so much disagreement over the existence of sacred sites and how they are considered?

“The way you have to understand it, is you take your most deeply held religious belief, and you think about what it would mean to have that place affected in a bad way,” Troy Eid, a Denver-based attorney, practicing American Indian law, explained. “It would be akin to the Sistine Chapel, running infrastructure through it, that’s what we’re talking about in terms of the emotions involved.”

Short answer: Pipeline spills are low probability events. But when they do occur, they can be devastating.

Long answer: We know an average of 84 barrels of crude oil are spilled each day from pipelines in the U.S. But what does this mean in determining the risk factor? Different sides have different answers. Standing Rock Sioux Chairman Dave Archambault told Inside Energy:

It’s not if it will break, it’s a matter of when it will break.  And where it’s gonna break.  If it breaks under this river, it puts us at risk.  So we can say, don’t put it here, because we don’t want our water threatened.

Not so, says Kelcy Warren, CEO of the company building the pipeline, Energy Transfer Partners. In an interview with PBS Newshour, Warren was asked to respond to concerns about a potential leak:

So that’s just not going to happen. Number one, we’re not going to have a leak. I can’t promise that, of course, but that — no one would get on airplanes if they thought they were going to crash. And, number two, there is no way there would be any crude contaminate their water supply. They’re 70 miles downstream.

So, what is the risk of a leak? We can’t predict the future, but we can do some back-of-the-napkin estimates based on historical data. One way to estimate the risk of future spills is to look at data from the past. Inside Energy analyzed data from the Pipeline and Hazardous Materials Safety Administration (PHMSA) on pipeline infrastructure and spills from 2010 to the present to come up with average spill rates.

We’ve just thrown numbers at you. How do we interpret them? Several thousand barrels a year spilled sounds like a lot. But there’s another way of looking at it: More than 200 million barrels would travel through DAPL each year, when it is completed. So if these spill rates hold, more than 99.998% of the oil would arrive safely.

That statistic could feel meaningless if thousands of barrels of crude are spilled near your home or in your drinking water. In 2015, a ruptured pipeline leaked 758 barrels of crude oil into the Yellowstone River in Montana. According to the Environmental Protection Agency (EPA), in the days following the spill, chemical contaminants were found in the town of Glendive’s drinking water and oil was detected in fish.

“Everyone has to judge risk on their own. We try not to tell people whether a pipeline is safe or not because safe to one person might be unsafe to another.”

Hungry for more spill stats? We’ve broken down some of the numbers in this video:

And here are some quick crude oil pipeline spills stats, based on PHMSA data going back to 2010:

We’ve got so many more numbers in our nerd notes…check them out.

As the Army Corps of Engineers assesses alternate routes for the Dakota Access pipeline, the risk of spills will be an important consideration.

We’ll be adding more information to this post as the story develops, so keep the questions coming. You can submit a question in the widget at the bottom of this post, on Twitter @InsideEnergyNow, or by emailing us at ask@insideenergy.org.