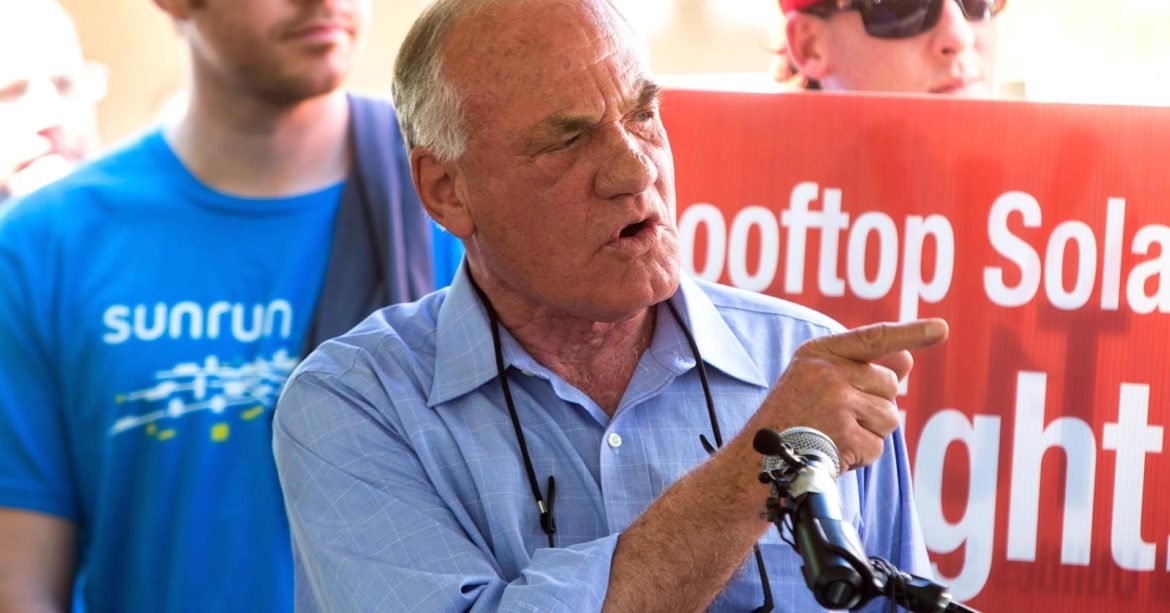 Former Congressman Barry Goldwater Jr. is the chair of the advocacy group Tell Utilities Solar won't be Killed (TUSK) and has been pushing to preserve pro-rooftop solar policies in places like Arizona.

Take a walk around Charlie Miller’s neighborhood and it quickly becomes a solar sales pitch.

“Mine’s had it for five and a half years. That one is brand new. Down the street there are about four more,” Miller points from one southwest style model home to the next, the rooftops lined with solar arrays.

This is only one block in Pebble Creek – a retirement community west of Phoenix with over 4,000 homes. Twenty-five percent of those homes have rooftop solar, and new ones are coming online almost as fast as the homes are being built, says Miller. Charlie Miller stands in front of his home in the retirement community of Pebble Creek, west of Phoenix. Miller is one of the many republicans who have embraced solar in Arizona.

After decades in the paint business, Miller moved to Arizona as rooftop solar was taking off in the mid-2000s. Now he works for a local installer.

Plenty of homeowners and sunshine, plus high summer bills, all explain why solar makes so much sense in Pebble Creek – a solidly Republican area.

“When you go into these houses, you don’t need to talk anyone into solar, and we have as many conservatives in here or more. They’re ready for solar,” he said.

It’s an uncertain time for Republicans who have embraced clean energy. President-elect Donald Trump appears to have fossil fuels on his mind as he makes his cabinet picks: The former Governor of Texas at the Department of Energy, an ExxonMobil CEO running the State Department, and Oklahoma’s attorney general for the Environmental Protection Agency.

But do renewables fit into this conservative agenda?

Solar fans like Miller are adamant: “It’s a no brainer.”

Miller spends his time going to republican clubs, spreading the doctrine of solar for a local advocacy group called the Conservative Alliance for Solar Energy (CASE). It’s a doctrine shared by some prominent Republicans in the West, too, such as former California Congressman Barry Goldwater Jr.

“Conservatives should be on top of this because of freedom of choice: choice in education; choice in healthcare; this is just another choice of where you get your energy from,” Goldwater said, who has seen the growth of renewables since his time in Congress during the 70s.

Goldwater has been a standard bearer for the rooftop solar industry as it has fought to keep pro-solar policies in place across the country. He chairs an advocacy group called Tell Utilities Solar Won’t Be Killed (TUSK) and believes his party – and that of his father’s – hasn’t done enough for solar in Arizona.

“I don’t know why some Republicans are coming out against this, except that utilities swing a big hammer and have a great deal of influence,” he said, referencing an effort by some state GOP lawmakers here to block a pro-solar ballot initiative this year.
He calls the business plan of regulated utilities “a dinosaur” that hopes to stifle competition, rather than innovate. Solar advocates like Goldwater contend that utilities are not considering all the benefits of this clean energy, like the need for fewer power plants or transmission lines, as well as less carbon emissions.

Of course, utilities don’t see it that way. Distributed generation like rooftop solar reduces customers’ reliance on the grid, at least during the day. That lowers bills, as does net-metering, which reimburses customers at retail rates for their extra power.

Arizona’s largest utility, Arizona Public Service (APS), has proposed paying solar customers less for their energy. In its current rate case, the utility reports that the rapid penetration of solar – more than 40,000 in its service territory so far – has already caused a one billion dollar cost shift onto all its other customers.

That dynamic makes solar socially and economically unjust, according to Paul Walker with ConservAmerica – a conservative conservation group.

“As the wealthy homes move off the system, they are leaving more and more of the fixed costs to the people who couldn’t afford to get solar in the first place,” Walker said.

This creates a reverse “Robin Hood effect,” and Walker says utilities are trying to correct the problem, not kill clean energy.

“We see that in a lot of the PR with this talk about a ‘war on solar.’ I just haven’t ever seen anything that really shows Arizona utilities are opposed to solar,” he said.

Walker points to a new APS program that he dubs “blue collar solar.” Instead of customers investing in a costly system, the utility owns the panels and pays a fixed monthly rate for the roof space. About 1,600 customers are enrolled in the pilot program.

“In most states, including here in Arizona, customers are paying a surcharge to fuel rooftop solar. They should also have a chance. That’s where this utility model works best,” Walker said.

The question of subsidies and cost-shifts can divide conservatives like Walker and those who would challenge the monopoly model like the Green Tea Coalition – a pro-solar movement that advocates for free market principles.

“The common reason for going solar is really economics, and that cuts across all political persuasions” James Tong, CEO of the California-based Advanced Grid Consulting, said. “It’s not necessarily the tree hugger who actually goes solar.”

Tong has studied the demographics of solar customers and says affluent households are often the first adopters of new technology, but that is already changing as the costs come down.

“Slowly it’s getting into communities with more modest incomes, closer to the medium income of about $50,000 for a typical household,” Tong said.

Political persuasion isn’t necessarily a good predictor of whether or not someone goes solar, but the motivations can differ.

“They both may see solar as a means to freedom from a monopoly,” he said. “But the conservatives see it more as a way to protect their individual freedom. Whereas the liberal might see it as… protecting the environment, which is more of a collective freedom.”

Attitudes on the right seem to be changing. Polling shows more republicans are worried about climate change in recent years. And seventy five percent of Trump voters would like to increase renewable energy.

“That doesn’t fit with what most people think is true about conservatives or about Trump supporters, but we’re seeing that more and more and more,” Walker of ConservAmerica said. He thinks the “orthodoxy” that the right doesn’t care about climate issues is changing.

Even under a Trump administration, experts believe the market for renewables will continue to grow because costs have come down so much.

“It’s a good investment, but it’s also good for the earth,” solar enthusiast Charlie Miller said. “We are making energy here with no emissions.”

As state regulators in red, sunny states like Arizona consider tacking on new fees for rooftop solar, republicans like Miller will be making their case for more energy choices.