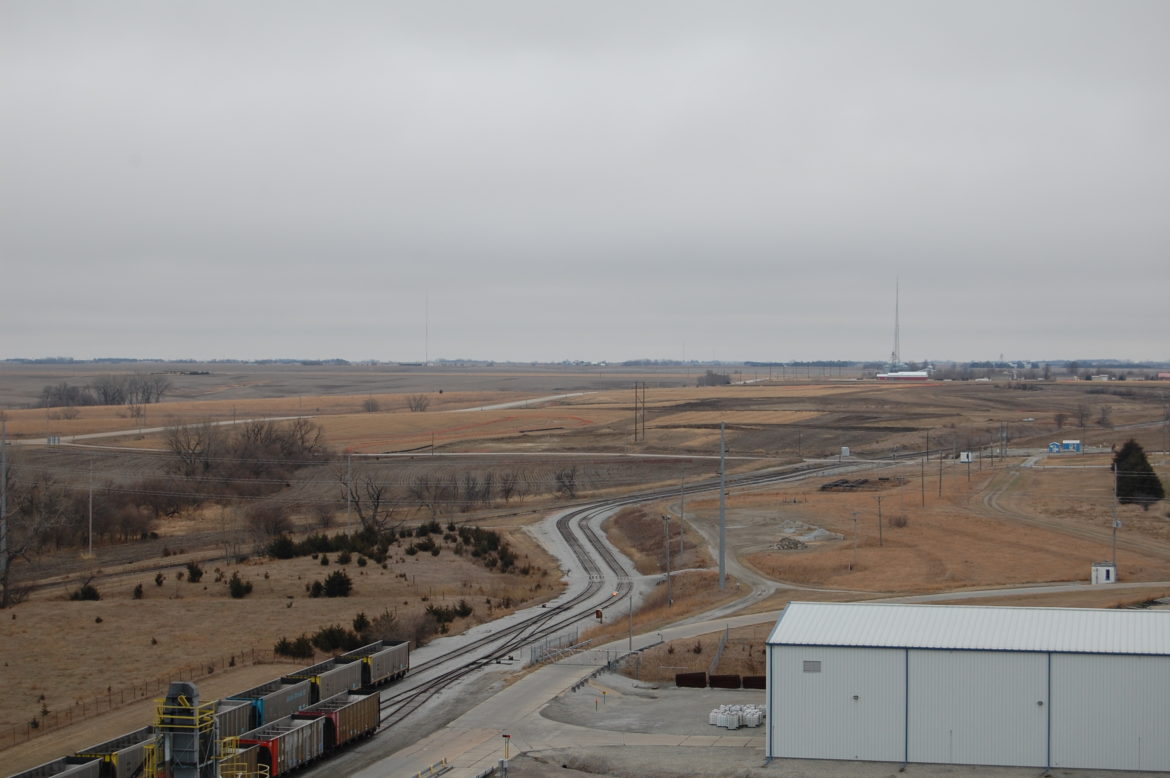 The view to the south from Sheldon Station. The dirt plot is where Monolith will build their carbon black plant, with easy access to the railroad and power plant.

More than half of Nebraska’s electricity comes from coal-fired power plants. Now, a partnership between a Silicon Valley startup and Nebraska’s largest utility aims to replace at least some of that coal with a new fuel source that will cut emissions while creating new jobs.

The Sheldon Station power plant hums day and night near the small town of Hallam, about 25 miles south of Lincoln. In dim yellow light on the ninth floor, plant manager Chris Cerveny opens a narrow door to reveal a long tunnel.

“This conveyor goes all the way down to the ground level, and that’s where we bring coal into the plant twice a day,” he said. Sheldon Station Plant Manager Chris Cerveny shows the conveyor where coal is brought into the plant twice a day.

Sheldon Station’s two boilers burn that coal to create steam, which powers a turbine to generate electricity. But in a few years, that will change.

“We like to refer to this as the new chapter in Sheldon’s history, and it’s the hydrogen chapter,” said John Swanson, NPPD’s generation strategy manager.

“And we’ve looked under a lot of rocks and not found anything near this attractive in the past,” he said.

In a few years, one of Sheldon Station’s coal-fired units will be converted to burn hydrogen gas—cutting carbon emissions from that unit nearly down to zero. The source of that hydrogen will be a new $50 million manufacturing plant built by a California-based startup called Monolith Materials.

Most carbon black is made from heavy petroleum. Hanson and his partner, both

Stanford-educated mechanical engineers, developed a new method to make it from natural gas.

They use electricity to split apart the atoms of hydrogen and carbon—keeping the carbon out of the atmosphere.

“So the emissions from our process are roughly 90 percent lower than the conventional way of making these products,” Hanson said.

Monolith will give that hydrogen by-product to NPPD’s Sheldon Station, believed to be the first major power plant in the country combusting hydrogen to produce electricity.

“The reason we don’t have more hydrogen burning plants, [is because] hydrogen is considered somewhat of an exotic fuel,” said NPPD project engineer John Meacham. “It has, to this point, been very difficult to obtain in quantities needed to operate a power plant.” Monolith will generate enough hydrogen that the Sheldon Station power plant can continue to produce the same amount of power it does now.

To produce that much hydrogen, Monolith’s process requires a lot of natural gas, and a lot of electricity. Once the factory is up and running, Monolith will become the largest electric consumer in Nebraska, using about as much electricity as the city of Lincoln. Around a third of that electricity is generated by burning fossil fuels. Carbon-free sources—nuclear, wind and hydro—provide most of the rest.

“They need a lot of electricity to crack those molecules. NPPD will sell them electricity, we will then buy that by-product hydrogen back,” Meacham said.

Because the hydrogen is derived from natural gas, it’s not considered renewable energy. But NPPD estimates that the project will reduce their total CO2 emissions by about a million tons a year.

Monolith broke ground last fall, and estimates their whole plant will be up and running by 2020 or 2021. Hanson said they’ll hire between 100 and 125 full-time employees at competitive salaries. He said they considered numerous factors in deciding where to build their first commercial plant.

“Things like infrastructure, availability of natural gas, of electricity, availability of rail. We also looked at cost of living and labor force, and what partnerships we could develop in the states.” Hanson said Nebraska’s cheap, stable electric rates and the public power partnerships is what ultimately led them here.

John Swanson, NPPD’s generation strategy manager, is already talking about the possibilities of expanding to other coal plants in the state.

“We are doing our best to convince Monolith to make Nebraska the carbon black capitol of the world,” he said. So hydrogen could take the place of a little more coal in Nebraska’s energy mix in the future.