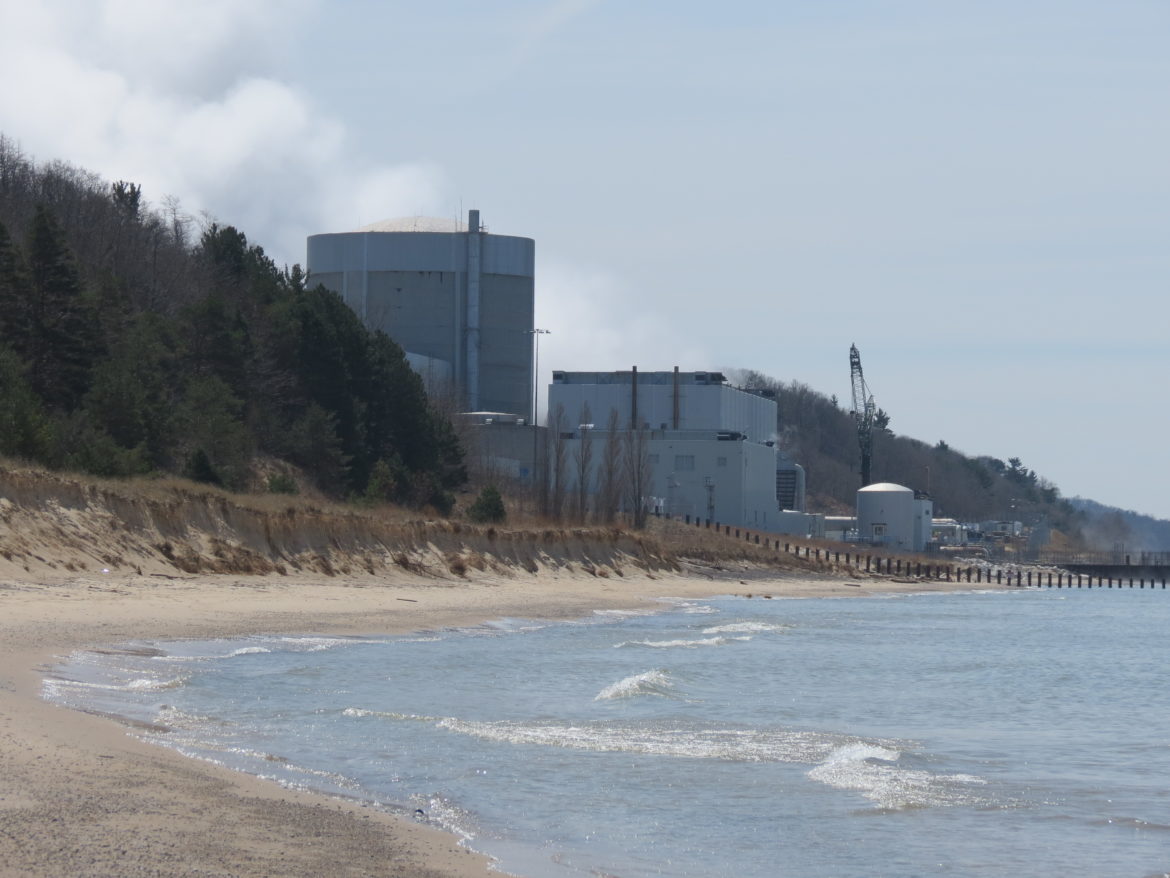 Palisades Nuclear Plant sits on the shore of Lake Michigan near Covert, Mich.

Great Lakes beaches have always been popular for tourists. But in the 1970s and 80s, they were also prime real estate for nuclear power plants because there was lots of water to cool the reactors. Now there are nine nuclear plants on the lakes – but cheaper energy sources are forcing some to shut down.

Nuclear power produces one fifth of the electricity in this country. It’s a carbon emissions free source of energy, but the industry is in trouble – aging reactors, high overhead costs and cheap natural gas are threatening to shutdown more and more reactors. And that’s not even considering the ongoing problems of what to do with nuclear waste.

Palisades Nuclear Power Plant is one of the nuclear plants currently threatened with shut down. It’s located in Covert, Mich., on the southern shore of Lake Michigan. Rosemary Thurber lives about five miles from there, and when she found out Palisades plans to close next year, she was relieved. The 45-year-old plant is one of the oldest in the country and has had several emergency shut downs.

But the closure worries many people in the area, including Mike Neiss. He worked for Palisades for about five years in the 80s.

“It’s just a very sad thing and I think it’s not only going to affect us economically but socially the town will change as well,” he said. “Since it’s going to be pretty much summer home owners and summer rentals. And we’re going to miss that neighborhood and that community feel.”

Shutdowns have been triggered by changes in the energy industry. Gene Grecheck of the American Nuclear Society, a group made up of workers in the nuclear industry, says natural gas prices are at rock bottom right now. And unlike energy sources like wind and solar, the nuclear industry doesn’t get as many federal subsidies.

“They’ve just reduced the price of electricity to the point that the operators of nuclear power plants find it very difficult to compete,” Grecheck said. An eighth grade math classes at Covert Public Schools. The district has many low-income, minority students and has outperformed many districts in the state like it.

When a nuclear plant shuts down, it can leave a big hole in a community. About half of the funding for Covert Public Schools comes from taxes on Palisades Nuclear Plant. Superintendent Bobbi Morehead says those dollars make a difference. Most school districts set aside five percent of the money left over at end of a budget year as a kind of rainy day fund. Right now Covert Schools sets aside 65 percent.

“The contributions they make to the community is soccer coaches, is baseball coaches, is people on the school board. Yes, those are the type of people that we could lose and that’s going to be a difficult void to fill,” Cultra said.

But there will be lingering reminders of Palisades after it closes. The corporate owner will have to tear down the buildings and clean up the site. That can take up to 60 years.

“The job is cleaning up radioactive contamination of the environment that has built up for years and decades. This is very dangerous and hazardous contamination,” says Kevin Kamps of Beyond Nuclear,  a group that wants to see these plants shut down.

Once the cleanup is done, all that will be left are large, steel cylinders filled with radioactive waste. They’ll stay there until the government builds a permanent storage facility for spent nuclear fuel. That’s a troubling legacy for area residents like Neiss. Palisades stores nuclear waste in these dry casks on the plant site, close to Lake Michigan.

“I’m sure it’s as safe as they can possibly make it,” Neiss said. “But to know that it’s sitting there on the beach is not a comforting thing.”

The local utility still has to end its agreement with the company that owns Palisades. If that isn’t approved by the Michigan Public Service Commission, the company says it will “re-evaluate its plans.”