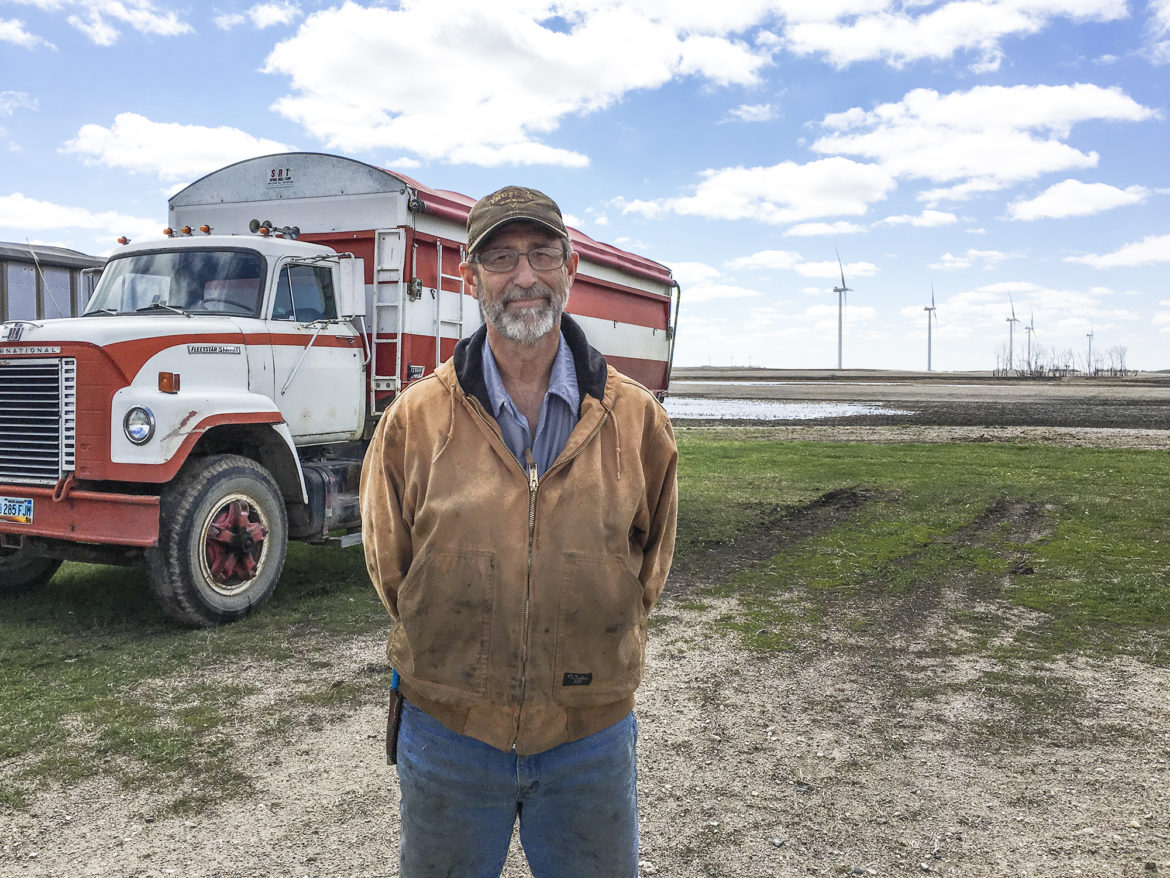 Steven Somsen’s farm has looked the same his entire life — it’s flat, with wheat and soybeans that will soon grow as far as the eye can see.

“Those are the closest ones to us, but they’re not our towers,” he said, pointing to several nearby wind turbines. “That’s the neighbors’. Ours are way, way off in there.”

One hundred wind turbines dot the farmland around his rural community of Courtenay in eastern North Dakota. Somsen has three on his land.

“It’s something different to look at,” he said. “Some of (the farmers) say they don’t like them, the other ones say it’s fine. Don’t bother me none.”

The windy Great Plains are prime territory for these giant spinning white towers. Over the last decade, two dozen wind farms went up in North Dakota. They now produce more than 20 percent of the state’s electricity, up from just 2 percent a decade ago, according to the Energy Information Administration.

The growth in wind power across America’s heartland is cause for concern for new Energy Secretary Rick Perry, who last month ordered a study of the electric grid. He wants to see if policies favoring renewables threaten the grid’s reliability, as wind, solar and gas compete with coal.

Ten years ago, lignite produced 90 percent of the state’s power, according to the EIA. Today, it’s down to 71 percent. The tension between wind and coal played out this spring in the Legislature. Sen. Dwight Cook, R-Mandan, proposed halting the development of new wind farms for two years, though that proposal ultimately failed.

“I think the real reason for the moratorium from my point was to get people’s attention,” he said.

He said he wants to wake people up to address the problem of grid reliability.

“Clean is great, but we’ve still got to have reliability,” he said. “We can’t let go of that because without reliable electricity, we’re in the dark.”

For decades, reliable electricity has meant coal, which provides a constant stream of power.

But even in North Dakota, that’s changing. There are many reasons. For one? Location.

“We are located right in the heart of the best wind resources, so let’s utilize that,” said Mark Nisbet, principal manager with Xcel Energy in North Dakota.

Xcel, based in the Midwest, provides more wind generation than any other utility in the country.

Other factors favoring wind include federal tax credits and state policies mandating renewable energy. Yet the real driver is the fact utilities are always looking for the lowest-cost option for consumers. Right now, that’s wind and abundant natural gas. Jayme Orrack is operations manager at the Courtenay Wind Farm.

Back in Courtenay at the site of Xcel’s new wind farm, Jayme Orrack demonstrates another advantage of wind. The operations manager presses a few buttons on a control panel inside one of the turbines and immediately, the blades start to move.

“It takes about a minute and a half for it to come online,” he said. “It has to stay at a sustained 1000 rpm in the generator before it’ll actually kick on and start generating power.”

Unlike a coal plant, wind can fire up really quickly to meet the demand for electricity. But when the wind dies down, it’s up to grid operators to back it up.

“Ultimately we need resources that can quickly ramp up as load picks up, as people start using electricity,” said Renuka Chatterjee, executive director of systems operations for the Midcontinent Independent System Operator.

MISO runs the grid in the Midwest. In the past decade, wind capacity in its region has grown from 1,000 megawatts to over 16,000.

Each time a utility builds a new generator — whether wind or gas or coal — MISO requires a study and upgrades to the transmission system to ensure reliability. Algorithms pinpoint which generators need to be running so supply always matches demand.

The region is increasingly relying on natural gas peaking plants to back up wind.

Chatterjee said utilities are also getting savvy about where they put up wind farms, spacing them out over a geographic region so that as the wind shifts, one wind farm can power up as another powers down.

It’s not about how much wind we can absorb, but what else comes with it, she said. It’s a balancing act that’s grown increasingly complex as our energy mix changes.