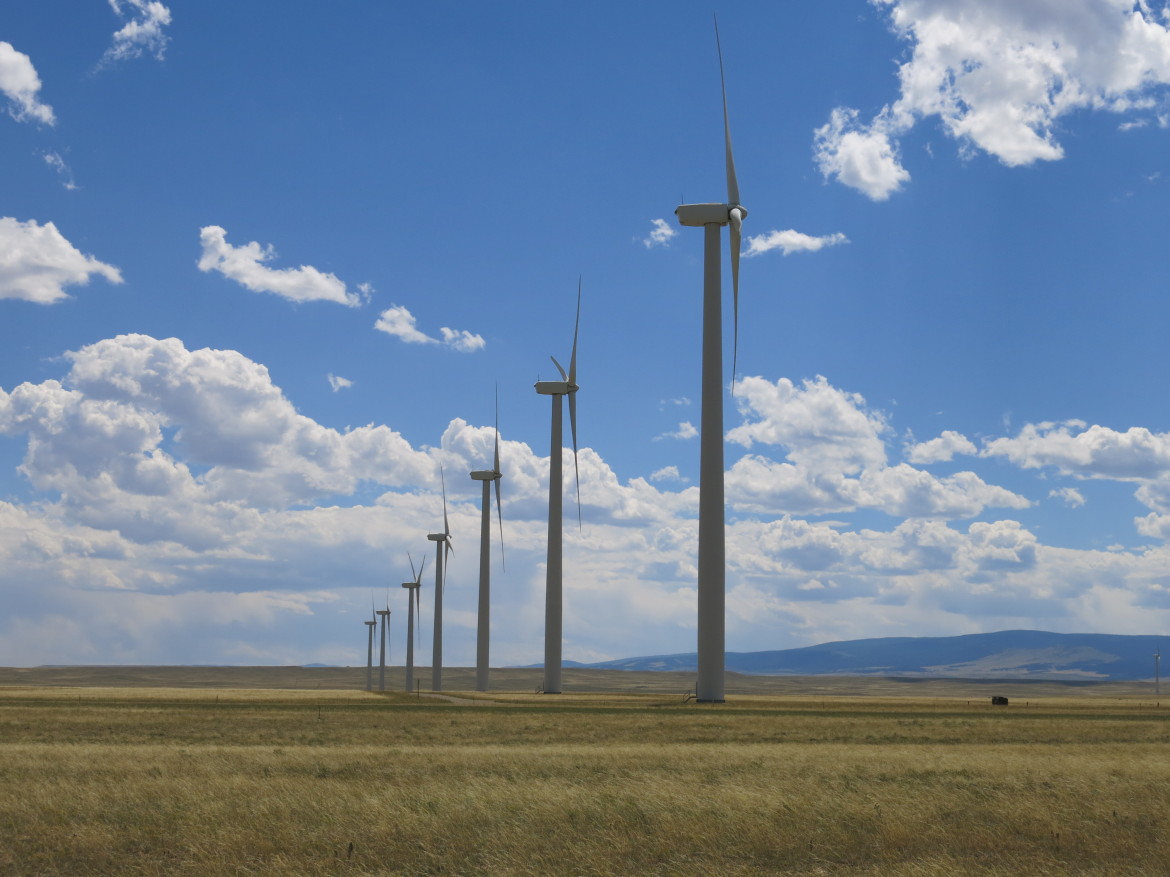 The entrance to the community center in Rawlins, Wyo. smells like an old musty, floral perfume. The smell doesn’t match the view: several burly men are lined up to fill out name tags and sign in. Younger men mill around, waiting on their fathers and grandfathers. A few women dot the crowd.

About 100 people have shown up to hear about free training to be a wind turbine technician.

Halligan’s company is a subsidiary of the Chinese Goldwind company: one of the largest turbine manufacturers in the world. It’s just starting out in the state, and Halligan has said the company wants to foster future local workers and provide opportunities to the people of Wyoming.

“We’re going to need people who are trained and qualified to operate the equipment, to operate safely,” he said. “People that may have skills already from working in other industries where they’ve had to work in situations where there’s safety or mechanical or electrical skills required.” He was talking about industries like construction, coal mining or oil drilling. His company held three meetings across the state this month to try and stir up interest in the free 2-week training, planned for fall of 2017.

There were lots of ex-fossil fuel workers at these meetings who lost their jobs during the recent busts. Others just wanted more work security, like mechanic William Cardenas.

“It seems like it would be a perfect opportunity,” he said. “With the oil and gas field, it goes up and down, and there’s nothing stable. But it seems like this would be a good opportunity and a good experience.”

Wyoming is the country’s largest coal producer, but presenters discussed how coal’s future is looking dim, largely thanks to cheap natural gas and energy efficiencies. Rob Godby says renewables are also getting more competitive. He’s director of the Center for Energy Economics & Public Policy at the University of Wyoming. He sees wind growing – fast.

“The easiest thing to compare this to is to computers. If you think about PCs 10 years ago and what they could do, for the same price now you can get so much more,” he said.

Godby told the crowd that wind prices had come down so far, they beat out gas or coal when it came to building new power plants.

“This is the cheapest form of generation to build,” he said.

The thing is, workers who choose to participate in this free training would still have to be retrained when they’re hired. But, as trainer Bryan Boatright explained, this 2 week course would give them an edge.

“What is it?” he asked, stomping the ground. “Foot in the door.”

This could also be Goldwind’s foot in the door to Wyoming. The company used to be the number one turbine manufacturer in the world, but last year lost out to Vestas of Denmark and U.S.-based General Electric. Up until recently, Goldwind’s been mostly focused on Asia.

But, GE and Vestas already have established positions in the U.S and in Wyoming.  GE has supplied hundreds of turbines to wind farms already operating here. Vestas has turbines here, too.  And both are in the running to supply more turbines to Wyoming’s 1,000-turbine ChokeCherry project: the largest planned wind farm in the nation.

Willey worked in wind for 15 years. He says Goldwind’s turbine types are proven and reliable, which may help them in the long-term. For now, he sees Goldwinds’ free training as a good move.

“This is a smart way to spend money. It helps people. It introduces them to the technology and to Goldwind as a company, and it’ll help the region.”

Goldwind now has an agreement to supply over 700 turbines for the second big wind farm going up in Wyoming, and they plan on expanding this free training program to Texas as well.  As Willey puts it, for Goldwind, this training is part of a much bigger play.

And for now, it seems to be working.  Take 60 year old Michael Abeyta. He likes the idea of long term employment as a wind tech.

“You give me the training and I’ll work for you,” he said.

Abeyta is unemployed but starts work soon constructing the Chokecherry wind farm. He said he could get the training this fall, take a wind job elsewhere, and return when Goldwind’s turbines are up and running.

“I can always come back and these ones will already be built and they’ll be needing techs,” he said.

Once the state’s major projects get underway, Goldwind and it’s competitors will need all the workers they can get.