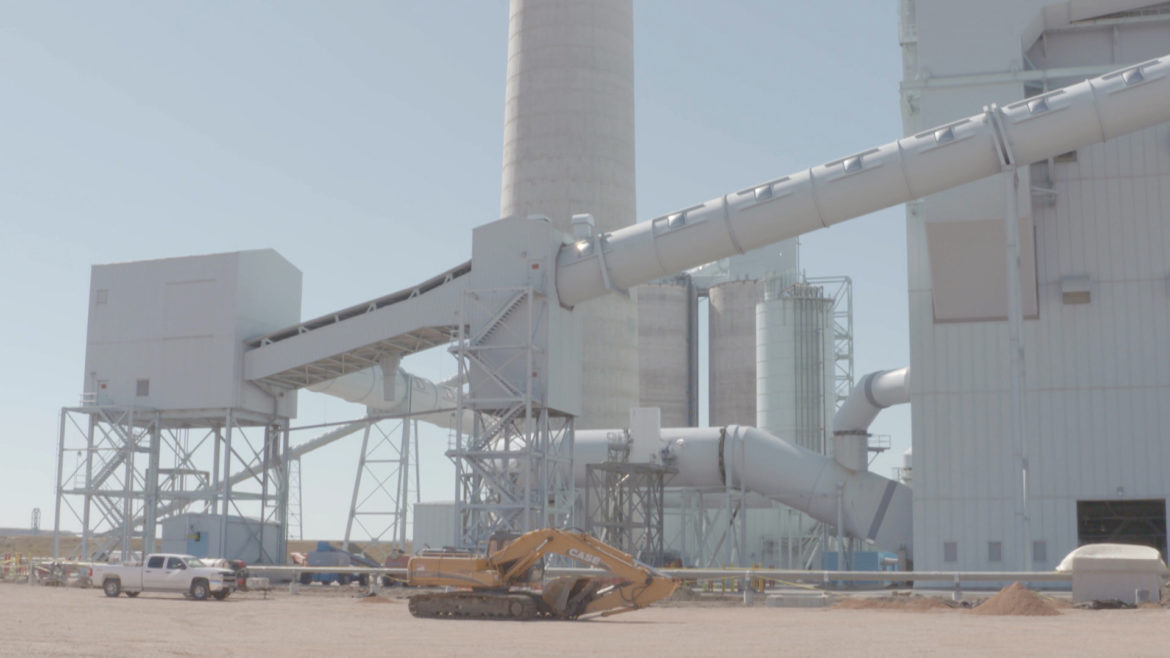 Clean coal is a term President Donald Trump has used a lot, both before and after he was elected.

But what is clean coal? Congress first used the term in the late 70’s early 80’s when discussions about acid rain became a bit more heated. Along came some big changes to the Clean Air Act in 1990 which cracked down on the emissions that cause acid rain, such as sulfur dioxide and nitric oxide.

So we had clean coal! Well, cleaner coal. The definition is a moving target.

Now, the global marketplace is looking for a coal so clean it doesn’t give off carbon emissions, either. And so the nation, and the world, are on the lookout for how to make this new type of clean coal a reality.

And Wyoming’s biggest bet on clean coal is almost finished.

You can find it by going around the backside of the Dry Fork Station, which is a coal-burning power plant outside Gillette in northeast Wyoming. But even then, you may have a hard time spotting it without help.

“It really is kind of a no-frills kind of a thing,” Jason Begger, executive director of the Wyoming Infrastructure Authority, said looking out at the site. “And that’s for two very good reasons. One is it keeps expenses low so we actually have more money to operate the facility as long as we can. But then also it provides for maximum flexibility.”

Begger oversees this multi-million Integrated Test Center. And when he says “no frills,” he’s not kidding. This test center looks like it’s just gravel pads and utility hookups.

There’s also a metal box on scaffolding behind the plant, but it’s harder to see because it blends in with the plant. That box is where some emissions are going to be siphoned out of the plant and piped to pop-up offices or trailers that will eventually sit on the gravel pads. That’s where the carbon capture will happen.

Begger’s actual office is in Cheyenne. He’s one of two full-time employees working for the infrastructure authority, and they have a lot on their plate. According to their website, the authority’s goal is to “diversify and expand the state’s economy by adding value to Wyoming’s energy resources and infrastructure.” The Integrated Test Center, or ITC, is a major part of that work.

Begger sees the ITC’s aim, carbon capture research, as a critical bridge between polarized interests — pro coal on one side and climate change activists on the other.

“It has become really frustrating and it complicates things when it becomes a Democrat versus Republican sort of issue,” he said. “And, you know, [it’s] an engineering challenge.”

One of the ITC’s first research groups will there in early 2018. It will be teams of researchers, actually, competing for the Carbon X-Prize. To win, they’ll try to find the most efficient way to both capture carbon emissions and turn them into the best product. Like shoes or cement or protein powder. The winning team in Wyoming will get a $10 million prize.

Another future client is the Center for Carbon Removal, a California-based nonprofit dedicated to stopping climate change.

“Our shared, common goal is to find these technology solutions,” Begger said. “And it’s kind of strange bedfellows, but it works.”

This test center was funded by private parties and industry, chipping in $6 million and some expertise, and by the state, which put in $15 million.

That’s a big chunk of change for a state with budget issues. Especially as carbon capture so far has proven too expensive for practical purposes.

Still people from coal industry guys to some environmental groups continue to push for clean coal. Or rather, carbon capture, because some don’t really like the term clean coal.

“To some, it’s considered a term of ‘greenwash’ used by the coal industry,” said John Thompson, the director of the Fossil Transition Project at the Clean Air Task Force. “And to others, it’s you know, an aspiration. And I just find that it just makes more sense to just say what you want. To say you’re trying to do with emissions.”

Thompson thinks carbon capture could help fossil fuel industries. But he also believes it’s the only way to mitigate climate change in a world where coal is still a major source of energy worldwide — but, it’s not just coal. While it produces less, natural gas contributes carbon emissions, too. And as of 2010, more than a fifth of the world’s carbon emissions came from industries completely outside of energy production.

“Carbon capture is more than a coal technology,” he said.

One way to move toward this future is with Congressional help. Congress does have some incentives on the books to capture carbon, but they aren’t enough to make pricey carbon capture worth it. So, there’s a bipartisan bill proposed in the Senate called the FUTURE Act that would boost incentives for carbon capture.

It’s sponsored by Democratic Senator Heidi Heitkamp from North Dakota. And it’s cosponsored by 24 other Senators including Wyoming’s John Barrasso.

But, there are still those who think we are already past clean coal.  They say big coal companies had their chance to boost this technology back in the days when they were profitable.

Keep It In The Ground

She called carbon capture an “expensive, unproven, potential technology,” and said that taxpayer money shouldn’t be gambled on it. She points to a swath of clean coal failures: of the dozens of carbon capture projects attempted around the U.S., only a few have worked. And even the successes came at a cost too high for most companies to buy into without government help.

“We think that there are other, much more viable, truly clean energy sources like wind and solar that are ready to go,” she said.

But coal is the biggest single industry contributing to Wyoming’s economy. While wind is on the rise, the coal industry has been suffering. Now, both the state and the industry is working hard on carbon capture because, compared to other industries and other states, they have the most to gain and the most to lose.

Dennis Thorfunson, a plant engineer at the Dry Fork Station, is overseeing the construction of the Integrated Test Center. For him, this technical challenge of catching carbon is purely a practical one.

“From the engineering perspective, the carbon dioxide going up the stack is nothing more, nothing less than a waste product,” he said. “If we can do something with the carbon dioxide and make it profitable, well then everybody wins.”

Thorfunson said this is just another step in clean coal’s evolution. In the past, coal emissions contributed to acid rain, but, at least in this country, those sulfur and nitric oxide emissions have largely been scrubbed clean.

“Well you don’t hear about acid rain anymore,” he said. “You give us enough time, you’re never going to hear about carbon dioxide again.”

Or at least, that’s the dream.

For more information on clean coal and how it affects the region, and even the oil and gas industries, tune in to the extended podcast version of this story. That’ll be coming soon to the Trump On Earth Podcast, Inside Energy’s website and your member station.