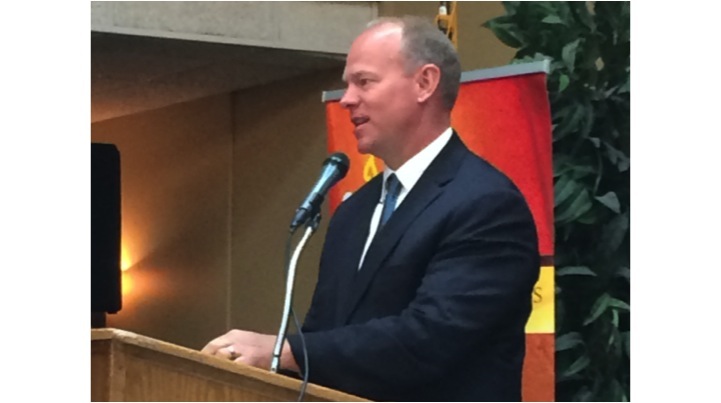 Wyoming Governor Matt Mead speaks about the state's energy future at the Wyoming Business Report's Energy Summit in Casper on May 19. Wyoming Gov. Matt Mead speaks about the state’s energy future at the Wyoming Business Report’s Energy Summit in Casper on May 19.

Power plants are among the largest carbon dioxide emitters, and on June 2, the Obama administration is scheduled to release new rules regulating those emissions.

The predicted effects of continuing to pump carbon dioxide into the atmosphere at current rates range from dramatic sea level rise to extreme weather to famine and drought. Utilities and trade groups are already warning those rules will have some dire consequences of their own.

Industry concerns about the regulations are real, though.

“This will probably be the largest rule in EPA history in terms of cost,” says Dan Byers, with the US Chamber of Commerce. “It’s probably going to be unprecedented also in terms of compliance.”

The regulations will have the biggest impact on the nation’s coal-fired power plants. Already, 20 percent of those plants are scheduled for retirement in the next five years because they can’t meet other earlier emissions regulations.

“With the greenhouse gas rule on top of that, if it leads to further shutdowns, we’re actually genuinely concerned about blackouts,” Byers says.

That’s because coal is an extremely dependable fuel for electricity generation — it’s easily stockpiled and provides a continuous source of power, unlike wind or solar, which can’t be stored, or gas, supplies of which are limited by pipelines. Even if it doesn’t come to blackouts, Byers says the effects will be felt — especially by the people he represents.

“Any major industrial energy user, the reason they come to the United States, is not because we have a labor advantage or some other advantage. Affordable electricity is huge.”

There’s little doubt rates will go up in some places, but exactly how much is a big unknown. Early reports suggest each state will have to cut overall carbon emissions by up to 25 percent, but they’ll get to choose how they do it.

Options might include trading carbon credits, which are given out like brownie points for reducing greenhouse gas emissions, or states could increase use of renewable fuels, or invest in carbon capture technology at existing facilities.

For some states, it probably won’t be difficult to meet the requirements. Colorado, for example, started actively working to cut its emissions back in 2005.

Joshua Epel, chairman of the Colorado Public Utilities Commission, says if the regulations give credit for those past reductions, Colorado ratepayers won’t feel any impact.

“We’ve had a very thoughtful strategy for reducing these emissions, so I think we’re in very good shape,” Epel says.

That’s partly because Colorado isn’t heavily reliant on any one source of energy for power. It’s a different story in Wyoming, the nation’s largest coal producer, and a large coal consumer.

“Setting a target for the whole state and cinching the whole state down, that would be a problem for us,” says Al Minier, chair of the Wyoming Public Service Commission.

Wyoming exports two-thirds of the power it generates. Minier says that means while the energy is consumed elsewhere, Wyoming would be on the hook for the costs associated with cutting emissions.

“Unless you can figure out some way to enforce other states sharing in our reductions because we’re selling it to them, we’ve got a problem,” Minier says.

He doesn’t think it’s likely that other states will agree to hike electricity prices to pay for emissions reductions at Wyoming power plants, especially if it’s cheaper to get power from elsewhere or build new plants in their own states. So, Minier says, if the timeline for reducing emissions is short, that could spell a grim future for Wyoming’s coal-fired power plants.

Legal action would likely ensue. The state is already party to half a dozen lawsuits against the Environmental Protection Agency, and Governor Matt Mead hasn’t ruled out suing over these regulations, too.

But whatever the potential legal battle, the threat of a new rule may be already be pushing the energy conversation in a new direction. Even Mead, a self-professed climate change skeptic, and critic of any rules regulating carbon, says it’s time to start looking at carbon management — capturing and storing or using carbon — as an opportunity.

“When you look at the end of the coal-fired plant and the smokestack, if we can change what’s viewed as a liability into an asset, that provides a lot of solutions,” Mead says.

In that sense, the rule might already be working.