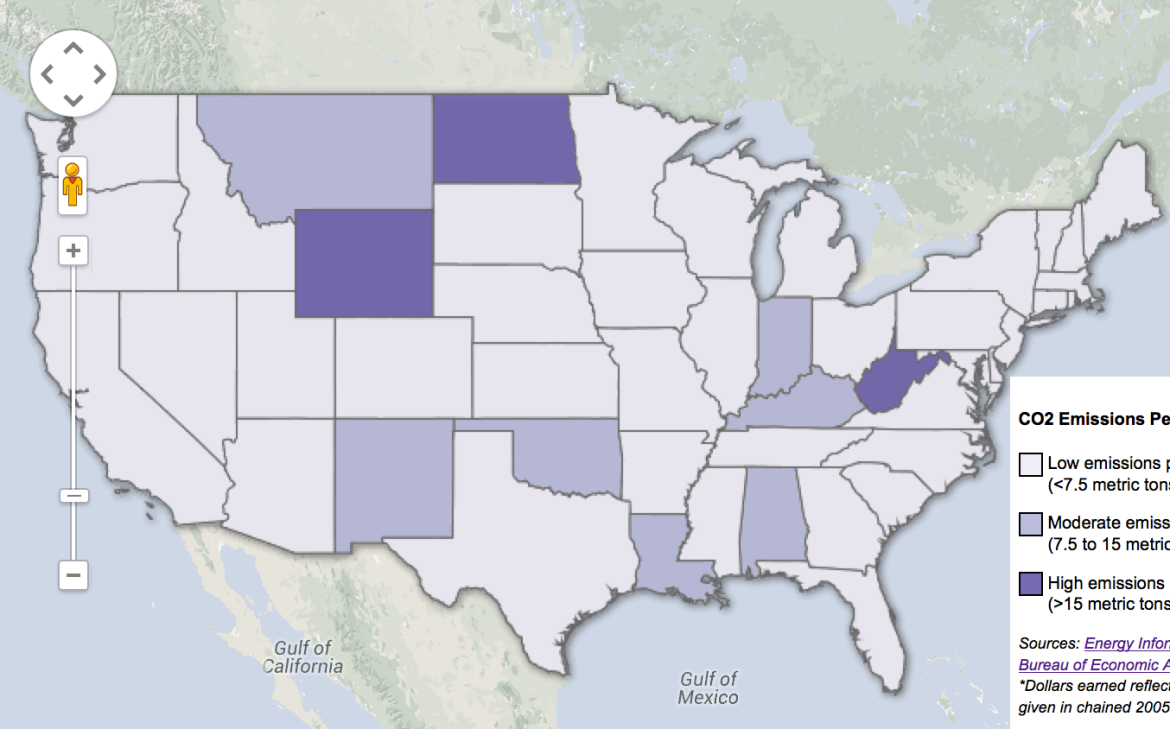 As states ready for the Obama Administration to release new carbon emissions regulations next week, a major question looms: What’s the most sensible way to measure and compare greenhouse gas production?

Two states dwarf all others when it comes to sheer amount of carbon dioxide released: Texas and California. Texas is such a carbon giant that it accounts for 12% of U.S. emissions and produces nearly twice as much as the next closest state, California. This graph shows 2011 carbon dioxide emissions based on Energy Information Administration (EIA) data: But there’s more than one way to slice and dice emissions data. Looking at carbon dioxide produced per dollar earned by industry, the story changes: Wyoming tops all states in carbon emitted per dollar earned, followed by West Virginia and North Dakota.

Here’s how all fifty states measure up on emissions per dollar, based on EIA and Bureau of Economic Analysis (BEA) data: Top overall emitter Texas now falls in the middle, and California is near the bottom. With diverse economies, their energy industries are balanced by other sectors. Wyoming and North Dakota, on the other hand, rely heavily on energy production to drive their carbon-intensive economies.

And how about Inside Energy focus-state Colorado?  Because Colorado’s energy and economic portfolios are diverse, it lands squarely in the middle for both total emissions and emissions per dollar.

Here’s what the emissions and earnings data look like on a map:

The data wrangling doesn’t stop there…

How we measure and compare carbon matters. Next week, we’ll find out what the new emissions regulations entail. At Inside Energy, we’ll be covering what these new regulations mean for Wyoming, North Dakota and Colorado,  and whether it will be harder for states with emissions-intensive economies to keep pace.

Read More: “White House Cracks Down On Power Plant Emissions,” by Stephanie Joyce for Inside Energy and Wyoming Public Radio