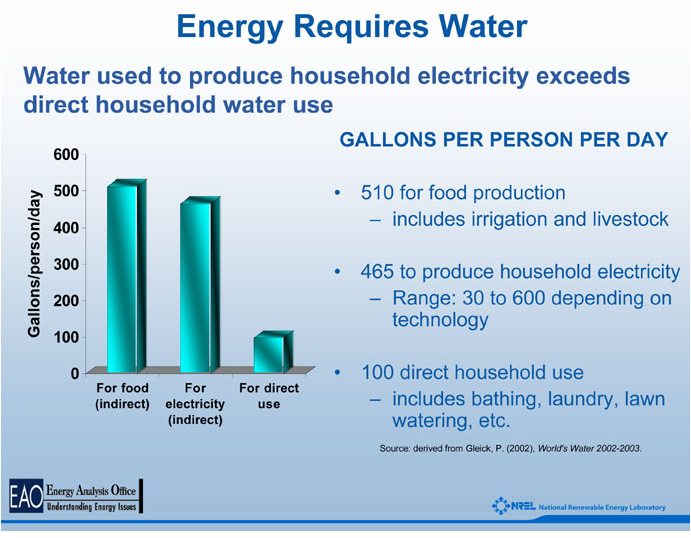 Water use per person per day. National Renewable Energy Laboratories. Of course you need water to wash your clothes, but did you know that you also need water—indirectly—to power your washing machine?

And it also takes water to run your laptop, your dishwasher and to keep your lights on.

That’s because it takes water to create energy. The electricity sector uses 143 billion gallons of freshwater a day to run power plants.  Coal plants typically use 20 to 50 gallons of water to produce one kilowatt-hour of electricity. And that doesn’t even take into account the water needed to mine the coal and store the coal waste.

So how much water does it take—indirectly—to power your washing machine?

According to this report by The Union of Concerned Scientists, the math looks a little like this:

So to run a load takes approximately 7.25 kWh of electricity. And how much water is needed to produce that amount of electricity? That depends on what type of power plant it is, and what technology it uses.  But here are the lower and higher estimates:

By these calculations it could take between three and ten times the amount of water to power the washing machine as it takes to actually clean the clothes. And that is just the water required to run one electrical appliance.

Figure 2: Average daily water use by a U.S. Family of Four. Union of Concerned Scientists.