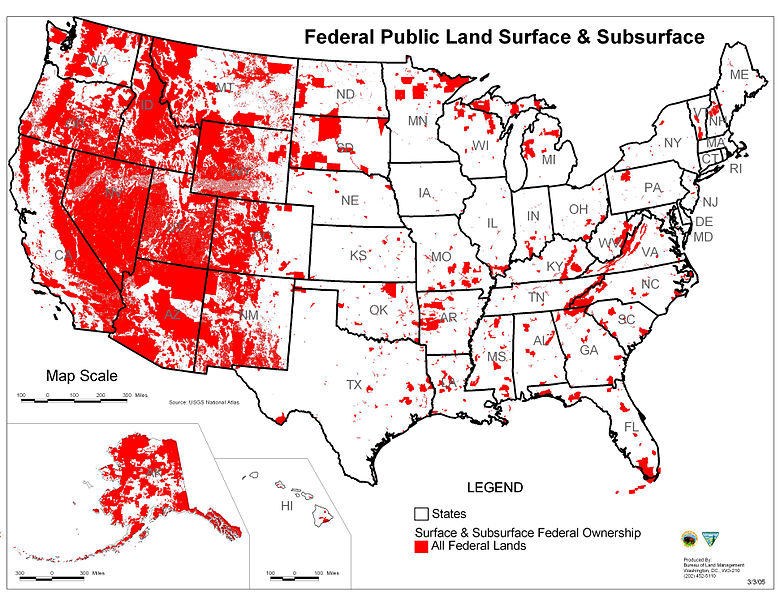 The red areas are federally-owned lands. Nationwide, 28 percent of land is owned by the federal government. In the West, it's closer to 50 percent. The red areas are federally-owned lands. Nationwide, 28 percent of land is owned by the federal government. In the West, it’s closer to 50 percent.

Fossil fuel production on federal and Indian land is down over the past decade, in contrast to a big boost in production across the rest of the country. That’s according to data the Energy Information Administration published this week.

Why does it matter if the land that sits on top of fossil fuels – coal, oil and natural gas – is federal, Indian, or private?

When energy companies extract oil, gas and coal, they lease land and mineral rights from landowners – private citizens, state, local or federal governments, or Indian tribes. For the right to mine, companies pay landowners a portion of the profits, called royalties.

Royalties are big money, often a private landowner’s primary income. For the federal government, royalties provided $14.4 billion in revenue in 2013, one of the biggest non-tax sources of income. And for Indian tribes, mining royalties were nearly $1 billion in 2013.

What’s more, the rules and regulations governing mining differ based on who owns the land.

Where you dig matters.

From the EIA report, we know that…

Why, when oil, gas and coal are booming in the U.S., are they slowing on federal lands?

The Obama administration’s “all of the above” energy policy has been, at least in name, pro-fossil fuel extraction. But critics claim the fact that mining on federal lands hasn’t kept pace with the energy boom seems to contradict that policy.

The Department of the Interior has admitted it’s having trouble keeping up with energy extraction. A backlog of permit applications means oil and gas operators to have long, even indefinite, waits for drilling permits. This “adversely affects developing the Nation’s domestic energy resources,” said a Department of Interior report. “Specifically, the Federal Government and Indian mineral owners risk losing royalties from delayed oil and gas production.”

Or, it could be a question of geology: Many energy reserves happen to be on private land.

Here’s a look at crude oil production in 2013, broken down by federal and non-federal land, for top energy states:

Texas is a huge energy producer, yet almost none of its fossil fuels come from federal lands. Other states with smaller energy economies – like New Mexico and Montana – produced much of their energy on federal lands. Why? Just look at a map: Nationally, 28 percent of land is owned by the federal government, but it’s closer to 50 percent in the west.

This matters because the federal government gives roughly half of the royalties it collects back to the states, who may be making less money on federally-owned land. Federal royalty rates are a charged issue: The U.S. Government Accountability Office has claimed the federal government isn’t charging as much as it could for royalties, which the Department of the Interior has contested.

Natural resource extraction happens within a thicket of local, state, federal, and Indian laws, rules and revenue streams. Who owns the land dictates where the money goes and how the drilling and mining is regulated.

Tomorrow, Inside Energy will take a look at fossil fuel production on Indian lands, and what this means for tribes.