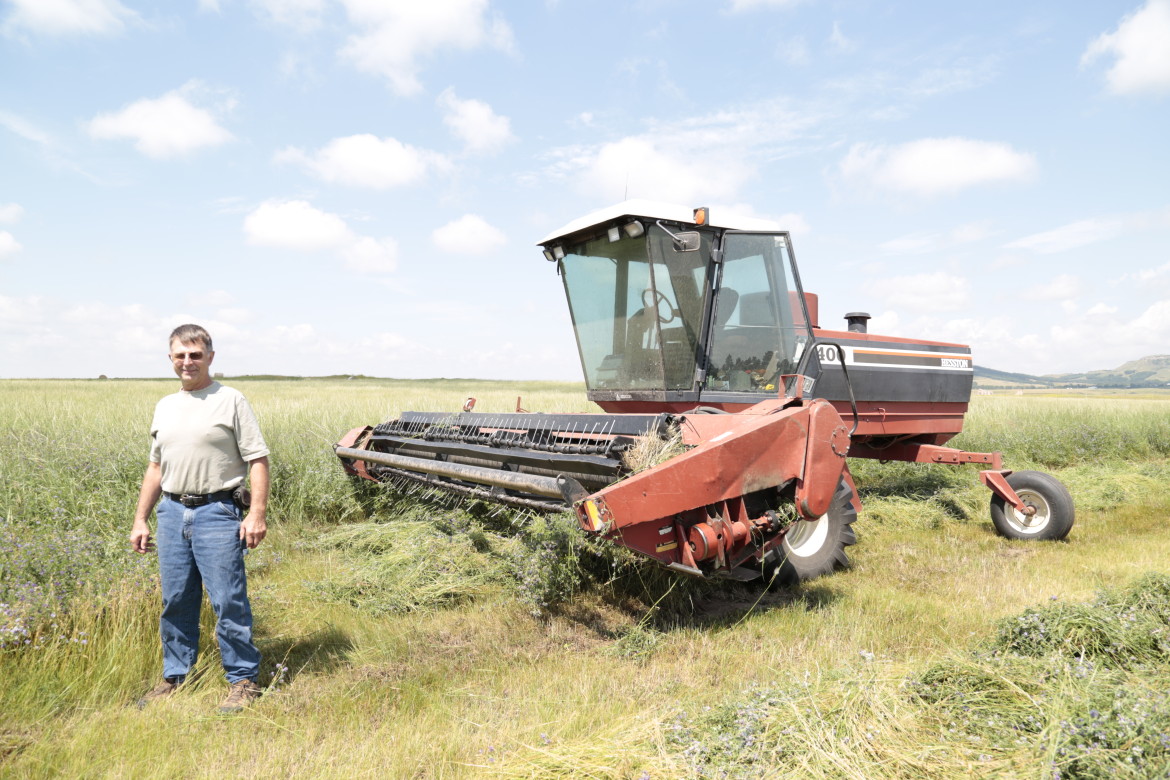 Lorin Dvirnak is a farmer outside Killdeer, North Dakota. Farming and ranching have always been the biggest industries in North Dakota. But now, oil has knocked agriculture from the top spot. Mining — which includes oil — is now worth $8.5 billion dollars in the state. Agriculture is closer to 7 billion. It’s a milestone for a state that had hardly any oil production 10 years ago, and the change has created some tension.

That tension is visible in Killdeer, North Dakota — especially at the local Western Choice Co-op. It was founded by local ranchers and farmers in 1935, but it’s not just a farmers’ store anymore. Now, there’s lots of merchandise targeting oil industry workers  — like giant pipe wrenches and $70 fire resistant sweatshirts that manager Jesse Sipe said are “specifically designed for explosions on the oil rig. There’s no farmer that’s ever going to need that.”

In the past few years, the new customers, with all their oil money, have been getting priority over the old ones at the co-op.  And that bothered ranchers like Taylor Bang, who is one of the co-ops’ members.

“We see our groceries higher, we see our restaurant prices higher,” he said, but there was nothing anyone could do. The co-op is different. “We felt like we had a little control over that because the customer is the owner.”

This spring, the co-op booted out its president and hired new store managers that are friendlier to agriculture. The co-op in Killdeer, North Dakota.

The tension isn’t unique to Killdeer — its a reality all around North Dakota.

“Maybe it’s kind of the shiny object theory sometimes,” said Ryan Taylor, a rancher from the central part of the state. “Where something shiny and new comes along and there’s a bit of a honeymoon period there.”

Taylor is running for state agriculture commissioner in a race that’s as much about oil as it is about ag. That’s because the agriculture commissioner is one of three people in the state who regulates the oil industry.  He’s proposed something radical for North Dakota — a land owner’s bill of rights that would protect farmers from the worst impacts of the oil industry.

“We’re going to harvest oil for 30 or 40 years,” he said. “But it will end at some time. So we need to make sure in the meantime that agriculture is healthy and it’s not forsaken.”

Farmers have a couple things to worry about, he said. One is the huge backlog of grain shipments that’s disrupting farms around the upper Midwest. BNSF is the major railroad here, and its running about a month behind. That means many grain elevators are still full of last year’s harvest. They won’t have space to take in new crops until they’re emptied. Many people blame the delays on the fact that there are more oil trains clogging the tracks.

Farmers also worry about spills, especially saltwater, which is a product of the drilling process. In the past year, there have been almost 800 saltwater spills in North Dakota, and they can sterilize the soil for decades.

But not everyone thinks the oil boom is making life worse for farmers and ranchers.

Lorin Dvirnak farms just outside Killdeer. He’s got oil on his land — two pumpjacks are nodding just beyond the hayfield — and he gets a check from an oil company for a few hundred dollars every month.

People around the state are making more money, too. Per capita personal income is almost twice as high as 10 years ago. And a lot of that is related to the oil boom.

So it’s not surprising that many farmers and ranchers say the benefits of the boom outweigh the costs. And not just because it lets them buy newer equipment or pay off debt.

“One of the things that’s been good is it’s brought back young people that have had to leave the state of North Dakota to find a job,” said Donna Scott, a rancher and a Dunn County commissioner who lives outside of Killdeer.

“I think sometimes industry gets a bad rap, but on the same token, this is what has kept these small communities alive, and healthy and growing,” she said. “And so from that perspective, I look at it as a positive thing.”

One thing everyone can agree on is that the oil boom will end eventually. And when it does, it will be farmers and ranchers who keep the place going.