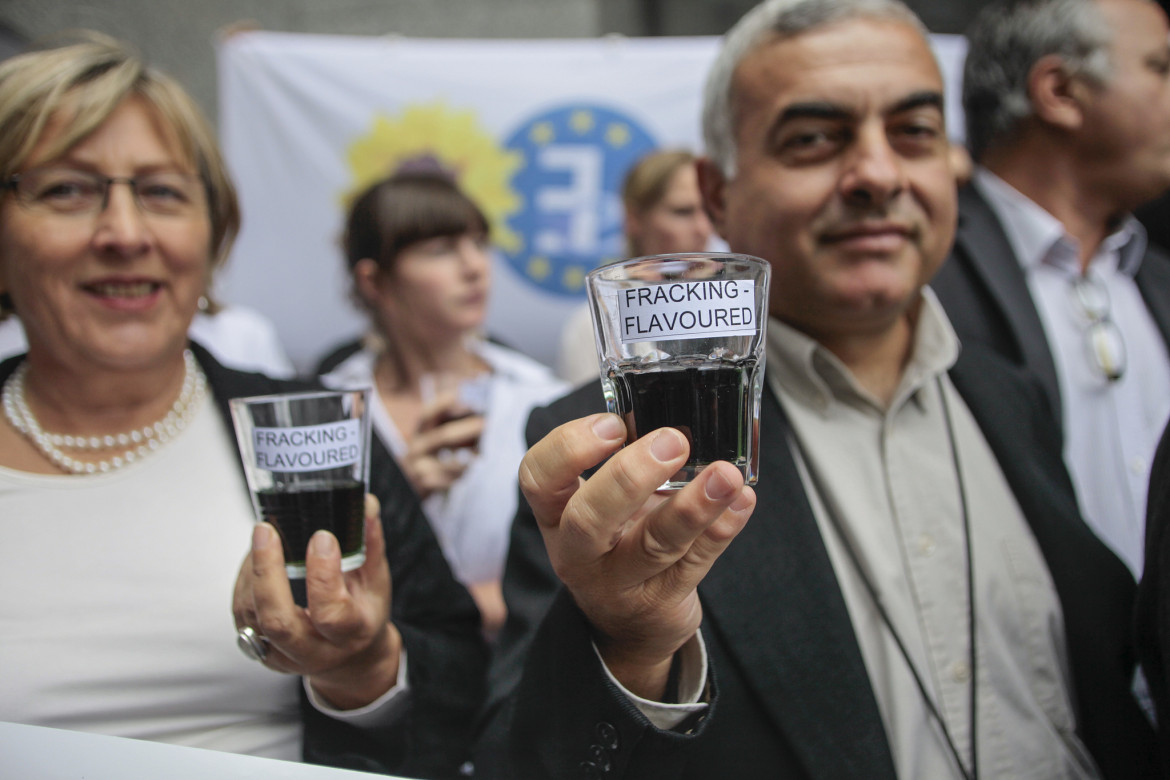 Anti-fracking activitists pose with "fracking flavoured" water outside the European Parliament. Image from Greensefa via Flickr, used with a Creative Commons Attribution License. Anti-fracking activitists pose with “fracking flavoured” water outside the European Parliament. Image from Greensefa via Flickr, used with a Creative Commons Attribution License.

For people who live in close proximity to this country’s current oil and gas boom, are there health risks?

It’s a question people are asking from Pennsylvania to North Dakota, from Colorado to Texas, as more and more communities find themselves in the midst of  unprecedented energy development.

Inside Energy met with health researchers, scientists and engineers to learn how oil and gas drilling affects your health and to clarify the confusion about the issue. A Colorado-based research collaboration – the first of its kind – is bringing more than 40 experts together to study natural gas development from all angles to understand the risks and benefits.

A lot of concern around the safety of unconventional oil and natural gas exploration – commonly known by the shorthand fracking – centers on frac fluid: It’s the stuff well operators inject into the ground to shake loose the oil and gas.

Industry representatives will tell you that 99.5 percent of frac fluid is just water and sand, and the rest is common household chemicals. To prove it’s safe, they’ll even drink it. Here’s a video of natural gas executive Peter Dea:

But anti-fracking activists, sometimes in song, will tell you about the hundreds of scary-sounding chemicals in frac fluid. Here’s Joel Kalma:

Both sides are right. But, according to scientists, the truth is somewhere in the middle.

Lisa McKenzie, an epidemiologist at the Colorado School of Public Health, said, “That other 0.5% is important from a health perspective.”

And while the long list of chemicals contained in most frac fluids may be intimidating, “The fact that we’ve got 1,000 shouldn’t alarm people,” said Joe Ryan, a professor in engineering at the University of Colorado who studies how drilling affects groundwater.

To figure out what chemicals we need to worry about, Ryan looked at three main factors: toxicity, mobility, and persistence. That means how dangerous those chemicals are to humans, how likely they are to move through the soil and water, and how long they stay in the environment before they degrade.

Using those factors, Ryan said, “We take a list of 1000 and get down to a list of a couple dozen,” Ryan said. “We should be watching for these chemicals, because they could actually show up somewhere.”

Ryan is the lead researcher on a $12 million grant from the National Science Foundation to study how natural gas development affects communities from all angles: ecology, health, economics, even sociology.  In addition to figuring out what aspects of drilling might harm people, the collaboration – called Air Water Gas – also looks at the benefits of the natural gas industry. They are developing a research-driven decision matrix people can use to decide if the drilling industry is something they want in their community, and if so, how to regulate it.

This project grew out of a public demand for unbiased, trustworthy information about drilling.

A few years ago, the University of Colorado started getting calls from people asking for information about fracking: They wanted to know if they should be worried about their drinking water and they didn’t know where to turn to find answers.

So the university forwarded those calls to Mark Williams, a hydrologist. To meet the demand for information, Williams developed a guide for people living near oil and gas development to learn how to test their well-water and get baseline information about their water quality.

How big of a concern is water contamination?

Williams referenced the videos of people lighting their tap water on fire, and said, “a lot of that is real, and what they’re lighting on fire is methane.”

But having methane in your water, while scary and gross, isn’t actually a health hazard. “There are no human health effects for methane,” said Williams. “Unless of course you blow up your house, which is not a good thing.”

But Williams and Ryan agree on this: There are other, dangerous drilling by-products that can contaminate groundwater, and it’s been documented. Information about 243 cases was just released in Pennsylvania.

Oil and gas extraction activities have the potential to contaminate groundwater. Oil and gas operators take great care to isolate extraction activities and byproducts from the environment. Nevertheless, energy development is an industrial activity conducted by human beings in all the contingency, and uncertainty of the real world….Mistakes and mishaps can introduce contaminants into groundwater systems or mobilize gases and contaminants from elsewhere in the subsurface. The fluids involved in gas extraction – be they introduced fluids, such as those used for hydraulic fracturing, or produced fluids, such as those drawn from deep underground – typically contain salts, metals, and other potential toxins in concentrations that may be harmful to humans.

But groundwater contamination is very rare, and for it to happen, generally something has to go wrong in the drilling process.

Air pollution from oil and gas development is a real risk

John Adgate, a researcher at the Colorado School of Public Health, said water contamination is of less concern then, “the traffic and the noise and air pollution that are around these sites.”

Trucks and construction equipment – in addition to causing traffic accidents – bring diesel exhaust and dust to communities. Extracting and transporting oil and gas can release pollutants like benzene and ozone. Although scientists – including those on Ryan’s team – are still learning how these pollutants move through the atmosphere and interact with the environment, we know they can be dangerous to humans. The National Institute fior Occupational Health and Safety (NIOSH) has issued a hazard alert to oil and gas workers about dust inhalation, and recently announced results of a study that showed cancer-causing chemical benzene is present in worker’s urine at unsafe levels.

Because oil and gas drilling is happening in residential areas, people who don’t work at well-sites may need to worry about these air pollutants, too.

When it comes to oil and gas drilling, our track record of using scientific research to make policies and regulations hasn’t been great.

For example, how far do oil and gas wells need to be from homes and schools? This is called set-back distance, and in Colorado, when new rules were decided in 2013 increasing the distance to 500 feet from homes and 1,000 feet from schools, Ryan said, “It was freely admitted that no scientific information went into the current choice.”

That’s what the Air Water Gas project aims to change. In the case of the Colorado set-back rule, policy-makers couldn’t use science to drive regulations because at that time it just didn’t exist.

“From a health perspective, there’s very little evidence of the distance wells should be located from homes,” said McKenzie. She is part of Ryan’s research team and looks at health effects – like the rate of birth defects in babies born to mothers living near wells – that can help fill in that knowledge gap.

No industry – including oil and gas – will ever be completely free from risk. But understanding those risks is the only way we’ll be able to evaluate them.

“There are risks that we accept and risks that are imposed upon us,” said Ryan. For many communities, the fracking boom has been a risk imposed. “And we get a lot more concerned about the risks imposed upon us than the ones we accept.”

With more science, communities can learn what they should – and shouldn’t – accept.