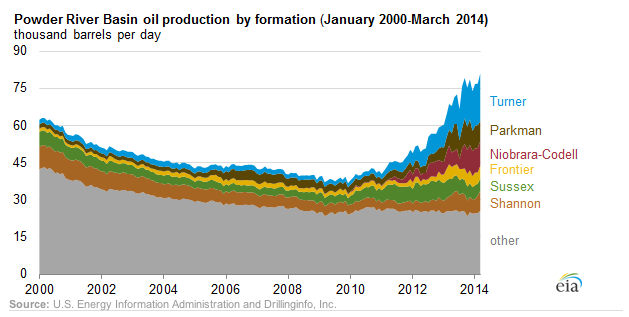 Fracking has led to a huge upswing in oil production in Wyoming’s Powder River Basin, according to a new report by the U.S. Energy Information Administration.

Inside Energy’s Stephanie Joyce predicted this back in early August when she reported on the signs of a boom in the northeast corner of the state.

According to the EIA report, the Powder River Basin, which has long been the heartland of Wyoming’s coal production, is now producing 78,000 barrels of oil per day, up from 38,000 barrels per day in 2009.   Production growth is centered in three formations — the Turner, Parkman and Niobrara-Codell, as can be seen in the chart posted above.  What does that mean in terms of new wells? The report says that more than 590 oil wells have been drilled and completed in the Powder River Basin since January of 2009. Horizontal drilling and hydraulic fracturing – that is, fracking – is largely responsible for this uptick in production.  As the report confirms, these new techniques mean larger portions of the formations have become profitable for commercial oil production.  In Joyce’s report, linked above, she quotes from an IHS analysis by Stephen Trammel entitled, “Reviving the Conventional”:

In other words, conventional drilling in the Basin only retrieved about 34 percent of the oil.  So-called “unconventional” drilling can recover some of the remaining 66 percent.

On the ground that translates into lots of changes for area residents — both good and bad.

For some of the bad impacts of the boom, see Wyoming Public Radio’s story on an increase in illegal waste water dumping.