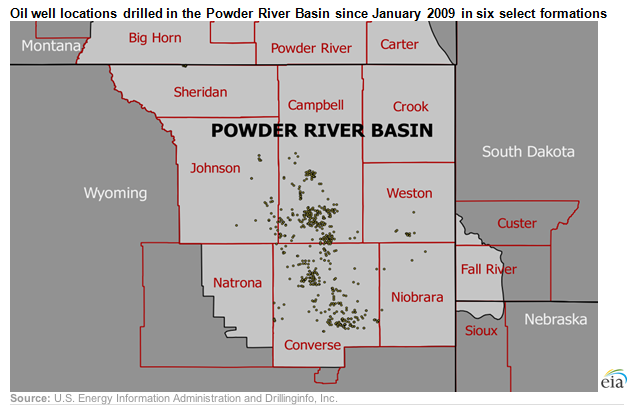 Horizontal drilling and fracking have prompted an oil boom in Wyoming’s Powder River Basin, Alisa Barba reported earlier this week. But an increase in drilling — 590 oil wells have been drilled and completed in the Powder River Basin since January of 2009 — has its consequences.

Mead Gruver from the Associated Press reported yesterday that 2014 has already been the state’s worst year for oil spills since 2009.

Almost 220,000 gallons of oil already has spilled in Wyoming this year, more than double the 90,000 gallons all last year. About 165,000 gallons spilled in 2010, the previous worst year since the Wyoming Department of Environmental Quality began tracking spills in a database that year.

Many of the spills have occurred in the Powder River Basin, which is quickly going from being the heartland of the state’s coal production to becoming the epicenter of the Wyoming oil boom.

Although more than 100,000 gallons of oil spilled within a month last spring, all within infrastructure owned and operated by Belle Fourche Pipeline, the D.E.Q. will not be pursuing fines from the company. The department decides whether to pursue fines on a case-by-case basis, and investigates whether there was negligence on the company’s part, Gruver said.

The public has gone largely unaware of the spills:

None of the federal or state agencies with purview over oil infrastructure and public lands in Wyoming actively notifies the public about oil spills except in extreme cases.

“Unless it’s going to have an impact on public health, that’s where we would notify the public,” Department of Environmental Quality spokesman Keith Guille said Thursday.

Nevertheless, the D.E.Q. is working to develop a spill database accessible to the public. Environmental advocacy groups hope this would help encourage companies to prevent more spills.