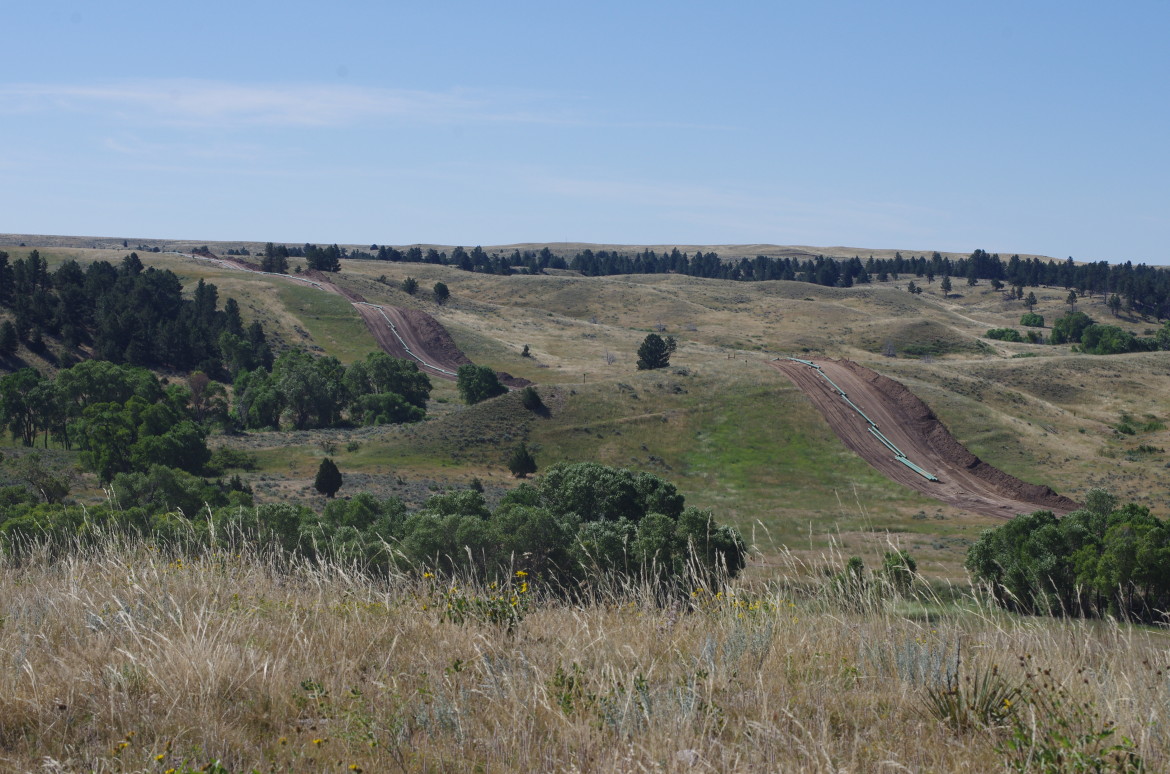 Rocky Foy has 11 pipelines on his property near Glendo. A twelfth is currently being constructed by Hiland Partners. There’s a huge, mostly invisible web of pipelines crisscrossing the country that make it possible for our stoves to light and our cars to turn on. Those pipelines run from oil and gas producing regions to refineries and processing plants, crossing miles of private property along the way. In recent years, the companies that own and operate those pipelines have raked in record profits, but the people whose land they cross haven’t often benefited. Now, that appears to be changing.

Driving across parts of Rocky’s Foy property is like being on a roller coaster. There are twelve pipelines that cross his cattle ranch outside of Glendo, Wyoming.  The gravel road rises over each one of them, and then drops back down. As we bumped along on a recent morning in his pickup truck, Foy joked: “The only lottery I ever won in my life is all the pipelines.”

It’s a lottery he wishes he hadn’t won — and one he didn’t choose to enter. In Wyoming, as in most states, pipelines have the power of eminent domain, which means they can cross private property, with or without the owner’s permission, so long as the companies offer “reasonable compensation.”  The first pipeline on Foy’s property was built in 1927, or thereabouts.

“Grandpa let them come across for basically nothing. He sold them beef, a beef, every day because they had to stay on the line,” Foy said.

While he no longer accepts beef purchases as payment, Foy says it can be hard to negotiate good deals as a single landowner up against a billion dollar company. “They come and pick you off, one by one,” he said, referring to pipeline companies sending landmen to negotiate one-on-one with landowners. But things were different with the latest pipeline laid on his property — number twelve. The “Double H” is a crude pipeline that will run from North Dakota to Guernsey, Wyoming, where it will hook up with another pipeline.   Instead of trying to negotiate with the pipeline company on his own,  Foy banded together with other landowners along the pipeline route.

“And then it give us so much more clout because we had one voice instead of 200 small voices,”  Foy said.

As simple as it sounds, collective bargaining was a novel approach. Attorney Frank Falen, who represented the group, says the goal was to get better terms.

Risks that range from the obvious, like fires and spills, to the less expected. Foy tells the story of shooting at a coyote once, and accidentally hitting a natural gas pipeline on his property. “It sounded like you were standing behind a jet taking off,” he said. “It was just roaring.” But Foy was lucky. “It scared the coyote, and it scared me, but it didn’t blow up.”

But the collective effort on this new pipeline wasn’t easy to organize.

“They deliberately made it very difficult, as difficult as possible, for the landowners who were trying to figure out who else was going to be impacted,” Falen said.

Even today, if you google the Hiland pipeline, you won’t find a detailed map to reference. And the pipeline is 462 miles long.  Hiland didn’t respond to interview requests, and two other pipeline companies who operate in this region also declined to comment on this story.  But the landowners in Wyoming certainly got Hiland’s attention.

“It got to the point where CEO of Hiland was getting some of his guys, and their corporate lawyer, and getting on their jet and flying up and talking,” Rancher Rocky Foy said.

The final contract, including appendices, is over 70 pages long, according to Foy. It touches on everything from reclamation of the land to gates that need to be shut.

“There’s no grey area, everything has been discussed, spelled out on paper,” Foy said.

And the payment — close to $50 thousand dollars a mile. That might sound like a lot, but to put it in context, Hiland recorded profits in 2013 of $36 million dollars, up from $18 million the previous year. And it’s not alone in its success. Oil pipeline profits have reached record highs in recent years, even as companies sink lots of money into infrastructure. Foy knows so long as it’s profitable, the pipelines won’t stop.

“Once you get a pipeline corridor started on you, I mean, I just can’t foresee it ever stopping, until we find a different source of energy,” Foy said.

By one estimate, half a million miles of pipeline will be build in the United States over the next two decades. The Double H isn’t even in the ground and another company has already contacted Foy, to let him know they’re thinking about running a pipeline across his property. But this time, if they do, he won’t be negotiating alone.

This story has been updated to reflect the fact that Hiland filed a general routing map with the Federal Energy Regulatory Commission. The original story said there was no publicly available map of the pipeline route.