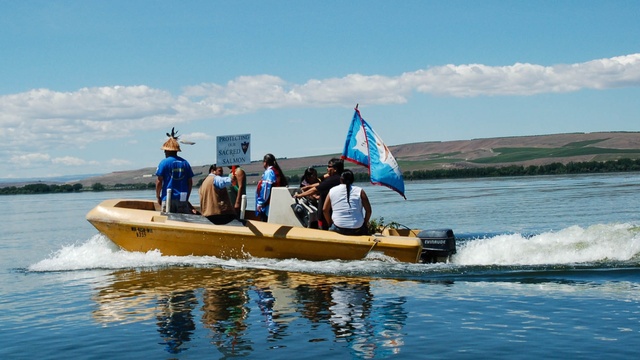 Wyoming Gov. Matt Mead has invited Northwest tribal leaders on an all-expenses-paid trip to see the coal operations in his state.

Treaty fishing rights give Northwest tribes extra clout when it comes to the future of proposed coal terminals on the Columbia River and Puget Sound.

That’s not lost on the governor of Wyoming, a big proponent of coal exports.

Gov. Matt Mead is inviting Northwest tribal leaders on an all-expenses-paid trip to coal country in Northeastern Wyoming, according to an email obtained by EarthFix.

The governor’s invitation went out to tribes in Oregon and Washington, including the Umatilla, Yakama, Swinomish and the Lummi.

The governor’s office did not answer specific questions about the invitations, but released a statement saying the trip would “showcase Wyoming’s coal and rail industries, the benefits of low sulfur coal, world class reclamation and the economic benefits coal provides to the local community.”

The statement, sent by email from Michelle Panos, the governor’s interim communications director, says that Wyoming has been hosting policy makers from the Pacific Northwest for the last few years, and “Wyoming recognizes tribal leaders as key policy makers.”

Tribes have been vocal critics of coal exports in the Northwest, and their treaty fishing rights give them unique power to stop terminal developments. It’s unclear whether the free trip to Wyoming is intended to change their stance. The two-day tour would visit one of the largest coal mines in the world, a power plant and rail operations, according to a Sept. 25 email sent by Loyd Drain, executive director of the Wyoming Infrastructure Authority. And the state of Wyoming would pick up the tab.

“The Wyoming Infrastructure Authority, an instrumentality of the state of Wyoming, would be pleased to provide for the cost of airfare; lodging; transportation in Wyoming; and meals,” Drain wrote in one of the emails.

The invitation calls the tour “an opportunity with an up-close look at the operations being conducted in an environmentally friendly manner.”

Chuck Sams, spokesman for the Confederated Tribes of the Umatilla Indian Reservation, said the chairman of his tribal council, Gary Burke, received an invitation last week but hasn’t decided whether he will accept.

“We received an email from the governor of Wyoming inviting us out,” Sams said. “We haven’t made any decisions regarding the invitation.”

Earlier this year, the Umatilla and several other tribes argued successfully that a proposed coal export project on the Columbia River would interfere with their tribal fishing rights.

The state of Oregon denied a permit needed to build a dock for the Morrow Pacific project in part because tribal members say they fish at the proposed dock site. Mead visited another proposed coal export terminal site in Longview, Washington, earlier this year to show his support for the project and tour the facility. The Millennium Bulk Terminals project would export up to 44 million tons of coal a year from Wyoming and Montana to Asia.

“That’s a lot of coal, but relative to the amount of coal we produce it’s 10 percent,” Mead said during his visit. “So this port and other ports are important to Wyoming in terms of the coal industry.”

Wyoming produces around 400 million tons of coal a year. With the U.S. tightening regulations for coal-fired power plants, Mead said he sees exports as a key part of the coal industry’s future.

Not All Tribes Agree

The Powder River Basin coal reserves of Wyoming and Montana are partly located on tribal land. The Crow Nation signed a deal with Cloud Peak Energy, giving that company the option to mine up to 1.4 billion tons of Crow coal. Some of the coal mined there would be exported through terminals proposed to be built in Washington. The move pits the Crow against tribes in the Northwest, which oppose coal exports.

“The economic viability of the Crow Nation is closely tied to our ability ship natural resources, especially coal, out of Montana,” said Crow Tribal Chairman Darrin Old Coyote. “Energy exports are a key piece of our future well-being and we are encouraged by this proposed rail and port infrastructure in the Northwest that will help grow interstate commerce.”

As for the all-expenses-paid trip to Wyoming coal country, Timothy Ballew, tribal chairman of the Lummi Nation, whose lands are adjacent to the site of the proposed Gateway Pacific Terminal, said he will not be attending. Chairman Ballew and the Lummi council sent a letter in response to the Wyoming governor’s offer. In it, Ballew said, “there is no purpose to be served by accepting your offer. We are well aware of the nature of the coal mining industry and its impacts on the environment.”

The letter goes on to say that the operation of the Gateway Pacific Terminal represents “an unacceptable and unavoidable interference with our treaty fishing rights … and will result in the desecration of an area of great cultural and spiritual significance to our past, our people, and our ancestors.”

This story was shared with Inside Energy by EarthFix, a public media collaboration in the Pacific Northwest focusing on environmental issues.