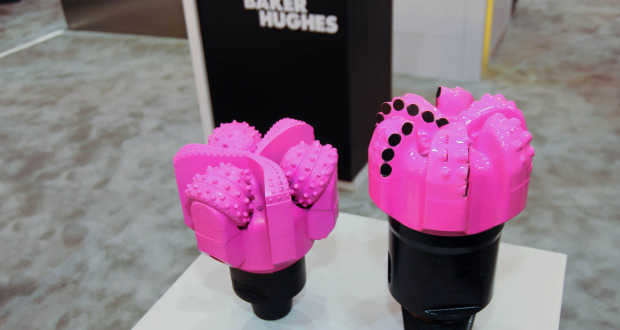 Everything is tinged pink this month to raise awareness about breast cancer, and the color is popping up in some unexpected places–like on oil rigs. For the second year in a row, Baker Hughes is showing support for Susan G. Komen Foundation by painting its drill bits pink.

The thousand drill bits being distributed to customers around the world have the slogan: “Doing our bit for the cure” and come with breast health information.

The cause is personal for Debo, who lost his mother to breast cancer when he was a senior in high school.

Baker Hughes has been a longtime supporter of the Susan G. Komen foundation, donating $100,000 to the organization last year. As they announced in a press release, they plan to present another donation at the final Pittsburgh Steelers National Football League “pink-out game” on October 26 at Heinz Field in Pittsburgh.

While any effort to increase awareness on a disease that affects 200,000 women each year is important, the gesture is making some wonder whether Baker Hughes is using the pink drill bits as a marketing device.

According to the Dallas Business Journal:

“Here’s what I’m wagering that a roughneck does not learn from the literature shipped with his drill bit this October: I’m betting he does not read about the recent study from the U.S. Center for Disease Control that found dangerous levels of benzene in the urine of workers in the unconventional (aka fracking) oil and gas industry,” Steingraber wrote. “Benzene is a proven human carcinogen.”

This isn’t the only strategy Baker Hughes has implemented to connect with the public and help it’s public image. Earlier this month, the Wall Street Journal reported that the company started to list all the chemicals used in their fracking wells to “increase public trust in the process of hydraulic fracturing.”

Fracking continues to be a controversial topic, and companies, environmental groups and politicians alike are fighting to get the public on their side.

Health is one of the major concerns when it comes to fracking. As Jordan Wirfs-Brock and Leigh Paterson recently reported, people on both sides of the issue have to get creative to prove their point.

From writing songs about the chemicals in fracking fluid to sipping on frack cocktails, the ploys to scare or appease the public mostly distract them from learning the truth, which isn’t always easy to determine.